A call to queer Austinites: Your voice is needed at the Capitol 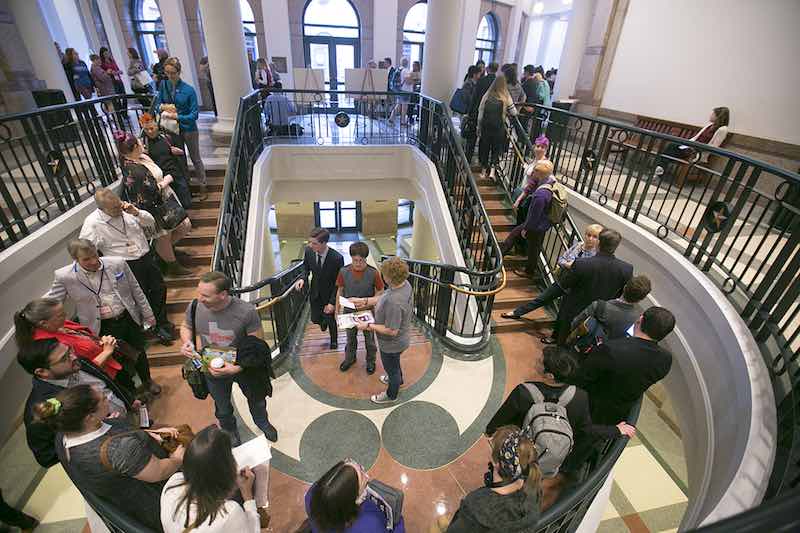 What it can look like: A snapshot of Texans lining up to testify against 2017's bathroom bill. (Photo by Jana Birchum)

Consider this your rallying call.

The Texas Legislature, with a month left before closing day on May 27, is moving quickly through a number of bills, including six that would greatly and detrimentally affect the state’s queer and trans residents. While last session’s bathroom bill bs was squashed, conservative lawmakers continue to push anti-LGBTQ legislation and without pushback from the state’s queer communities – and allies – these bills could easily become law.

Equality Texas, the state’s largest LGBTQ advocacy organization, says there’s an “urgent” need for folks to come out and testify against pending bills. Among them, Senate Bill 17 has gained the most traction. Earlier this month, the bill, which would create “religious exemptions” for anyone licensed by the state – from doctors to tow truck drivers – to freely discriminate under the guise of "sincerely held" religious beliefs, passed out of the Senate and has been assigned to the House State Affairs Committee. EQTX and other advocates suspect SB 17 could be heard by the committee as early as Monday (April 29) or Wednesday (May 1). “We need people to testify to put a stop to bills,” explains EQTX’s Angela Hale.

For those who haven’t testified at the Capitol before – or purposefully blocked all memories of 2017’s transphobic bathroom battles – Hale confirms: it’s easy. On the day of the hearing (yes, it has to be the day the Committee is conducting the hearing), bill-opposers should head to the Capitol and register to testify as a witness at either the kiosks provided (often located in the hallway between the main concourse and legislator offices in the Capitol Extension on the E floors), or via your phone or laptop once you connect to the building’s wifi.

Have a fear of public speaking? Afraid you’ll curse out a transphobic lawmaker? (We hear ya.) Then choose “don’t testify” at that same kiosk and, instead “drop a card” against the bill you’re trying to kill. Hale notes that while EQTX encourages folks to share their stories via testimony, any and all help is especially needed now and registering against discriminatory bills goes a long way. Lawmakers, she says, are actively counting how many people are for and against bills so “numbers and stories from real Texans matters.”

Other legislation gaining traction – and worth watching out for – include Preemption Bills SB 2485, 2486, 2487, which discreetly target local nondiscimination ordinances that currently protect LGBTQ workers in cities like ours and Dallas. These too have passed through the Senate and have been referred to the House State Affairs Committee, which heard House Bills 1035 and 3172 on Wednesday, April 17, but have not yet moved either forward. The two additional religious exemption bills would allow businesses, licensed professionals, and government officials to “use religion to exempt themselves from nondiscrimination laws and policies, including licensing and professional standards,” explains EQTX.

Make no mistake, if these bills become law, every arm of the LGBTQ umbrella will feel their effects – though the burden will likely fall more heavily on our trans and nonbinary communities, QPOC folks, disabled queers, and those with limited financial support. Last week, EQTX’s Interim Executive Director Samantha Smoot said in statement: “Collectively, these bills would swing open the doors to discrimination against LGBTQ folks” and create a future Texas “where every employer, small business, and hospital chooses who they will serve and who they will not serve, based on that person’s identity.”

Because we call the Capital City home, queer Austinites, and our allies, have been tasked with stepping up, voicing our dissent, and fighting back.

Hearing schedules can be found on the Texas Legislature’s website, but to ensure you stay up-to-date and in the know, you can sign up for Equality Texas’ action alerts here. Breaking updates will also be shared via the organization’s Facebook page. And for additional information on how and when to testify, visit EQTX’s Testify at the Texas State Capitol 101.