Thirty strangers bound together at a campground in the small town of Marble Falls, Texas, await their host, while across Lake Ted a Texas-born star and performer prepares her grand entrance.

Wearing a neon dress completed with long flowing cape, she climbs onto a platform 10 feet off the ground. Seconds later, the crowd of campers cheers as drag queen Alyssa Edwards zip-lines across the water bank, braving the speed and height in her full ensemble – makeup, wig, and all. 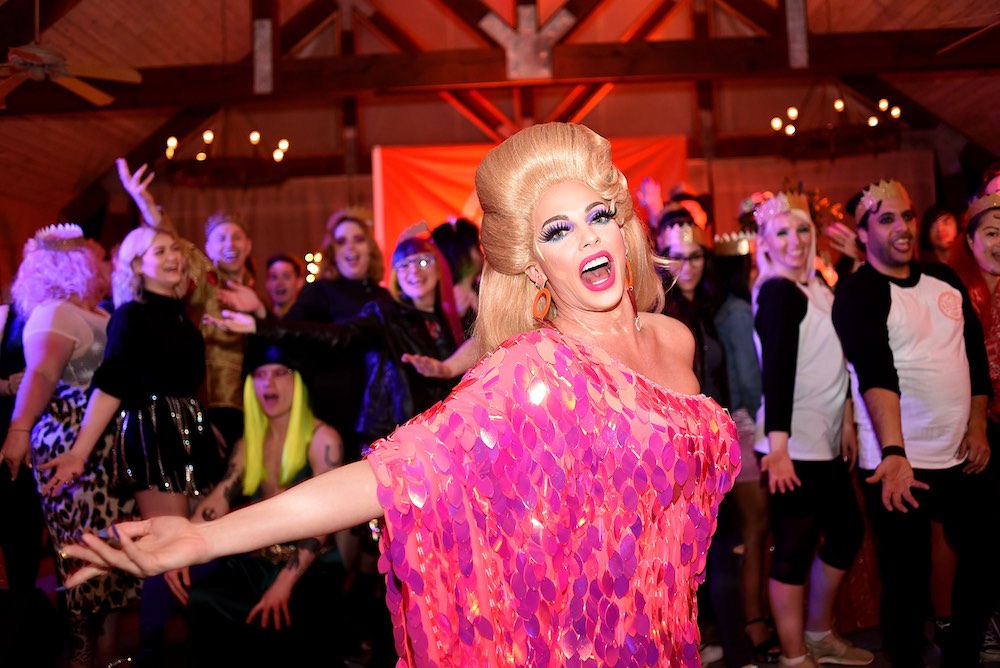 “I was shaking!” Edwards, a fan favorite from RuPaul’s Drag Race season five and the ensemble Drag Race All Stars season two, tells Qmmunity with a laugh. “I am definitely afraid of heights. I landed, my hair was a little windblown, and I walked over to meet the campers for the first time.”

The preparation for this began back in October 2018, when Tazo Tea Company launched its “brew the unexpected” campaign, encouraging consumers to step out of their comfort zones to live life to its fullest. That’s where Edwards’ (aka Justin Dwayne Lee Johnson) role in the campaign starts. The tea company selected Edwards as both the face of Tazo and the camp director for Camp Tazo, a three-day adult sleepaway camp held March 15-17 right outside Austin. (Though the camp coincided with SXSW 2019, Qmmunity was told there was no connection.)

Which brings us back to the 30 strangers – the lucky few who were selected out of 5,000 applicants to attend Camp Tazo – who traveled to Marble Falls from all over the country. The camp provided a hurrah of activities; from canoeing to line dancing, hiking, karaoke, and yes, even a talent show – which Edwards described as one of the most incredible shindigs she’s ever been a part of. But what would camp be without music by the fire? Edwards confirmed she led the group in a not-so-typical campfire sing-along, complete with a grand piano. “It was such a feeling. … There was an ambience in the air,” Edwards says. “Evident not all of us were singers, but it was fun!” Edwards, who was charged with selecting the campers from their submission videos, explains that the chosen ones stood out in some way, including camper Trish Ives. Later dubbed “mom” by her Camp Tazo cohorts, Ives – a grandma and Navy veteran – was the oldest camper at the lake. Edwards, relaying a conversation from camp, says Ives sometimes had to push herself to keep up with activities, but succeeded in breaking her out of her comfort zone. Ives, who discovered she can still walk in a pair of pumps, left Austin with some newly instilled confidence.

But Ives wasn’t the only character who left her mark on the drag queen. Edwards also recalled Alex Campos, a YouTube vlogger and body-positivity influencer who helped empower others, and Navil Barahona, mom of a newborn and caretaker of a mother battling cancer. But despite their unique backgrounds, one central goal brought them together: They were each seeking an opportunity to step away from their comfort zones, but didn’t know how.

That, however, was Edwards’ goal. Leaning on her personal experience, the Drag Race star helped others find their unexpected voices – and she accomplished what she had hoped for, making the final day of camp bittersweet. In the process of packing up, Edwards sat down and shared personal conversations with the campers as they said their goodbyes. “That honestly was very special because there are people who maybe looked up to me from being on television and got to chat with me,” Edwards says. This, she says, is how 30 people from the LGBTQ community and allies arrived at Camp Tazo as strangers and left as family. “This experience was groundbreaking,” says Edwards. “It will hold near and dear to my heart.”

And if reading this feels bittersweet because you missed the chance to camp with Edwards, a Tazo Tea rep has confirmed to Qmmunity that there will be another camp weekend in 2020. Details to come. 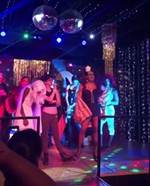 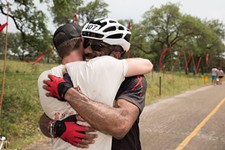