It’s official, Erica Nix’s Transform Fitness will hold its final class, Big Boy Yoga, on Saturday, before shuttering for good. But there’s no use crying over closed queer spaces – or, at any rate – Nix doesn’t want your tears. Excited is the word she uses when asked about starting the next chapter in her career as a personal trainer. 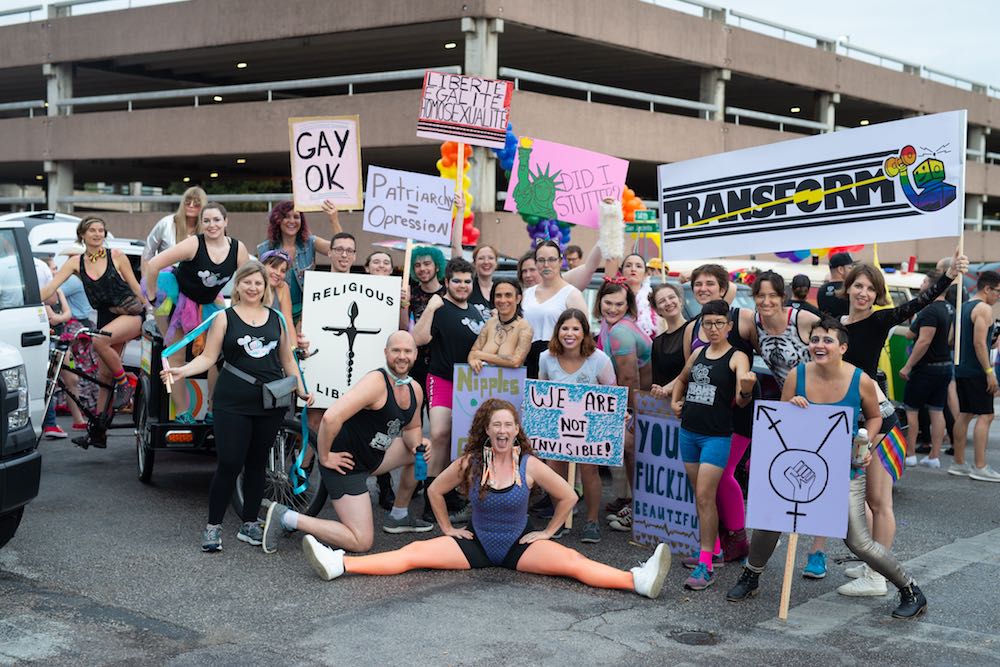 Known as Austin’s queer gym, Nix opened Transform several years ago after Center Spot – where she led queer workout classes – closed. Nix says she essentially opened Transform out of a “desire to make community space” when there wasn’t one. A goal she achieved. Within the walls of 1909 Wheless, Nix’s Class Transitions, designed to help trans and nonbinary people learn healthy ways to workout while building qmmunity, bloomed. “It’s really strong right now,” Nix says of the class. “As a trainer, your goal is to get people who don’t feel comfortable in any gym to feel comfortable working out anywhere.”

But that doesn’t mean she’s throwing in the towel – no pun intended – though Nix is excited to not have to wash anymore gym towels. Nix tells Qmmunity that Class Transitions has officially found a new home at the YMCA, where it will be held every Thursday at 7:30pm in a private room. The gym also offers two family restrooms and a gender neutral hot tub and sauna. “Maybe we’ll all sit in the hot tub after class,” she laughs.

In all seriousness, Nix points to the YMCA’s affordability, which she believes will make it easier to reach more people. Though clearly (and rightly) proud of her work at Transform, Nix also admits she struggled to make the classes as “as inclusive as I wanted them to be … But when you have to build a class based around keeping the doors open, you have to focus on the people who keep coming back. You can’t experiment with trying to attract new people.” Her goals for future classes – her other branded class Workout! With Erica Nix is moving to Myo Massage in the Triangle – is to reach more queers of color and folks with different mobility. In fact, it’s another thing she’s excited about.

“Now that I don’t have to worry about washing towels or whether or not I have enough cups, I’m hoping to have more free space to try out new things.” Though Nix originally thought Transform would be a “starter place” with queers and workout classes “bursting at the seams,” she confesses: “maybe I don’t have a mind for management.” What she does have a mind for, however, is queer space creation. Before Center Spot, Nix led her Richard Simmons and Jane Fonda-inspired workouts at Cheer Up Charlies, the upstairs space of Royal Blue Grocery, and Galaxy Dance Studio. Now she hopes to pick up where she left off, noting that she hopes to go back to Cheer Up Charlies and that she’d “love” to host a workout class at Bout Time II – “they’re so fun!” But ultimately, queers (and allies) looking to elevate their heart rate and let off some steam should expect to find Nix leading workouts in “places you don’t expect them to be. I’m excited to be bringing back the absurdity of it,” she sums up.

Nix concludes, this is a positive next step for her and her followers, but adds “It’s so hard – part of me wants to say support queer-owned businesses, but I know it’s hard … I’m excited to continue what I love and put some energy back into my own self care.” She credits Myo and the YMCA – both of which, she notes, have supportive LGBTQ staff – for helping smooth out the transitional kinks. “This could be a really sad time, but they’ve welcomed me with open arms. I’ve really felt supported.” With that support, Nix guarantees, you won't just see more of her workout popups, but also more creative work, which she often had to turn down in favor of running Transform. So more performance art, videos, and her other creative adventures will likely be before us sooner than we realize.

After her final Workout! With Erica Nix class at Transform on Friday (March 29) at 6:10pm, fans and newbies – all are welcome! – can find Workout! At Myo Massage (4616 Triangle Ave.) where Nix will also lead her personal training as well. Class Transitions will soon call the YMCA home every Thursday at 7:30pm, though the start date has not yet been set. And, last but not least, Splash Dance, her water aerobics class at Austin Motel, will also return this summer.