SXSW Panel: Going Beyond the Gender Binary in the Workplace

A gender "tsunami" is coming: Will your business be ready? 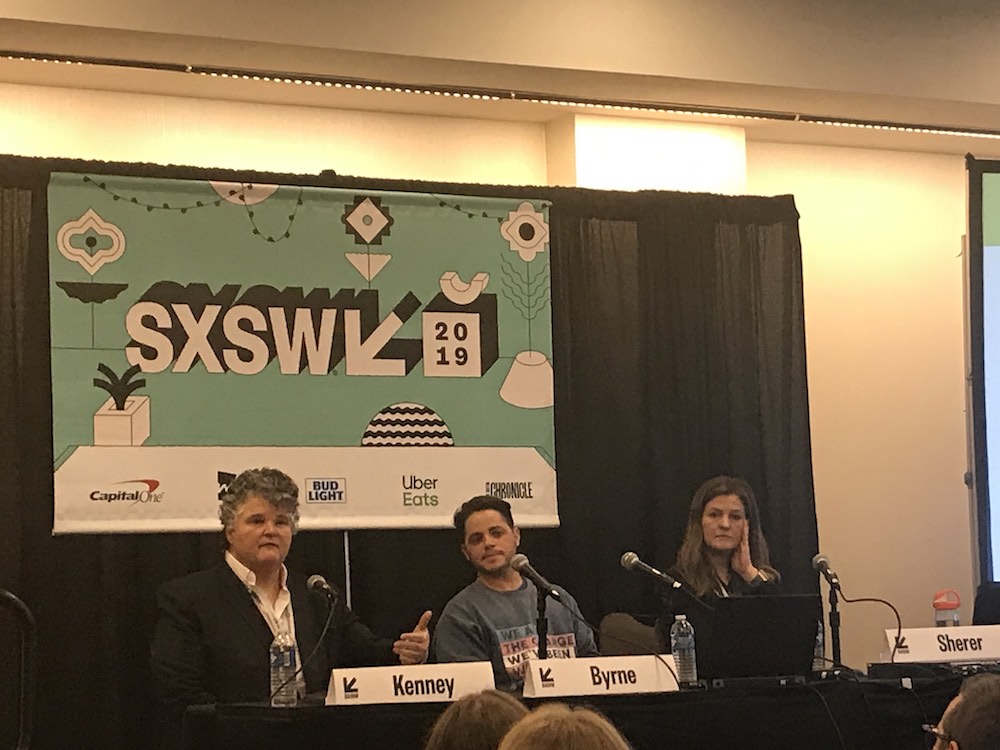 “I’m sitting there thinking, ‘What do I do?’” said Byrne, who automatically wrote off the therapist. “To say I was treading water [at the time] would be generous – I’d reached out, asked for help and support, and instead this care provider is asking me to use my spoons to educate them.”

Byrne, along with co-panelists Lisa Kenney of Gender Spectrum – an organization working to create a gender-inclusive world for all children and youth – and Rebecca Sherer of Google impressed upon audience members the need for cisgender folks and people in places of privilege to educate themselves on the world outside mainstream culture’s male and female gender binary. While they jokingly referred to the panel as 101 on gender, complete with the business benefits of embracing and understanding those who live beyond or outside the binary, I’d wager all cis folks, present writer included, could use a 101, or a refresher course.

Gender in the workplace, said Kenney, is equated with women. And the #MeToo movement to end sexual harassment in the office, has had the unfortunate side effect of doubling down on the binary – demanding “50/50 equality,” when in fact, 12% of millennials identify as transgender or gender nonconforming, according to a recent GLAAD poll. Millennials, Kenney said, are making a really important shift in how gender – from intersex, to nongender and agender, to transgender, gender fluid, gender nonbinary, etc. – is defined, but millennials aren’t moving fast enough for the younger generation. When it comes to gender diversity, “Gen Z thinks millennials are quaint,” said Kenney. “And they’re incredibly intolerant that people aren’t getting it.”

With Gen Z growing up, the panelists agree: A “tsunami of change” is coming in regards to breaking down the binary, and businesses can either get prepared or lose out.

Kenney, relaying a time Skype required Kenney’s gender – male or female, pick one – to set up a conference call, asked: “From a product development standpoint, why turn off a customer that quickly?” And added, “If you’re going to ask, then you better do your ‘homework.’” To attendees, Kenney gave a to-do list: 1) Understand your own gender story, because “we all operate from there;” 2) Utilize a gender lens for a few days and observe the many odd and unnecessary gender stereotypes in action; 3) Create a sense of gender literacy in your place of employment.

The issue, said Sherer, isn’t just about basic human rights. “That could be a compelling argument for some of you, but if not, I’m here.” As a senior director at Google, and a mother of trans kid, Sherer expanded on the idea that going beyond the binary – and removing gender roles in general – is good for business. Focusing on two factors, productivity and innovation, Sherer made the easy connection: When people aren’t agonizing over how their gender is perceived by coworkers or worried they’ll be misgendered, it’s a “game changer for productivity.” Meanwhile, innovation comes when we challenge ingrained beliefs often mistaken for “immutable laws.”

“I’d be lying if I said it’s super easy,” admitted Sherer, who’s worked with numerous organizations dedicated to moving beyond just male and female. (“We’re not trying to eradicate gender,” added Kenney, “we’re trying to create a world where the gender we have is being respected.”) Regardless, said Sherer, “It’s really easy to start. People are asking for basic human respect.” Sherer urged folks to read up, speak up, and role model the “right behaviors,” emphasizing the importance of getting pronouns correct, and getting comfortable with getting corrected. Closing, she added: “I don’t care why you do it, I just want you to start doing it.” We couldn’t agree more.

Going Beyond the Gender Binary in the Workplace