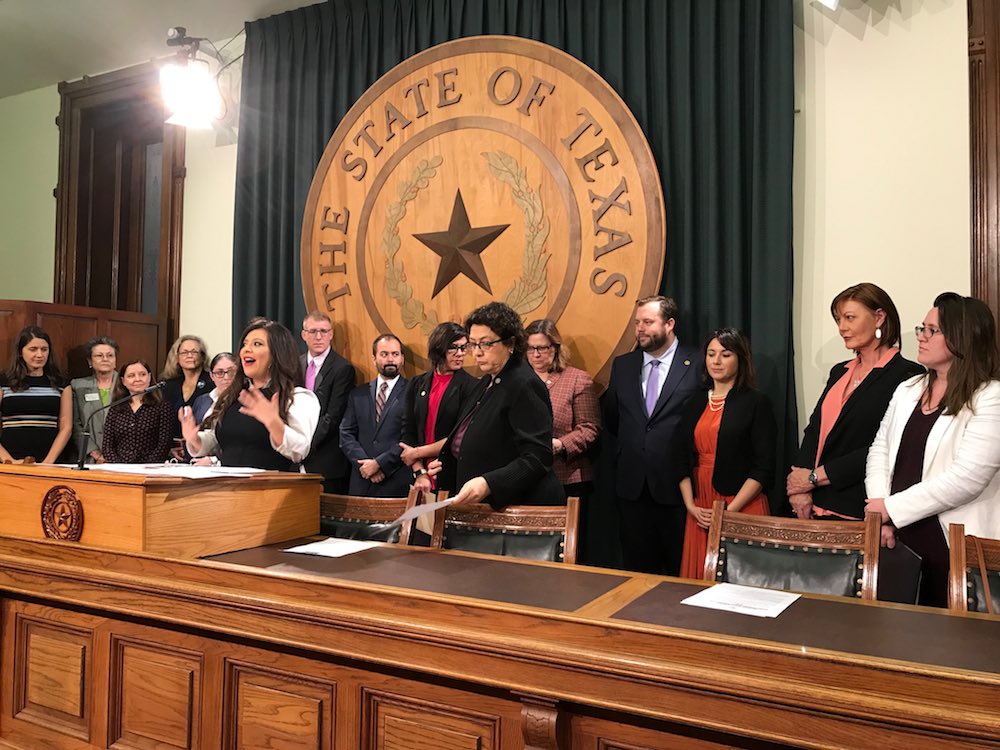 The Caucus’ four leading issues, as briefly highlighted by four of the five founding members, include reworking the criminal justice system to better support the LGBTQ folks intangled within it, as well as ending conversion therapy, and making both employment and housing discrimination illegal. Vice Chair of the Caucus and freshmen Rep. Jessica González of Dallas spoke on the issue of criminal justice, citing the state’s recent spike in hate crimes and anti-LGBTQ violence, the “skyrocketing” rates of transgender folks being killed, as well as homelessness, addiction, and imprisonment within the queer community. The Caucus intends to focus on the “unique ways” in which the LGBTQ community is affected by the Criminal Justice System from “who’s arrested to who’s convicted,” as well as prison conditions, post-release services, explained González. “LGBTQ Texans face discrimination at every turn, and that’s not justice at all,” said González. “We still have a lot of work to do and that is why this Caucus exists.”

Chair Mary González (D-El Paso) kicked off the conference, calling the act a historic moment in time. Formed by the House’s five LGBTQ representatives González, Celia Israel (D-Austin), Jessica González, Julie Johnson (D-Carroll­ton), and Erin Zwiener (D-Driftwood), the LGBTQ Caucus is the first ever body of lawmakers to represent queer rights at the Texas Capitol. Several of the founding members paid homage to Glen Maxey, Texas’ first openly gay legislator who served in the House from 1991-2003. Israel, who discussed pulling the plug on conversion therapy for queer youth, said the formation of the Caucus caused her to reflect on her friendship with Maxey.

“For him to be the first person to cut the water, so to speak, and all of us to be doing what we’re doing, I know it’s an honor to him. He kind of gave birth to a bunch of us, so thank you Representative Maxey.” Israel also acknowledged that a “nine-year-old version of myself might be watching” the press conference, and “I want her to know … it’s ok to be gay.” Israel filed House Bill 517 in December, which would deem conversion therapy as “unprofessional behavior” if committed by a licensed mental health provider making them subject to disciplinary action by the state. “It’s unconscionable that in this day and age their are individuals who present themselves as mental health care professionals and are making money off of families to suggest their children are less than and that children should be fixed,” Israel said.

Sam Smoot, the interim executive director of Equality Texas – a statewide political advocacy organization for LGBTQ rights – closed out the press conference by applauding the Caucus for leading the “proactive push for equality.” She said too that the Caucus has already sent two clear messages: to LGBTQ youth and adults, Smoot said it shows “that you matter, you are represented, you have a voice.” And to anti-LGBTQ politicans who would pursecute and marginalize queers communities, the Caucus sends a message just by existing. “And that message is: You will no longer succeed in dehumanizing our community for your political gain. It’s over.”