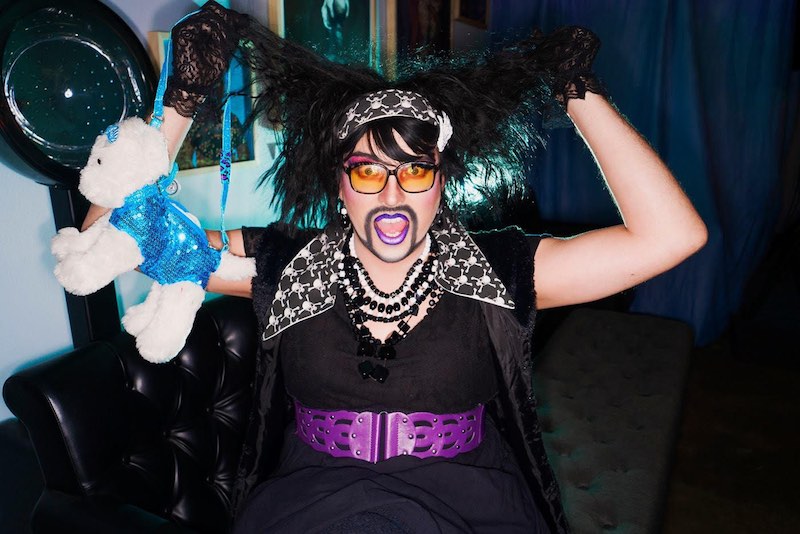 Zapalowski writes, “My partners and I started Hive Mind Hair Company as a place to collectively bring together the talents of each and create a space that would be a hair salon by day and a community space for the local artists and performance community in the evening." Zapalowski, who's been doing hair for 13 years and performing drag for three, tells us Hive Mind was a place for them to bring all their talents together. "I tried to really focus on putting together events to bring the arts and performances (drag, comedy, live music, etc.) to the Cherrywood area," Zapalowski continues. One of the hybrid venture's biggest goals was to create all ages events to better serve the under-21 crowd.

But in the last six months, according to Zapalowski's email, "my partners and I have come to the conclusion that I should exit the business because of 'creative differences.’” Zapalowski confirms he is no longer a co-owner nor hairstylist at Hive Mind and said the business has since decided to put a stop to the entertainment portion. Hive Mind Hair Co. will continue to operate as “just a salon.” In an emailed statement to Qmmunity, Hive Mind co-owners Korin Spring and Michelle Farrow said the appropriate licenses and insurance were never acquired for the evening events, which they ultimately found "to be detrimental to the business." They explained, "We had appropriate licensing and insurance for salon operations only. We all came to the conclusion it would be best to part ways." Since Hive Mind’s opening, the venue has hosted countless events for the local drag and queer performance communities, including Mary Jane Style’s wILD 2.0 showcase, Zapalowski’s popular monthly drag extravaganza, toyBOX (co-hosted with Papi Churro), and shows by Austin’s glam-goth boy Caleb De Casper. “For performers and the LGBTQ community alike,” says Zapalowski, Hive Mind "was a space where everyone could feel comfortable, included, and create their own atmosphere. … And it was all DIY,” an increasingly rare type of venue in Austin. "Each person putting on a show had the chance to create something new ... And that was special.”

Last Friday, Jan. 25, witnessed the last drag performance at Hive Mind with Austin International Drag Foundation benefit Drag Days. Jamie Steward Bancroft, president and CEO of Austin International Drag Foundation – which puts on the annual fest – echoes Zapalowski’s sentiment: Hive Mind was important as an under-21 venue. In a comment to Qmmunity, Bancroft said the venue had “been very supportive to the drag community, giving our brothers and sisters a safe and welcoming space to perform their art outside of a bar/nightclub environment." This, Bancroft writes, allowed performers a space to "show their art to a wider range of audiences including those patrons under the age of 21 and people who do not like to hang out in bars.”

For now, Zapalowski says he's “been talking with Carousel Lounge, Hops & Heroes, and other places” to help find a new home for the shows started at Hive Mind. Though Zapalowski “can’t really spill the beans just yet” on if he will be taking his concept of a salon-meets-DIY-venue elsewhere, he confirmed a friend is working on bringing “his [the friend's] vision of the concept to life.” Zapalowski explains, “Hopefully within the next six months we’ll be able to see the results of that collaboration.”

Between now and then, Zapalowski confirms he'll be working at another salon and continuing to create events around town that help "bring more inclusion into our community.” To the performers, fans, and qmmunity members who found a home at Hive Mind, Zapalowski assures, “I truly appreciate all the love and support that I’ve seen from this community over the last six months. … Bigger, better things are on the horizon.”

Local Leaders Unveil the Latest Strategy to End Homelessness
"No plan" no more?