Latin-infused songstress on her new sound and new marriage

There’s a lot of work that comes with planning a wedding: securing caterers, finalizing floral arrangements, and herding extended families. For musician Gina Chavez, add one more item to the prenuptial to-do list: coordinating the wedding cinematographer so that you can use clips in a music video.

“Selfishly, I think I wanted a way for us to experience the wedding without having to go watch hours of wedding footage,” laughs Chavez, who featured the footage in her music video for “Heaven Knows,” a track on this month’s new EP Lightbeam and directed by close friend and featured aGLIFF director Lisa Donato. All jokes aside, Chavez has been at the forefront of Austin’s Latin folk scene for over a decade, garnering ten Austin Music Awards and a NPR “Tiny Desk” concert along the way. But it wasn’t until Lightbeam that Chavez decided to explore a more intimate topic: her marriage to Jodi Granado.

“We’ve had an incredible life together, really,” insists Chavez, who relays they’ve been together for 12 years after meeting at the University Catholic Center at UT-Austin. “We’ve been through what it’s like to hide your relationship...what it’s like to figure out how to not hide your relationship as Catholic Latinas in Texas.” For the self-proclaimed open book, it was only a matter of time until she wrote a record full of love songs. “To have to either hide my relationship or figure out ways to talk about it and people don’t, you know, ask questions or look at you funny – it’s just not my strong suit. I fell in love with this amazing woman, and I’ve always wanted to shout that from the rooftops.” 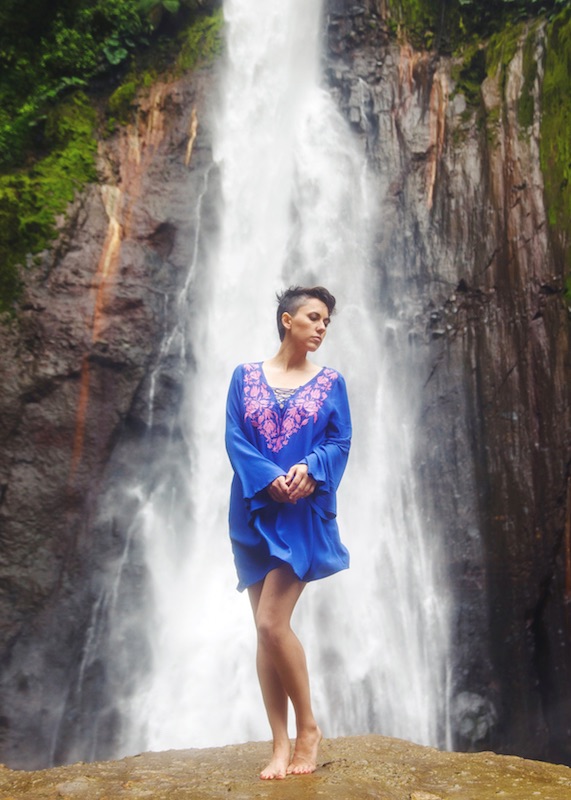 Stylistically, Lightbeam marks a departure for Chavez’s signature Latin-infused, bilingual sound; the new EP steers closer to R&B and features all-English songs, a first. For the punchy, highly danceable “Let It Out,” Chavez says the tune was born out of a guitar riff created in an online Berklee College of Music class and her time performing abroad as a cultural ambassador for the U.S. State Department, an international affair that sometimes took her to countries like Saudi Arabia, where being queer was still considered a crime.

That show in particular was memorable. She recalls: “Young women were able to take off their abayas ‘cause we [were] at the U.S. embassy … And then there was this cohort of young, very flamboyant gay men and I was just not expecting that because it’s literally illegal, like they can stone you to death for being gay.”

If Chavez had to sum up the outdoor show in one word, it would be “amazing.” She remembers it raining as audience members danced. “It was not what I was expecting, but at the same time I realized the young people of the world – and everybody of the world, but especially young people – we just want to be ourselves, no matter where we are.”

The state of young people across the world is a matter near and dear to Chavez’s and her wife’s hearts – Lightbeam’s release party doubles as the seventh annual benefit concert for their philanthropic project Niñas Arriba, which helps young women attend college and find paid internships in El Salvador. “This is kind of the big graduation ceremony,” says Chavez. “We’re now seeing all four young women who we’ve been supporting graduate from college.” She extols, “The Austin community has seen these young women through, and we’re really proud of [them]. As much as we might have given them the opportunity, they had to take it and run with it, and they had to be on the ground doing the hard work and making it happen. ... They figured it out on their own and we’re just really proud of them.”

Catch Gina Chavez along with Carrie Rodriguez and Jane Ellen Bryant on Saturday, Sept. 15 at Antone’s, 305 E. 5th. Tickets $17-50. Copies of Lightbeam are available at Waterloo Records on Friday, Sept. 14 and at the show, but won’t be available online in full until mid-October.

Local Leaders Unveil the Latest Strategy to End Homelessness
"No plan" no more?