Your Queer Guide to Austin

A crash course on the city's LGBTQ parties, prides, and resources

Austin is a city known for many things: bats, music, “weirdness,” liberals. It’s also home to a thriving and jiving queer community – qmmunity if you will. But like many a city, Austin’s queer side is sometimes elusive – where do you go? What do you see? Who’s in the know? 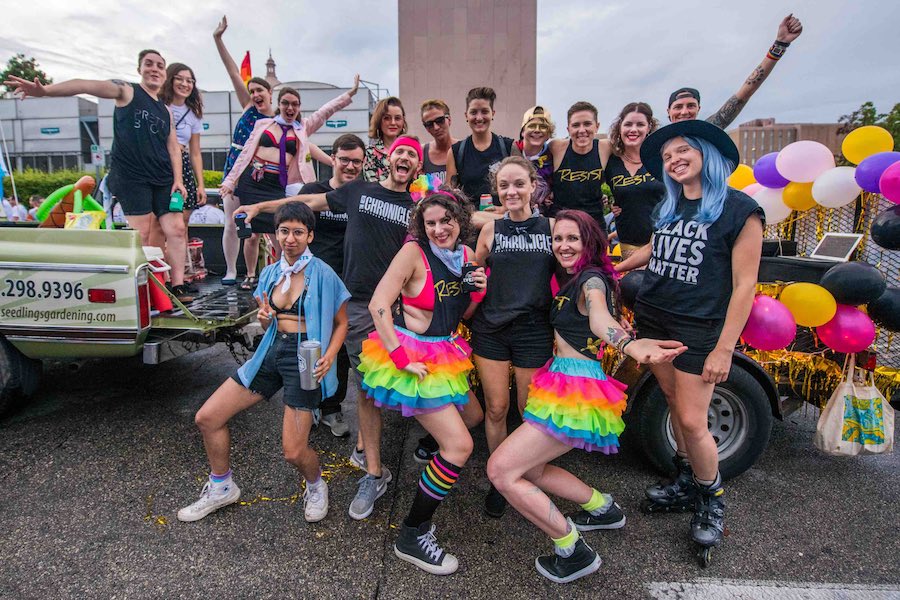 We’re in the know. Whether you're here for a weekend or settling in to call it home – hell, even if you’ve lived here for years – we’ve got you covered. In fact, we've had Austin covered since 2004, when the Chronicle began running a dedicated LGBTQ column and listings. The blog came a few years later, and ever since then, we've been documenting queer parties, the rise and fall of gay bars, new festivals, and community members doing awe-inspiring work. In a nutshell, we're in love with the many facets of Austin's queer scene(s) and we're here to help you find your space in this place.

But before diving in, there's a few things readers should know. For starters, Austin doesn’t house a lesbian bar – the last one closed in 2013 – but that doesn’t mean there’s a shortage of spaces for queer women. Second, unlike most major cities, there is no “gayborhood,” but we do have Fourth Street, which is home to a handful of gay bars. And while we lack an LGBTQ community center, you’ll find sober spaces and youth spaces along with QTPOC, trans, HIV-support, and LGBTQ resources within city limits. While this list certainly won’t cover everything – how could it? – these major players will serve as an introduction to the greater qmmunity.

Cheer Up Charlies: While not exclusively queer, CUC is a queer-owned bar and music venue that hosts a plethora of queer-of-center dance parties and events, including Greetings from Queer Mountain – one of Austin’s oldest storytelling events with a v queer twist.

Rain on 4th: But we just call it Rain. It’s also part of the “Strip.” Steer here for dancing, TV watch parties, trivia, and college nights – if you wanna take it to the gay bar.

Sellers Underground: The new kid on the block, Sellers may be the most recent addition to the Fourth Street scene, but sure fits in just fine. Cocktails, comedy, and home to Lesbutante & the Boss’ Ladies Night, among other things.

Highland Lounge: Cross the street to find this three-story club complete with underwater vibes and a basement “dungeon” that plays home to Final Fridays, a party by Package Menswear (they carry all the short shorts, and tighty whities in ever color of the rainbow for MOC needs).

The Iron Bear: Austin’s one and only bear bar, but these guys make everyone feel right at home. Located just four blocks north of Fourth. They’ve got karaoke, underwear parties, gear nights, and more.

Bout Time II: Off the beaten path, this bar and dance club is complete with loads of outdoor space including a sand volleyball court. It’s been described as the “most genuine” gay bar in Austin. All are welcome.

TGQ Social: A monthly community meetup (at Butterfly Bar) for trans, genderqueer, and nonbinary folks – and their allies.

Lesbutante and the Boss: These two ladies hosts a slew of lesbian-leaning events from dance parties to happy hours and even gay field days, but they’re but they’re most well-known for their Second Saturday’s Ladies Night.

Guerrilla Queer Bar: A roaming, mostly queer and trans takeover of local straight bars. (Full disclaimer: Qmmunity editor Sarah Marloff is one half of the GQB crew with Ezra Edwards a.k.a. DJ GirlFriend.) Each takeover, the team raises cash or collects donations for Austin nonprofits.

Austin Black Pride: Three days of events including ABP’s annual boat party. The org formed in 2016 and threw the first Black Pride Fest in March, but they’ve since moved it to June in keeping with the whole Pride Season. Catch ABP doing stuff year-round too.

QueerBomb: Austin’s DIY, non-corporate, alt-Pride falls on the first Saturday in June with a rally and glittery march down Dirty Sixth – aptly described as the straightest street in town – followed by a dance party to round out the festivities.

Austin Pride: Our flagship Pride celebration is the biggest one in Central Texas, marked by a festival and parade typically held in August. Its span of events grows longer and more inclusive by the year, too!

aGLIFF: Also known as the All Genders, Lifestyles and Identities Film Festival, aGLIFF is one of the oldest LGBTQ film festivals around. Every fall (when it’s still 90 degrees), the fest offers the city’s queer film lovers, cinephiles, and out-of-towners a reason to escape the heat.

Austin International Drag Fest: For several days in November, Austin becomes the literal drag capital of the world thanks to this festival. Queens, kings, and gender-bending performers from all over the globe sashay into town to share their art and lewks with fans.

OUTsider Festival: A “transmedia” festival that showcases queer outsider art. Expect to be wowed by provocative performers, out-of-the-box work, and jaw-dropping visuals. The weekend-long fest and conference unites queer artists, audiences, and scholars from across the world to make magic.

Gender Unbound Festival: Created by Gender Portraits' artist Drew Riley, this two-day multidisciplinary art festival shines the spotlight front and center on trans and intersex artists and spans everything from visual to musical creations. The party goes down late September.

Splash Days: Austin's annual summer send-off every Labor Day weekend features nonstop gay parties to get you wet, wild, and feeling good. Plus, funds raised go back to the community.

Out Youth: A nonprofit for LGBTQ kids with drop-in hours, counseling, and an annual queer prom.

UT Name and Gender Marker Clinic: A pro-bono clinic that helps folks change their name and gender-marker on basic forms of ID.

Transgender Education Network of Texas: A wonderful resource for trans and nonbinary folks seeking support or information. Also a great resource on how to best support the trans community.

AIDS Services of Austin: Wraparound services for folks living with HIV as well as prevention services and STI testing. And, as of September 2018, they’re now home to a full-service medical clinic as well.

ASHwell (Austin Sexual Health & Wellness): Formerly known as the Wright House Wellness Center, but when it added a sexual health clinic in the summer of 2018, the org rebranded. Now providing STI/HIV testing and treatment as well as access to PrEP and PEP and Hormone Replacement Therapy, ASHwell aims to be a safe space for the qmmunity at large.

The Q: A sober social space for queers to gather. And, as part of AIDS Services of Austin, they do safer sex outreach with a focus on supporting young gay men.

LGBT Coalition on Aging: A group of folks looking to make sure Austin’s LGBTQ seniors are cared for by the qmmunity and the city.

LGBT Elders Task Force: This community group has its eyes on the prize: to become a functioning and thriving SAGE affiliate to serve and advocate for Austin’s aging LGBTQ community.

Austin LGBT(Q) Chamber of Commerce: A great resource for queer- (and allied-) owned businesses, the Chamber not only offers networking opportunities, but also acts as an advocate for the community and offers educational opportunities.

Council Member Jimmy Flannigan, District 6: Flannigan, elected to City Council in November 2016, is the first openly gay man to serve on the dais. He and his (v queer) staff are always there to lend an ear or hand to the qmmunity.

Austin History Center: Aside from being a general gem filled with bizarre and awesome mementos, the Center also houses an archive on Austin’s queer history.

Want to know more about queer life in the ATX? Bookmark the Austin Chronicle’s Qmmunity for Austin’s queerest news and events.