This weekend’s ATX Television Festival offered numerous conversations on the changing atmosphere within the TV industry, and how marginalized voices are being represented onscreen. However, one loudmouthed disruptor tried – and failed – to derail the debate. 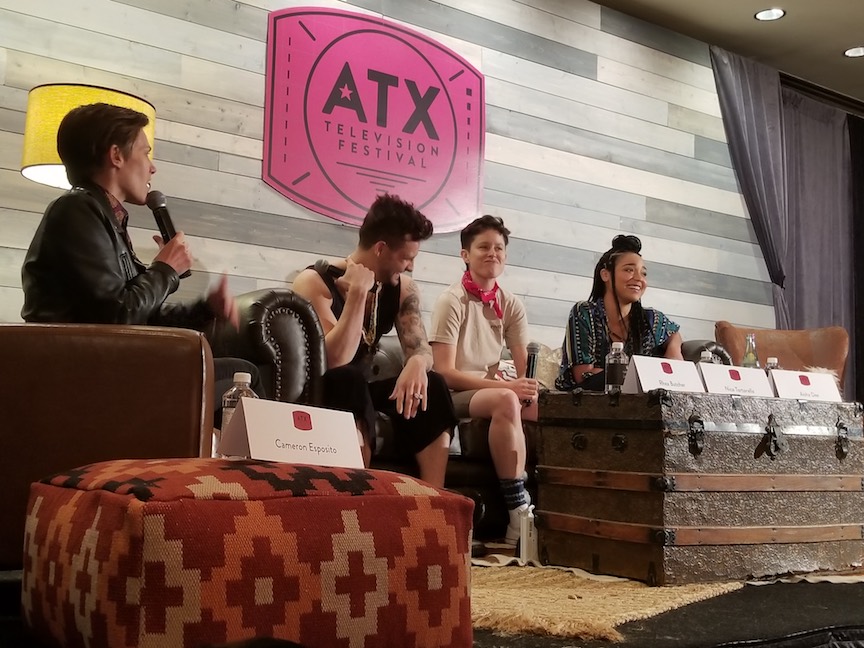 The “Breaking Down the Binary” panelists – including stars and creators of Take My Wife Cameron Esposito and Rhea Butcher, Younger's Nico Tortorella, and Aisha Dee of The Bold Type – and attendees got more than they bargained for thanks to the hateful intruder.

What began as a lighthearted conversation in what was assumed to be a safe space quickly devolved at the interruptions of one attendee. Dressed in a homemade robot costume, the person continued to interrupt the conversation with “binary” commentary and robot sounds. Eventually, panelists were unable to tolerate the disruption, but the situation reached a breaking point when the “robot” moved toward the stage before being intercepted by festival staff.

Tortorella then requested the disrupter leave so the panel could continue, at which point the “robot” spewed an onslaught of queerphobic slurs and hateful rhetoric directed at panelists and audience members alike.

Festival staff attempted to remove the person, but he refused to budge. Hotel security, who were not currently present at the panel, were called to physically escort him out. Festival founder and co-executive director Emily Gipson apologized to the panelists and audience for what had occurred. Gipson reassured attendees that this individual did not represent the festival – on the contrary, she said, ATX TV Fest values LGBTQ panels and discussions. But some feel that it was too little too late.

The panel continued with a great deal of insightful and engaging conversation about visibility, inclusion, and the normalization of identity diversity in entertainment. It's entirely unfortunate that such an important conversation was forced to be cut short due to the calculated, hateful actions of one person.

Though many believed this was an isolated incident, more details have begun to emerge that this has, in fact, happened before. A 2018 South by Southwest panel on LGBTQ and nonbinary issues was interrupted by the same character. The origins: A right-wing podcaster based out of Dallas who sends out his minions – er, intern – to intentionally disrupt and delay queer presentations at festivals and conventions.

The repeat event begs for a conversation of responsibility: What needs to be done in order to prevent this situation from unfolding again? The inclusion of these important discussions and events also comes with the responsibility of protecting those present, should something like this, or worse, arise.

ATX TV Festival has an outstanding code of conduct for all festival attendees to adhere to. While that stands as an important first step, the conversation, not exclusive to this festival alone, is still to be had about what systems need to be implemented when much of present-day society still views LGBTQ voices and representation as something controversial.

In speaking about the incident, panelist Tortorella said he believes “everything happens for a reason,” this outburst included. For him, the silver lining is how this conversation will continue to resonate among festivalgoers regarding what we can do to make spaces for marginalized voices safer, more accessible, and supported both on the screen and off.