A celebration and exploration of a gender-fluid transgender woman’s life, Transformer, is coming to the Alamo Drafthouse on April 10 as a part of the Austin Film Festival’s Audience Award Winner Series, in partnership with aGLIFF. 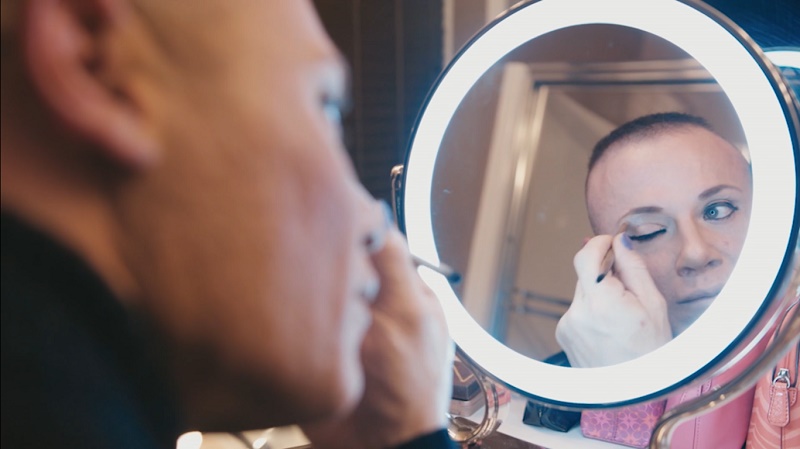 Janae Marie Kroczaleski putting on her makeup in the documentary Transformer

Transformer follows former Marine and world record-setting powerlifter Janae Marie Kroczaleski. While she had been out to many of her friends and family for years, Kroczaleski had not planned on going public with her identity until after her three teenage sons had graduated from high school, for fear of how the school and their friends might treat them. But the decision was taken out of her hands in late July of 2015 when a YouTube vlogger publicly outed her.

The story immediately blew up, and Kroczaleski found herself awash in criticism, support, and reporters. It was during this time that documentarian Michael del Monte, who had been interested in the powerlifting and bodybuilding community, was introduced to the story, and found himself intrigued. “For me it was a combination of the muscle and the transgender [aspects], because it obviously posed a huge dilemma,” del Monte said. “How is this person going to view themselves?”

“I thought I had to give up being big and strong in order to be a woman, and in order to transition.”
The award-winning documentary focuses on Kroczaleski in the wake of her outing, the losses she faced in her career, her newest and most serious effort to transition, and her evolving relationships not only with the people in her life, but with herself. She said, “Because of me being this alpha male, being big and muscular, and also being transgender, it’s easy to try and flip this into some kind of freak show. I had a couple places that tried to sensationalize the story [and] that’s what I was most concerned about.”

Having agreed with Kroczaleski on a vision for the documentary before filming started, del Monte was careful not to approach the story from the sensationalist angle. “Janae is such an amazing character … I didn’t want anyone telling her story but her.”

And this attitude is reflected throughout the documentary. Kroczaleski and the discussions she has with both friends and the camera are frank and unflinching. She says that powerlifting in many ways prepared her for coming out and doing a documentary. She is used to speaking to journalists, being filmed, and speaking in front of large crowds. She admitted that at times she even had to remind herself that she was wearing a microphone and being filmed. 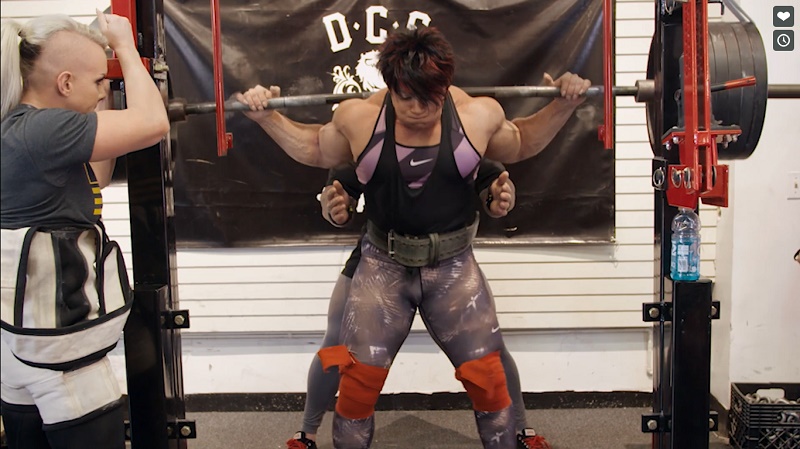 Powerlifter Kroczaleski in the gym

Her relationship with her muscle mass, however, is much more complicated. She struggles between wanting to lose much of it to fit into society’s rigid standards for what a woman should be, and not wanting to give up something she worked hard for and genuinely cares about. “I thought I had to give up being big and strong in order to be a woman, and in order to transition,” she said. “And that was something that tormented me for so long.”

But whether it be facing cancer, breaking world records, undergoing surgery, or walking around in platform heels, Kroczaleski proves over and over again to be up for anything the world throws at her. She just hopes that in doing the documentary, people both in and outside of the trans community can find strength through her story. “I’m hoping with me not being your typical transgender story, where I come from this alpha male background, that it’ll reach a segment of the population who would normally have no interest in a transgender film."

For del Monte, coming originally to this project from an interest in bodybuilding, the premiere at AFF was his proudest moment in this journey, but also a fraught one. Given that he wasn’t as familiar with the queer community before doing this story, and Austin had a high number of LGBTQ attendees, he wasn’t sure how it might be received. But, he says, after the film was over, “People were standing up, and clapping, and they were crying, and I remember one girl stood up and said, ‘Janae, I struggled with this my whole life and you just inspired me.’”