A gaggle of queers are about to descend on the Capitol. A year after bringing their dance party protest to Gov. Greg Abbott’s mansion – in response to hate-filled legislation, such as the duplicitous bathroom bill(s) – the organizers behind Queer Dance Freakout are taking the fight and the glitter to the Texas Capitol Saturday evening. 2017: Getting that dance party started (Photo by Jana Birchum)

Unless you’ve spent the past year hiding under the covers with your cat (we’d understand after the year we’ve had) you’ll recognize Ezra Edwards, Jeremy Von Stilb, Erica Nix, and Becca Hyatt from their numerous contributions to Austin’s queer drag/nightlife/workout scene. (In fact, last year’s Freakout won a much-deserved Best of Austin from the Chronicle.) But for Saturday and the coming elections, they’ve set their sights on something bigger: Ted Cruz’s seat in the U.S. Senate.

In response to “why Cruz?” Hyatt says it’s time to “mobilize” the queer community to help remove him from office. The Texas-based politician has “consistently opposed equality for LGBTQ Texans and Americans. He has opposed both local ordinances that would have protected LGBTQ people in local cities as well as ENDA's [a.k.a. the Employment Non-Discrimination Act] explicit federal workplace protections...he led the charge to deny Texas couples marriage equality,” – the list goes on.

In between ass-shaking and protesting, Hyatt says people will be able to register to vote (for the November election) and learn more about the March 6 primaries (early voting is happening now wherever you see Vote Here signs). Everyone agrees, these midterms are important, and we’ve always said, don’t mess with the queers – it’s a battle you’re sure to lose. So let’s hope this is a warning to Cruz and rallying cry for queers. Get out there and vote! See our Elections page for all you need to know.

By now, you’re fired up and ready to dance for a better Senator who will stand up to Trump not support him (all eyes on Beto O’Rourke). It’s time to get to sign making and outfit planning. After all, queer fashion is a form of resistance. Hyatt, who’s notorious for her on-point protest signs and witty “Roses are Red” poems, offered up some slogan suggestions and all around ideas. 1. Write whatever you want! While it’s a queer protest, allies are very much welcome and signs don’t have to be queer-specific.

2. Go there. “My favorite protest signs are bold, colorful, funny, current, and controversial,” says Hyatt (we agree). Some of her faves from last year? "I LOVE THIS GAY BAR," "Prolapse Abbott & Prolapse Trump," and "The Future is Femme."

3. Keep in mind, you want your signs readable and legible. “Bold, clear lettering is great so others can easily read your message.” She also reminds y’all, “these [tend to be] heavily photographed events, so while I'm all about the more radical the better, take into consideration that a pic of yourself with your sign could end up on a media outlet.” (Like ours.)

4. Don't overthink it. Hyatt says, “The most important part is that you're communicating a message that's important to you – or that you just think is relevant and funny as hell.”

6. Lastly, the creativity lives beyond the sign. “We encourage anyone [and everyone] to turn a look,” says Hyatt. Get weird, get freaky, get sexy, get leathered up, laced up, facepaint it – just as long as you do you. 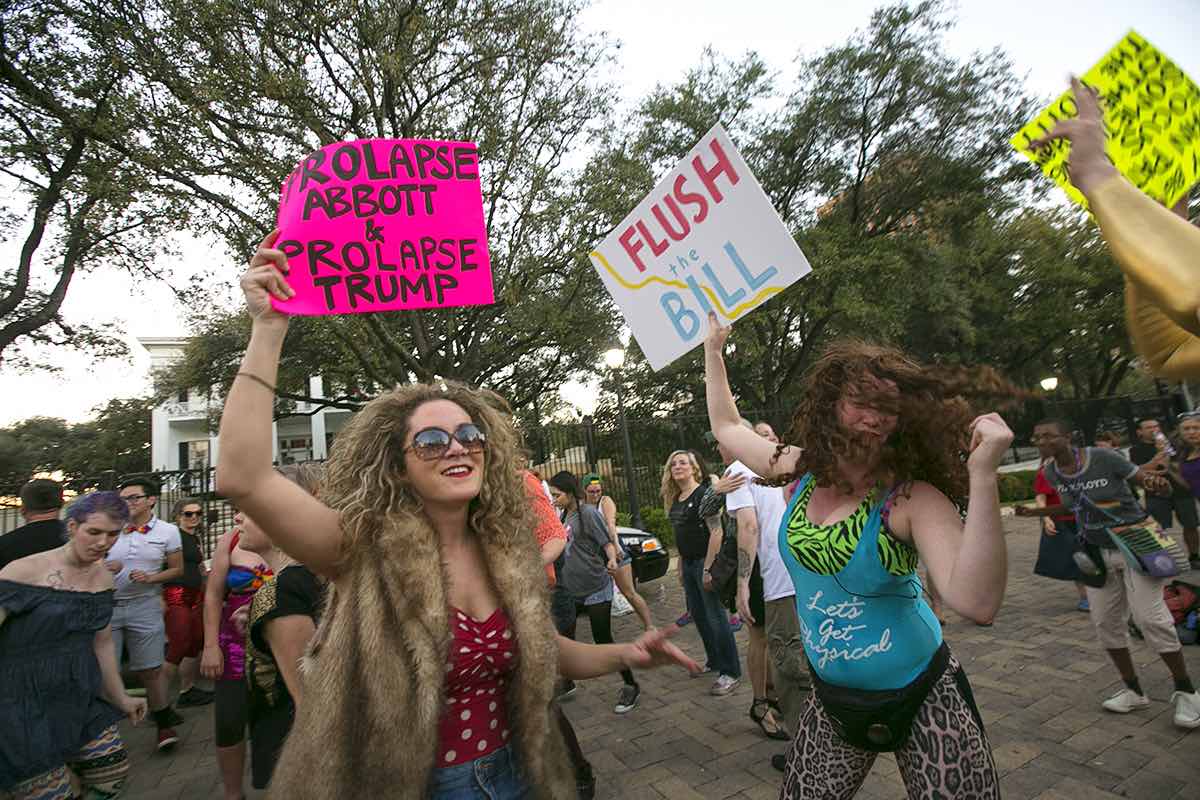 Becca Hyatt and Erica Nix starting 2017's Queer Dance Freakout (Photo by Jana Birchum)
Join the dance party protest, Saturday, Feb. 24, from 5-8pm outside the Texas Capitol. If you need a place to deposit your post-protest adrenaline, head to Cheer Up Charlies for the afterparty: the political edition of Queer Up Charlies. 9pm-close.