Celebrating and advocating 30 years of progress and beyond

Thirty-five years ago, the first case of HIV was diagnosed in Austin in 1983, but another four years would pass before the city would have its own HIV/AIDS service organization. Today, AIDS Services of Austin is the largest and oldest organization of its kind in Central Texas. Achievements on the national and local fronts include significant progress in advocacy as well as advancements in HIV medication, such as PrEP – the little blue pill that blocks the transmission of the virus when taken daily. Other Truvada-based drugs, for people living with HIV, have managed to stop the virus from developing into AIDS. “Originally, when we were in the beginning stages of development and response, we were holding people’s hands while they died,” ASA Chief Executive Officer Paul E. Scott told Gay Place. “Now, as we go into this 30th year – and 30 plus years of the epidemic – we have seen tremendous strides in terms of people living with HIV and having a healthy future.”

But while there is much to celebrate, Scott adds that it’s important to remember HIV treatment and prevention is a complicated and expensive process. “There’s a lack of understanding sometimes of the complexities in terms of what it means to live with HIV,” says Scott. “Theoretically, [HIV treatment] is a simple treatment, but the reality is it involves complex health issues, particularly if you’re going to be taking medication for the rest of your life.” Funds raised through the walk ensure that people continue to have access to HIV services and the treatment they need.

The daylong event also serves as a reminder that HIV is not a bygone of the Eighties and Nineties. As the Chronicle previously reported, Austin has experienced an increase in HIV infections over the last decade, particularly among men who sleep with men. Scott attributes the rise to a growing undercurrent of complacency as well as stigma within the communities. He sees the walk as a way to brings these issues to light and remind folks: “This is still impacting our community.”

For Priscilla Hale, the director of allgo, a statewide QPOC organization and a beneficiary of the event, the AIDS Walk plays a significant role in ending HIV stigma. In Hale’s opinion, addressing the stigma is especially important for communities of color, which are disproportionately affected by HIV today. Hale says the donations generated by the walk “seem to be more anonymous than not,” suggesting that people are afraid of being connected to HIV on a public platform. Nevertheless, Hale believes that by participating in the event, regardless of HIV status, is a way of combatting the negative connotations surrounding the disease. Hale hopes the event succeeds at bringing people together. “It’s one of the ways in which stigma gets addressed,” she explained. “So many people are afraid just to be seen at the AIDS Walk – because then what does that mean? Does that mean, ‘I have HIV.’ And what we try to say is, ‘It doesn’t matter.’ We want people to feel supported.”

The walk also provides LGBTQ youth a chance to better understand the history of HIV in and around Central Texas. According to Out Youth’s Kathryn Gonzalez, a local LGBTQ youth center and advocacy organization, “by hearing the stories of partners, families, and friends of loved ones lost, [youth] begin to grasp the enormity of the crisis.” Like allgo, Out Youth is another beneficiary of the event.

Unlike other U.S. cities that have hosted AIDS Walks in the past, Austin is one of the few that has held one every year since its inception – and it has no plans of stopping anytime soon. For now, ASA and the other sharing agencies hope the event continues the legacy of HIV advocacy, while also looking towards the horizon. “People can build a healthy future with themselves and HIV,” says Scott. “We are on the cusp of having an AIDS-free generation.” 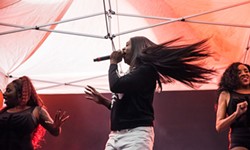