To celebrate the second anniversary of the creation of fetish and philanthropy group GULP (Gear, Leather, Uniform, Pups) these sex-positive samaritans have brought us hunky hip-hop homo Cazwell to host a weekend of kinky camaraderie. We briefly spilled the T over the phone in anticipation of his performance Saturday. AC: We’re excited to have you in Austin.

Cazwell: I really like Texas in general. Texas has really energetic crowds. Austin is really laid back and weird. I feel like it’s one of the places where I still remember people’s names. I’ve made a lot a friends there that I could still hang out with anytime. The only thing I’m worried about is that this will be the first time in Texas since I stopped eating meat. I really love the barbecue so I’m going to have to find an alternative that still has barbecue sauce.

AC: What are you currently listening to? Who is currently influencing you?

Cazwell: I’m really into Leikeli47 right now. Her new album Wash and Set is really amazing. Cakes the Killa. A lot of female rappers that I feel don’t get enough shine. Wash and Set is probably the best album of the year.

AC: How do you come up with your ideas?

Cazwell: It’s always different. I try to write three pages every day. I typically just have an idea for a hook or title or theme and go from there. I usually have a sound in mind as well. Hold up one second … you know Peppermint?

Cazwell: She’s blowing up my phone right now and I’m like bitch I’m on an interview. We actually have an EP coming out together. We just shot a video in New York last week. But anyway, I try to be really consistent. I put a lot of pressure to get things done and nothing inspires me like a deadline.

AC: I can’t wait to hear your Peppermint collaboration. Do you have anything else coming up?

Cazwell: Right now I’m really focusing on my EP which I want to release on Valentine’s Day then the EP with me and Peppermint called Blend which we’ll try to get out late 2017 early 2018.

AC: Is the EP you’re trying to release on Valentine’s Day romantically inclined?

Cazwell: No. I just like Valentine’s Day. I don’t know, I always want to drop an album that day. That’s a good question.

AC: Do you have a Valentine?

Cazwell: Nope. No, I’m not seeing anyone right now. I’m focusing on the music. 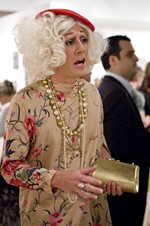 The Impossible Dream
We've got your Friday Night Schedule.