Will & Grace Returns to TV

The beloved Nineties sitcom gets 2017-ified for the reboot

Last night, Will & Grace returned to prime time after an 11-year hiatus, and gay bars around the country hosted viewing parties. Austin’s Rain was just one local spot where fans could satisfy their group-viewing desires.

As the premiere drew nearer, the crowd, an equal mix of young and older generations, debated what the quirky, best-friend sitcom would look like in 2017. Did the titular duo's kids get married after all? Is Stan – er – Karen still rich? Who will be Jack’s latest boy toy? The questions flowed until the room went dark, marking the show's return. 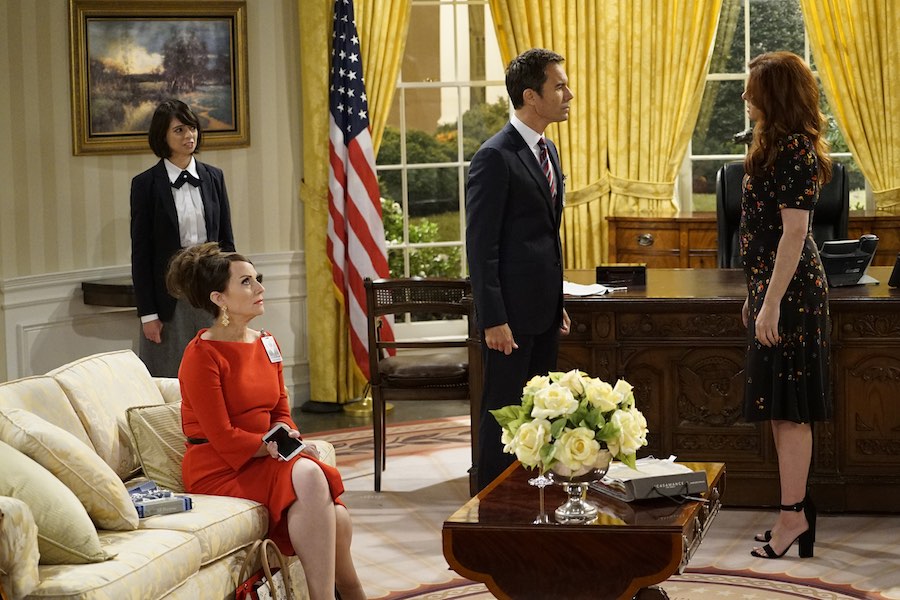 Will & Grace back on prime time (Photo courtesy of NBC)

Last viewers saw, Will Truman (Eric McCormack) and his bff Grace Adler (Debra Messing) ended the show after an eight-year run with marriages to their respective partners and a flash-forward to their children meeting as young adults in college. And who could forget that final duet of “Unforgettable” by Karen Walker (Megan Mullally) and Jack McFarland (Sean Hayes)?

The opening of last night’s episode, however, suggests it was all a dream. Or at least a martini-and-prescription-pill-fueled daydream of Karen’s that’s only partially true. Now, Will and Grace have since separated from their spouses and are once again living together in Will’s apartment. The gang assures Karen that she’s still rich and Stan is very much alive. Jack is living across the hall from Will and enjoying the online dating scene. And, as it turns out, Will’s and Grace’s kids were never born …

But it doesn’t matter. The rebooted season of Will & Grace doesn’t waste time on making things canon. Instead, it stays true to the show’s signature silly and slapstick nature by reviving the cast’s comedic chemistry and tight wordplay fans so dearly love.

What has changed, though, is the world. It’s 2017 (not 1998 when the original series premiered), which the first new episode asserted with contemporary LGBTQ culture references and Trump allusions. A Caitlyn Jenner joke was made before the first commercial break – right before Jack pulled a duck face for his new Grindr profile pic. Karen is now besties with the president’s wife “Melanio,” and has landed Grace a job redecorating the Oval Office, while Will is busy chasing after Steve Sandoval, a conservative congressman who also happens to be a hunky gay dude. One joke in particular, where Grace uses a Cheetos bag to represent the President’s skin tone when color-matching the Oval Office’s drapes provoked a resounding chorus of “Yasss!” from Rain's live audience.

The episode concluded with Will and Steve’s flirtation unresolved and the revelation that Grace never redecorated the Oval, though she did drop a “Make America Gay Again” hat on the Resolute desk chair. Yet the ending felt rushed, which caused the “resistance” message running throughout the episode to fall flat. The hat, however, reminded viewers just how groundbreaking the show’s representation of LGBTQ culture and characters was when it first aired in the late Nineties. For some of us, the new season of Will & Grace may be too 2017-ified – for others, not enough, but right now, the goofy shenanigans of Will, Grace, Jack, and Karen provide a welcoming break from reality.

New COVID Milestones, but the Same Message: Get Vaccinated
Austin Public Health reflections on the road to herd immunity