The Equality March Hopes to Unify and Empower

As the second half of 2017 approaches with eye-blinking speed, it’s important to stay active in our communities and continue the fight for equality. Just as the international Women’s March on Jan. 21 welcomed the new year and opposition to Donald Trump’s presidential reign, queers across the country are ushering in Pride Month with Equality Marches. This Sunday, June 11, Austin will host a sister protest to D.C.’s National Equality March created to continue the LGBTQ community’s legacy of activism, which officially began with the June 1969 Stonewall Riots. Beginning and ending at the Texas State Capitol, the protest hopes to draw attention to local and national discriminatory legislation. On Tue., June 6, Gov. Greg Abbott called a special session, which includes another attempt at pushing the now notorious Senate Bill 6 into law. If passed, the “bathroom bill” would force trans and gender nonconforming children and adults to use the restroom/dressing room/changing facility that aligns with the gender marked on their birth certificate.

The goal of the march is not only to bring people together in solidarity, but to show anti-LGBTQ lawmakers that the queer community is active and strong – both in conviction and size. Queer Rights ATX campaigner and march organizer Taylor Jones told The Gay Place, “it is as much for us to not feel alone, to strengthen the bonds of community as it is to flex our collective muscle at those who intend to marginalize, disempower, and disenfranchise us.”

Queer Rights ATX joined forces with several local LGBTQ organizations including Austin Pride, The Human Rights Campaign (HRC), QueerBomb, and United We Dream to make the Austin march a reality. Former Houston Mayor Annise Parker will speak during the rally portion, along with Ray Hill, a queer and convicts’ rights activist known for his work with Harvey Milk, and Fatima Mann – an intersectional feminist and queer activist who co-founded Counter Balnace ATX. According to Jones, each speaker was chosen to reflect the diverse voices within our LGBTQ community and help unite queer people from all backgrounds. “Part of healing the fractures and fissures within our LGBTQ family involves honoring and recognizing the marginalization and quieting of voices within our own communities,” says Jones. “We hoped to host speakers that could address this and provide means for impactful action.”

At a time when the rights of all minorities are threatened (with travel bans, “show me your papers” laws, a pending Affordable Care Act Repeal, and continuous implementation of religious liberty laws), the Equality March seeks to be a community unifier to ensure there’s any equality left to defend in the future. “[The Equality March] is the roll call for an assembly of activists ready to shape their own living histories,” says Jones. “We stand on the shoulders of giants before us who have paved the way with their lives – we are obligated to honor their legacies, as well as future generations by defending the progress we've made.” 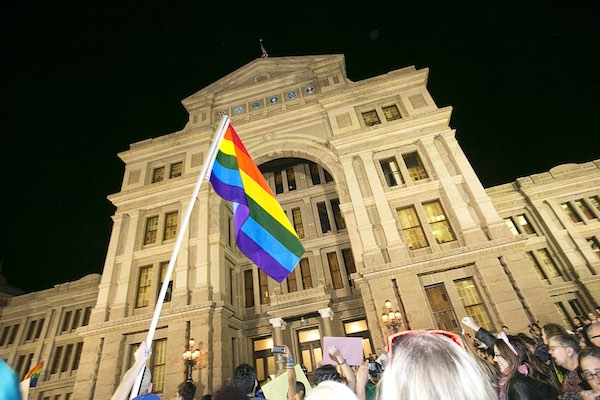 LGBTQ Rally Against the Trump Inauguration (Photo by Jana Birchum)

The rally will begin at noon, Sunday, June 11, on the south steps of the Texas Capitol, followed by a march through Downtown Austin and culminating at the Capitol at 2pm.