Last weekend, Austin Black Pride celebrated its second year of successful events. While the festivities don't include a parade, they created spaces and programming that cater to Austin's black LGBTQ community. 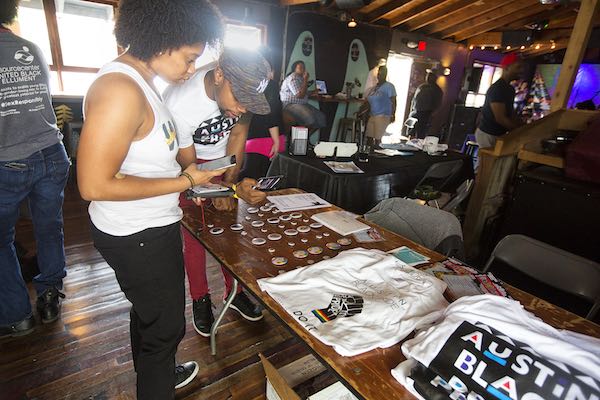 Thursday’s kickoff event, Art Is Cool: Visual Gallery + Melodic Showcase, provided a welcoming, inclusive, and family-friendly environment complete with a traditional cookout, live performances, and an impressive showcase of works by local black artists. Ray Jones, an Austin resident of two years, told the Chronicle he was “impressed by the outcome of the organizers’ efforts,” and happy with the event venues located on the Eastside.

In Jones’ opinion, the east-of-35 locations were more “chill, laid back, and authentic” than those of other popular social districts, such as the Domain or Downtown, where he has attended other meetups for black queer men. “Being black, being gay – maybe not being affluent – and being in those spaces … someone is bound to give a micro-aggression, like you’re not supposed to be there,” explained Jones. “It feels nice to take off my cool and just be myself on the Eastside.”

Sheldon McNeal, president and co-founder of ABP, affirmed the importance of specific events created for and by queer people of color, especially in a city that typically lacks such spaces. “Austin does have black queer individuals, but the community is very dispersed. You can’t just go to one space to congregate and meet people.”

Jones agreed, for Austinites Black Pride offered a much needed group of events. He noted a difference between Austin and other big cities like Atlanta, D.C., and Houston. “In Austin, if you’re black and queer, where do you have to go? Nowhere. I still don’t know where even just black people go.”

While Austin Black Pride works with the organizers of Austin Pride on the annual events held in August, McNeal explained that Austin Pride doesn’t always have the resources or the know-how to address disparities that arise for local people of color. ABP is here to, as McNeal put it, “pick up the slack,” and discuss how to "connect” as well as preserve the culture and history of black queer individuals. The ABP event page reiterates, “ABP was not created to further divide, bash, or belittle non-Black LGBTQ communities, but to instead preserve the culture and history, while also celebrating the evolution of Black LGBTQ folk.” It might seem like Black Pride is just an annual series of events, but ABP stays active throughout the year. Since the organization's formation in early 2016, they've held self-defense classes and hosted LGBTQ focus groups. Colorful Conversations, the group’s quarterly panel series, discusses topics such as representation, working with allies, and self-care. And Sunday’s final Black Pride event also marked the debut of a new bi-weekly podcast, “Crown Them Royal,” in which three “Black Gay Men and Ron's bi-ass” discuss “pop culture, black culture, dating, and more.” It is currently available on SoundCloud and will be up shortly on iTunes. You can also follow them on Instagram.