Queer Animation, a short film collection curated by Judith Foster, left the audience amazed and inspired at Sunday's screening on the last day of the 2017 OUTsider Festival.

The showcase, co-sponsored by Austin Film Society, featured 13 films from various countries, including Japan, Israel, and Germany – each sharing multicultural perspectives on the meaning of queerness.

The shorts cultivated an array of emotions, creating a visceral experience for the Vortex audience. When I Love Hooligans by Jan-Dirk Bouw evoked intense discomfort through images of violence and homophobia, such emotions were immediately met with the contrasting mood of playfulness in Siri Melchior’s The Dog Who Was a Cat Inside. This continuous emotional dissonance between films fostered a space in which the audience was compelled to relate their own queerness to the onscreen characters. The Vortex, for that time, became a chamber of visual empathy.

Halperin, along with the other featured filmmakers, proved animation is a valuable medium of expression for queer artists. The flexibility and the incorporation of images and illustration, music, and storytelling allows for endless possibilities to manifest the depth of queer identity. From the interview-style dialogue of If I Was a Man (Margot Reumont), to the continuous narration of Sunday Lunch (Céline Devaux), to the speechless film Naked Youth (Kojiro Shishido), it is understood that queer narratives in animation are limitless. 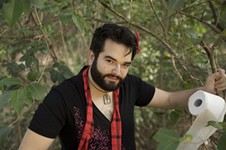