Rudy Ramirez and his quest for queer belonging

Rudy Ramirez describes his work by saying, “If you like game shows, eating chips and salsa, or professional sports-style play-by-plays of gay sex, this is the show for you!”

Promised Land follows Ramirez on his quest to find a sense of queer belonging, which ultimately leads him to an outhouse-sporting establishment of queers in Appalachia. His journey is long and fraught with peril – the loathed “Abercrombie Zombies” chief amongst the myriad dangers that face him – but never ceases to convey at least a slight glittery glimmer of hope.

It’s hard to pick outstanding moments from a show when the entirety of it is a highlight reel, but the part that elicited both the most laughter and groans from the full theatre portrayed Ramirez conversing with the preening shop proprietor of the imagined business “Gay Identities R Us.” The proprietor asks a series of pointed questions, each one theoretically bringing Ramirez a bit closer to his best gay identity. Yet none of the options fully reflect him as a person. He’d have to lose weight to be a twink, isn’t “manly” enough to be a bear, and doesn’t want any of the stereotyped offerings from the “whole line for Mexicans.”

Thankfully, Ramirez ditches the store, continues his journey, and eventually finds the belonging that he craves. Magically, through his enthusiastic storytelling and audience engagement, Ramirez shares this Promised Land with viewers. Just before sharing a chips and salsa communion with the crowd, Ramirez instructs the audience to “stand up and look at everybody here around you. They’ve been walking a path with you, even though you may not know it.” With this, he shows us all that the Promised Land is a bit closer than we might imagine. This Is (Not) the Gayest Show You’ll Ever See: A Review
Queer comics take over Coldtowne on Saturday nights 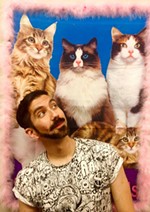