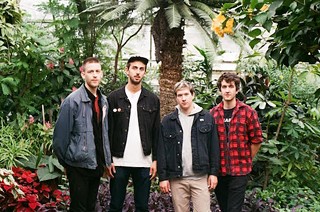 Little Junior, the queerish Toronto-based band, is looking to shake up the pop punk scene. With gay-themed songs and an anti-misogynistic mindset, these four guys might just turn the genre on its head.

“I’d like to think that we are super original,” said Rane Elliott-Armstrong, the band's lead singer. But original doesn't mean they lack inspiration. In fact, Elliott-Armstrong credits both Weezer and the Pixies as Little Junior's musical influencers.

Comprising Elliott-Armstrong, his brother Chai Elliott-Armstrong, and their two buddies Lucas Meilach-Boston and Jackson Beyer, the foursome has been playing music together since they were kids. They found their name in an unlikely place – on the back of a discarded lettuce box “behind our friend’s apartment,” explained Elliott-Armstrong. “It doesn’t have a meaning, [it’s] just something that sounds cool.”

Little Junior takes a different approach to pop punk. Instead of writing about typical hetero-relationship troubles often found in the genre, they want to have fun with their music. And, maybe sometimes, send a powerful message.

“We wrote a song about the blood ban on gay men – it’s very political,” explained Elliott-Armstrong, who identifies as gay. “There’s a song about my boyfriend and one about a fight I had with a friend.”

In “Crybaby,” their first single off their forthcoming album (out later this year), Elliott-Armstrong contemplates the destruction of his career and reputation. “The lyrics are taken literally as what would happen if I was the last person on Earth,” said Elliott-Armstrong. The song specifically focuses on “how the music scene is heteronormative and male-centric, and wanting to get distance from all of that.”

Even though they take a lighthearted approach to music, Little Junior is dedicated to making a mark on the scene. According to Elliott-Armstrong, this is most apparent when they perform for an audience. “Putting on a killer live show is something we as a band strive to perfect. We want to be the band that’s cute and approachable.”

On Jan. 23, quartet kicked off their first U.S. tour with July Talk. They will play 19 shows in 27 days with a stop at Austin’s Sidewinder on Feb. 3. Later this year, Little Junior will release their debut album. 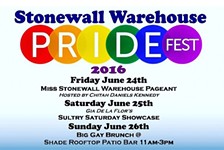 Lookin' Gayly Ahead
Fab queer events to prepare for this summer