Coming Out in the Dark

Behind the creation of Friday's LGBTQ Human Rights Rally

As is often the case these days, an idea came to fruition through social media. One person put out a call to action on Facebook to organize an LGBTQ protest on the evening of the inauguration. People from all over the Austin area responded.

But when the momentum for the original march began to fade, four of the people decided to take the lead in organizing what is now Friday night’s LGBTQ Human Rights Rally. 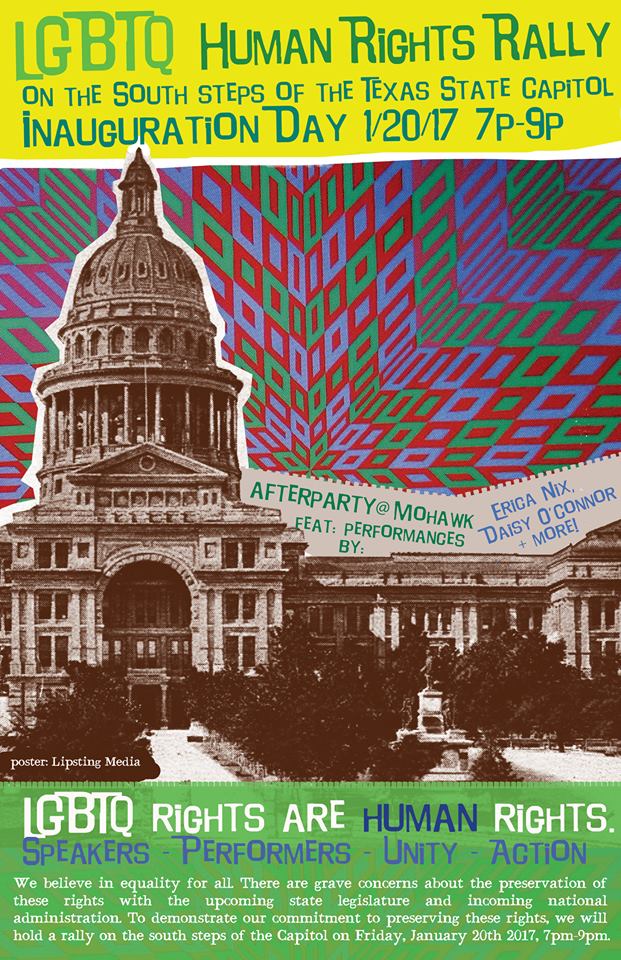 With just over two weeks of planning, Lisa Kettyle, Suzy Shelor, Lynda Blakeslee, and Joette Pelliccia have created an event with the goal of bringing people together to show solidarity, support, and strength. They’ve managed in this short time to involve local performers, activists, and business owners in the Jan. 20 rally and afterparty at Mohawk. Organizers are expecting a few hundred people, including those who may be attending other events on Friday and Saturday.

For these four women it was important to express the LGBTQ community’s own interests and not just be a subset of another group that may share common goals. Current proposed legislation, like Senate Bill 6 (commonly referred to as the bathroom bill), confirms we're nowhere near achieving equal rights in our country.

“We want to create a safe space for the queer community to express their concerns about pending anti-LGBTQ legislation on both the state and national level,” explained Blakeslee. “We also wanted to put out a call to action to encourage folks to become active in fighting this legislation and to support legislation that ensures equal, human rights for all LGBTQ persons. In some ways, we also wanted to model that anyone can do this kind of organization on a grassroots level. You don't have to be affiliated with any particular organization to have your voice heard.”

Though the LGBTQ rally stands apart from the earlier marches, Kettyle acknowledges that they’ll be “joining up with One Resistance for the afterparty at Mohawk to cap off the night with unity.” Prior to that, Kettyle and her co-organizers want to ensure that the queer community’s voice is not “silenced or drowned out. We wanted to be sure that wouldn't happen.”

Kettyle mentioned concerns about the repeal of the Affordable Care Act and how that will likely affect the queer and transgender communities. According to the U.S. Department of Health and Human Services, “Section 1557 of the ACA prohibits discrimination on the basis of gender identity and sex stereotyping.”

There’s also the very real threat to Planned Parenthood under the Trump regime. While in Congress, Vice President-elect Mike Pence introduced legislation to ban Planned Parenthood from receiving federal funding, and Texas conservatives are currently trying to remove the health care clinic from Medicaid. Although life has improved greatly for the LGBTQ community in the past eight years, we are on a “dangerous precipice,” said Shelor. The goal is to stand together as a group and let it be heard that “we are not going back.”