Behind the Bars Part II

In honor of Pride and this week's queer spaces feature, we've reached out to local queers around town and asked them to share their most poignant and messy memories of our beloved (and bygone) LGBTQ bars. Gay Place's OG editor Kate Messer put together Behind the Bars (Part I) to document our spaces in 2009. We're here to continue it. Bernadette's was truly special. Sure, the bathrooms never worked and there was an inescapable stench to it, but there was a pool table and a lot of good times had. More than that, it was a safe hideaway for all queers. A dark speakeasy with no lit-up sign to let the outside world know what was going on.

Bernadette's was welcome to anyone. Everyone in the "know" went. However blurry my memories were made by the BYO-liquor, I always felt safe and protected. Any night there could be a punk show or a Selena dance party. Those were my favorite nights. Sweaty, unfiltered dancing accompanied by friends and lovers. It was definitely a place "untouched" by the mainstream world of heterosexuality. Austin doesn't really have that anymore. – Ezra Edwards of GirlFriend and HereandQueerATX 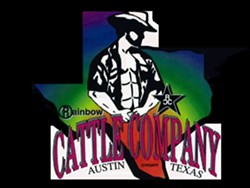 Although Yelp reviews of it exist, the Rainbow Cattle Company was truly prior to the Yelp era. Instead, you relied on your own embodied experiences of a place … the way the room felt.

Rainbow Cattle Company was not supposed to be my scene – meaning that I was never really enthralled with country music (although country was not exclusively played at RCC). But despite only going a handful of times, my experiences were happy and consistent. It is a place I miss. The bar was one of the only ones to boast a healthy mix of men and women, even if the two bars of Rainbow Cattle Company seemed to break down along gendered lines. Gay men were served by male bartenders in the front bar, and lesbians were served by female bartenders in the back bar. This division wasn’t strict, but it was standard operating procedure, and it will come as no surprise to those who know me that I preferred the back bar, which was, to be frank, rowdier and more convivial-seeming because of its location and tight space limitations.

In my mind I remember the dance floor being raised at an absurd height (I’m sure I’m wrong), which jibes with how it felt to be picked up by a friendly cowboy and twirled on the dance floor. Becoming intimate with strangers – ones you might never bed, but whom you would imagine lying next to, nevertheless – was what RCC seemed to be about … desire circulated in pairs and lines. – Andy Campbell, Assistant Professor of Critical Studies at USC-Roski and former Gay Place contributor

Rusty Spurs will always have a special place in my heart for a few reasons, or should I say, a few different events. My most favorite "night" at Rusty's was the talent show they hosted for six straight weeks. I competed against a variety of acts including an opera singer, break dancers, and hula-hooping duo. Unfortunately I pulled out my best act too soon. I sang a Broadway medley while popping balloons to expose my pastied boobs, and tap danced the finale. That night I won to the loudest applause, but the following week I lost to the hula hoopers. My act of rubbing chocolate sauce all over my body to the tune of "Car Wash" had failed miserably, ending with me slipping face first into a tarp filled with chocolate. I loved that show because it gave me an opportunity to try different performances with a supportive audience. We were all a bunch of weirdos seeking the limelight for 10 minutes once a week. While Rusty Spurs was designed for gay cowboys, it attracted everybody including queer freaks and geeky hetero norms. It had the flavor of a small gay bar in any small town saying, “howdy" and "sweetheart” to all the freaks, geeks, steers, and queers. – Erica Nix, owner of Austin's only queer fitness gym, Transform 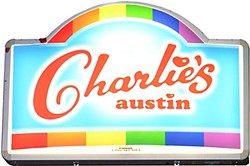 Dim, dusty, and divey – it was the best of times, it was the worst of times for Charlie's in Austin in 2009. Fresh off the bus (or my 2002 Chevy Malibu) in Austin, Yelp told me Charlie's was the closest queer establishment to my work, so as soon as I got paid, I went for a happy hour drink. Located at 1301 Lavaca St., happy hour was an interesting event in the last years of Charlie’s: Straight state employees and others would wander into the large, divided bar. No matter your orientation, you never knew quite what to expect here.

Thanks to the Chronicle’s Gay Place, I learned that Tuesday was steak dinner night, and this poor gay could not wait for such a homey-feeling bar to serve some fresh meat.

I’m pretty sure that dinner followed a dance-off or DJ party with impressive strippers who shook like a salt shaker over your salad and steak. Happy hour led to a fun night with groups of strangers. Writing this I realize I miss that bar. No queer establishment can ever truly replace it. – Dan Gray, Gay Place contributor Castro's Warehouse was opened with the intention of bringing something different to Fourth Street. I remember DJ'ing their first Sunday night drag show, which happened to be on Easter Sunday. A drag queen named Cupcake – dressed in the Playboy Bunny uniform – squatted over an Easter basket and shot three well-lubricated, hard-boiled eggs into it. Talk about a mission statement! There were many late nights in this glorious smut box. A unisex bathroom that was the stage to more dramedy than an episode of Ally McBeal, the temptations of a machine that made Red Bull vodka slushies, and the ghosts of all the sharks from the previous tenants’ aquarium dance floor certainly haunted the place. God bless this mess. – Mouthfeel, aka Jeremy von Stilb of Deep Inside and Homo Arigato at the Drafthouse I moved to Austin from a small, conservative town in Virginia where the closest gay bar was an hour away. My only friend here was a lesbian I had known in high school who gave me the rundown of the gay bar options in town. Wait – there's a bar for lesbians? I made plans to visit … but what would the women be like? Would they think I was cool? Would they be able to tell that I had been married to a guy for the last 10 years? On the night I first got the courage to go, I walked up to the club, nervously glancing at a group smoking outside and taking internal notes: They look cool, I like her plugs, that girl nodded at me, I think I nodded back appropriately. I walked into a dark room pulsing with music, immediately went to the bar, and blushed at the cute bartender. Beer in hand, nerves screaming, I sidled up to a group of women and casually inserted myself into their conversation. Yes, I am new here, I like Austin very much, etc., etc. By the end of the night, I'd met so many people and left with a happy buzz and mental list of all the new places they'd mentioned. I could do this. Thank you, Lipstick, for showing me a glimpse of my people – I don't know where I'd be without you. – Ashley Marshall of Gayheart Clothing & Plezzure Island

Boyz Cellar was the place to go when you weren't quite ready to go home. The music was louder and there were fewer clothes on the dance floor. It was a place with more freedom for self-expression than its neighbors – and the bathroom encounters were proof of that. No one did a theme night like BC, and the Jungle Party could not be missed. I met some of the best people there and still have the pleasure of calling them friends today. – Marcus Sanchez, Mpowerment Coordinator at the Q Austin The way pop-culture describes it, coming out happens in a single burst – people may slam the door or bake a cake, but then you are free to wave a boa on a Pride float. Of course, that’s not how it goes at all. Coming out is a series of small steps and stumbles. It takes more than a grand gesture.

But I never knew just how many paces I still had left until I first walked into the dusty black corridor of the Chain Drive. Perhaps owing to my evangelical background or my family’s lean toward privacy, I rarely talked about the sex part of my sexuality. Even among other queer men, I would get visibly embarrassed if anyone mentioned I was a bottom or commented on anything more personal than the way I dressed. In reality, I may have been hooking up as much as any young man, gay or straight, but shame kept me from acknowledging myself as fully human.

Chain Drive was the opposite of all that – lascivious, lurid, full of as much touching as looking. The men on the side patio didn’t particularly care if you stared. I lasted about 30 minutes before my fear took over, but I kept coming back. Over the years, I made out aggressively on the dance floor, walked around in my underwear on a theme night, and fell into the pond (in bad drag no less), but I never felt self-conscious like I did that first night. And slowly, I began to be the type of queer man that didn’t apologize for the fact that I have sex with men.

Mainstream society tsk-tsks that behavior when it comes from queer bodies, calling it deviant or decadent with numbing hypocrisy. Even LGBTQ movements – like the march toward Marriage Equality – sought hard to ignore that our genitals exist. When we talk about society treating us as lesser than, that’s part of what we mean – we have to pretend to be something that's less than whole. That’s why our spaces have power, why Chain Drive had power. No other bar in town has since felt so unapologetic. – Brandon Watson, Chronicle Food Editor