This week it’s hard to celebrate or rejoice in the little things. Queer dance parties, drag shows, LGBTQ films – it all feels too soon to be happy. But, in the aftermath of tragedy we must look for silver linings. Tonight, aGLIFF (Austin Gay and Lesbian International Film Fest) hosts the Texas premiere of Suited, and it’s the kind of lining we might just need. 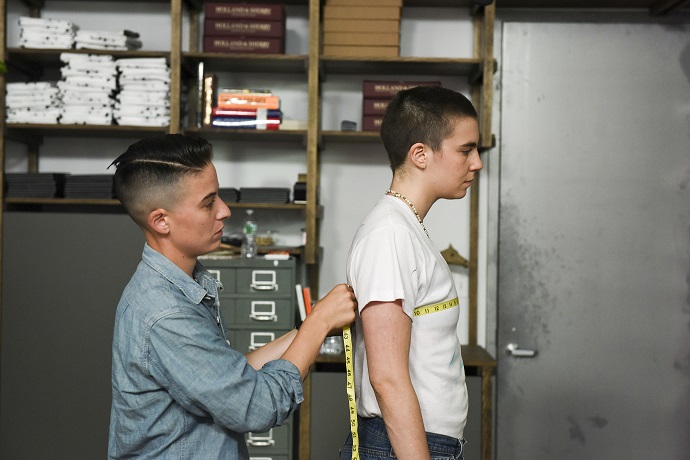 The HBO documentary, directed by Jason Benjamin and produced by Lena Dunham and Jenni Konner, follows the work of clothiers Bindle & Keep and six of their clients. For those that don’t know, Bindle & Keep is the Brooklyn-based suitmaking duo, Rae Tutera and Daniel Friedman, who specialize in handcrafting suits for the LGBTQ community.

In January, the 75-minute film premiered at Sundance, but won’t air on HBO until next Monday (June 20). “Suited isn’t about me and Rae, or suits” explains Friedman.

“It offers a glimpse into six people’s lives. It’s diverse as far as location and class, but the idea here is to give some portraits. It’s really powerful to see non-binary people represented – maybe for the first time,” says Tutera. “Visibility isn’t going to save us per se, but I do hope it helps break down the propaganda we’re seeing right now with bathroom laws and whatnot. Hopefully some people will see this film and realize that the people the media [and lawmakers] are vilifying are actually human beings with feelings.”

Friedman was the original founder of Bindle & Keep. However, when he started the company in the summer of 2011, his intent was to make high-end suits for the Wall Street crowd. As a single suitmaker his plan was to visit his clients at their homes or offices to get measurements and meet face to face. It was Tutera, who reached out to him for an apprenticeship six months later, that really turned the business toward queer and gender nonconforming communities.

“Rae mentioned apprenticing with Bindle & Keep on their blog,” explains Friedman on how the LGBTQ world came to trust the clothiers. “Since Rae is a part of the community there seemed to be this feeling of ‘if [Bindle & Keep] is working with Rae they might be the people to put me in a men’s suit.'” 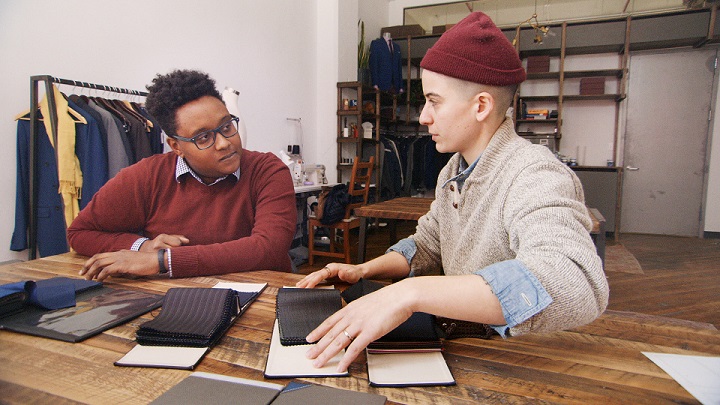 Today – just five years after it all began – Tutera and Friedman estimate that 90% of their client base comes from the queer community, which is what ultimately attracted Benjamin to Bindle & Keep. A year after Tutera joined forces with Friedman, The New York Times featured an article on the duo and with it came a flowing of love and support letters. “We knew we had lots of LGBTQ clients, but after that article we were getting ‘thank you for existing’ letters,” says Tutera. “I don’t think we knew Bindle & Keep had so much potential to help people.”

It may seem like a little thing, but for many masculine of center individuals finding clothes that fit properly can be an incredibly difficult task. Between hips, busts, and shoulder widths, mainstream men’s clothing frequently falls short, long, or tight on queer bodies. Dress clothing, however, seems to be even more ill-fitting and therefore can be an even more stressful shopping experience.

“By going into people’s homes we create an environment that’s a safe place to talk about one’s body,” says Friedman. This privacy though was what originally worried the pair about making Suited. Tutera originally met with Benjamin after he read the Times piece, and while Tutera took an immediate liking to the director (and sound operator for HBO’s Girls), neither designer was sure they could make this documentary.

“It’s such a private experience,” explains Tutera. “We weren’t sure our clients would want to share that on camera.” But they decided to give it a shot and placed a questionnaire on their website as a “ploy” to get their clients to write about themselves and their clothing struggles. It worked. “People were writing amazing stuff – we realized people were willing to sit down and write about themselves. That’s how we found people for the film.”

Aside from breaking down stereotypes and humanizing queer and trans bodies – which is a tall enough order – Friedman also hopes that Bindle & Keep can work as an example for other companies even beyond clothing. “We’re carrying powerful DNA. It’s kind of my motto that once people realize you don’t need a Ph.D. in gender studies to make people happy,” he says. “I’ve never had a conversation with a client about sexuality. It’s always about how people want to feel.”

Suited premieres tonight at Alamo Drafthouse South Lamar, 7:30pm. Get tickets here. It’s presented by aGLIFF as part of their monthly screening series. And remember, taking time to enjoy and appreciate the little things is how we heal.