Paving the Way for Queers in Comedy 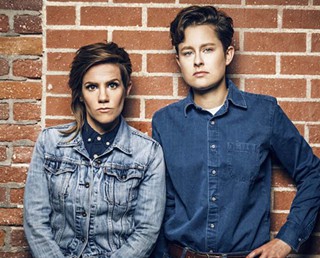 With Austin becoming widely recognized as a thriving city for comedy and South by Southwest internationally known for being at forefront of great things, I made the decision to start this year’s festival by trying to catch as much comedy as possible.

I feel fortunate anytime I am able to watch even one queer comedian onstage honing their craft, so I knew I would be in for an absolute treat seeing Saturday’s Take My Wife showcase hosted by newlyweds Cameron Esposito and Rhea Butcher.

I managed to snag a seat in the front row, but the woman who was waiting at the start of the line with me was a little apprehensive to follow suit, fearful that being so close to the stage could result in too much personal attention. I assured her – taking off my baseball cap to reveal my unintentional yet remarkably similar to Esposito’s side-mullet haircut – that between the two of us it was more likely that I would take any heat. As it turns out, the only attention we were paid was praise at being the two loudest people gasping at an anecdote telling Esposito’s own reaction to arriving first to a dinner party, only to be greeted at the door by none other than Kate Moenning, best known to queers and lesbians everywhere as Shane (McCutcheon of Showtime’s The L Word).

The only audience member to truly be called out was a woman using her phone in the front row. “I was only tweeting about the show. I said ‘Cameron Esposito and Rhea Butcher killing it at SXSW comedy,’”the audience member explained. Esposito quickly shifted her demeanor and thanked the woman for promoting the show before she and Butcher posed for a photo. “The internet is going to think that this is a really in-your-face show,” they joked.

Between sharing their own stories and jokes, they brought out Brooks Wheelan, Jonah Ray and Moshe Kasher who were invited to perform. During one set it was even called out that – for a showcase called Take My Wife – there sure were a lot of dudes. Even so, it was still remarkably on point with bits about marriage and experiences the male comedians shared with their own wives.

Although the upcoming Seeso original series Take My Wife is only now filming, it’s become my most anticipated comedy for 2016 after seeing Esposito and Butcher on stage together. Butcher told an anecdote about touring with Esposito and stopping at a Wendy’s. She was contemplating ordering a Frosty until a man walked past her behind the counter carrying the large “bladder” of Frosty mix maternally, cradling it in his arm while resting it against his shoulder, then locking eyes with her as he gave the bottom of the bag a little love tap. As each further disturbing detail was revealed, Esposito was dismayed that she was never told this story and questioned where she was when this occurred. Butcher eventually mentioned what was playing on the dueling TVs at the time, which caused Esposito to remember being there, sans any Frosty story. Clearly baffled, Esposito questioned why it wasn’t worth mentioning, “after that did you think ‘eh, stranger things will happen?'”

The energy and chemistry the pair share is so dynamic, and the way they play off of each other feels very organic when watching them on stage. The flow of their set felt natural, as if we were witnessing a casual conversation between the two, peppered with hilarity. At the top of their set, Esposito apologized to Butcher for yelling at her backstage immediately before they came out. “It was 90 seconds ago, I know this because the guy back there said ‘90 seconds!’ and then you yelled ‘Are you paying attention to me?’” Butcher playfully responded.

Esposito later reminisced about performing at SXSW in years past. They recalled long phone conversations earlier on in their relationship while Esposito walked Downtown from her hotel telling her things to impress her.

“We were only dating casually, but you were saying, ‘I want to have a show with you,’” Butcher said, calling out her now wife.

“And four years later, here we are,” replied Esposito. Their connection – which not only makes audiences laugh, but also each other – while doing the thing they both love is incredibly refreshing. It left no doubt in my mind that these two are paving the way for greater visibility and acceptance for queers in comedy. 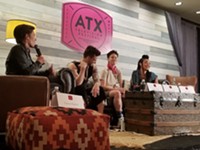