The Gay Place Guide to a Kweer SX

In just a few days, South By Southwest will once again unleash its unshakable grip over Austin. Time will warp and everyone – both local and out-of-towners – will be plunged into the black hole that is the 10-day long festival.

Here at The Gay Place we couldn’t help noticing, however, how much gayer SX has grown. From actual celebrities (Ellen Page is giving a keynote), to the gaymous – “unconventionally masculine” – website, DapperQ, who’s hosting an interactive panel on queer fashion; plus loads of DIY and official LGBTQIA musical showcases, this certainly feels like the year we kweer’d SXSW. 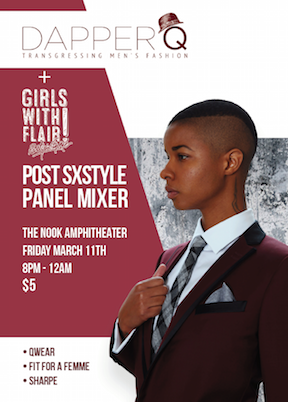 For 2016, in place of a Pro Tips (check out Kate Messer and Andy Campbell’s 2015 guide if this your first rodeo), we’ve got the 4-1-1 and the inside scoop from the QTs behind this year’s extraordinary Q-tastic lineup. Because, as Cheer Up Charlies’ owner Tamara Hoover, breaks it down: “It's glaringly obvious that the best parties are where the queers are.”

Though Music always seems to catch the biggest headlines, both Film and Interactive have caught the queer spark as well. Queer plotlines are featured in festival films such as These C*cksucking Tears and Loev. Directed by Sudhanshu Saria, the latter offers a glimpse into the lives of two Indian men attempting to navigate a their increasingly complicated relationship.

Yet Saria, whose own sexuality is a bit ambiguous, feels that his film is only revolutionary on the small scale. “In the selfish space of my own life? Hell yeah! [Loev screening at SXSW] Blew my mind, changed my world. But in the larger scheme of things, probably not,” explains Saria. “We live in a temperamental world that seems to be spinning too fast for my taste – I hope good sense prevails and love wins over hatred. That would probably qualify more easily as being revolutionary.”

On the other hand, DapperQ’s Creative Director and Editor-in-Chief Anita Dolce Vita considers her site’s panel, Queer Style: Visual Activism & Fashion’s Frontier, to be quite political. “Queer style has its own revolutionary roots, but is also part of a rich legacy of style as visual activism, including the symbolic political resistance of the flapper dress, Zoot suit, and hip hop style,” says Dolce Vita. “We can still be discriminated against in housing, healthcare, education, and employment; can still be bullied and harassed; and can be raped and murdered for the clothing that we wear.”

As the first ever queer fashion panel at SXSW, DapperQ has curated an impressive lineup of gender non-conforming designers and style icons. “LGBTQ individuals are on the forefront of a social movement, leveraging style to create positive social change that extends far beyond members of our own community,” adds Dolce Vita. “We [also] hope to not just call out the mainstream fashion industry for their role in creating harmful, unrealistic beauty norms, but call them in so that industry influencers can be more inclusive, competent, and just.”

Parties will be starting just as soon as the rest and the music will be flowing faster than the Colorado river after a Texas-sized rainstorm. Mouthfeel, aka Jeremy von Stilb is hosting several events this SXSW, including his returning showcase Y’all or Nothing, which he co-throws with Tisha Sparks. “SXSW is the biggest music event in Austin, and while queer events have been happening during SX for years, now there are events focused on LGBTQ performers happening every single night,” says von Stilb on this year’s queer-filled lineup. “Many of these shows are official capacity and others are totally DIY. I think it's a breakthrough moment.” 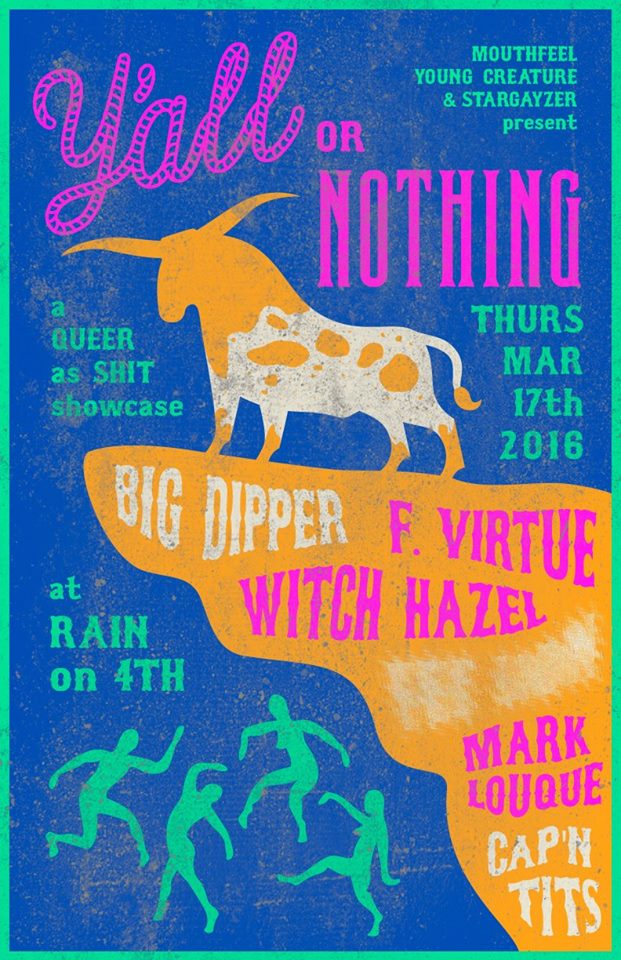 Unofficial Showcase, Y'all or Nothing (Photo courtesy of Mouthfeel)

Von Stilb moved to Austin five years ago, as a fledgling event producer and DJ. After nearly half a decade he’s not only perfected his craft, he’s also dedicated to helping other queer newbies get their start. In fact, Y’all or Nothing places a “strong focus on female, POC, and other ‘others,’” explains Sparks. “It’s a fun, collaborative space for artists creating outside of the mainstream to share their work and experience magical moments with friends and fans.”

“Creatively, queer people are often the vanguards of dance music, particularly in Austin, but little credit is given to us,” von Stilb summarizes. “Having our events happen on a larger scale at SXSW perhaps means we can get exposure for the ideas we are pushing.”

San Antonio’s qpoc art collective, HouseofKenzo has also joined the lineup for an official party featuring Ben Aqua on Saturday, March 19. The collective will include their house DJ, as well as performance and installation art. So what are they most excited about? Diversity. “Too often, modern identity politics limits the true meaning of diversity. We are not talking about skin color, or gender, we are talking about diversity of thoughts and ideas,” says HouseofKenzo. “There is no reason that we should all think the same. We should encourage arguments and discussion because they fuel innovation. Diversity matters.”

Though SXSW is more than a queer festival, we can’t help but admit: Seeing it this gayly glittered warms our queer hearts to the core. For a complete lineup of all things LGBTQIAetc see below and don’t forget to check out the Gay Place listings. If we missed anything, please email gayplace@austinchronicle.com

“Isn't there no better time to wave your freak flag then when thousands of people are in your hometown for a brief moment?” asks Hoover. “Isn't being queer about being true to yourself without apology? During SXSW, there are people from all over, looking for that cultural plug in – it wouldn't be right to not have queer features. As a matter of fact, it would be boring without them.”

Queer Style: Visual Activism & Fashion’s Frontier – For the first time ever SXSW tries on queer fashion. Anita Dolce Vita of dapperQ; Sonny Oram of Qwear; Leon Wu of Sharpe Suiting, and Aja Aguirre of Fit for a Femme will discuss q-style as a movement, a thriving economy, and a mainstay. 3:30-4:30pm. The Westin, Interactive, Gold, Platinum Badges.

DapperQ Post SXStyle Panel Mixer – An evening of impeccable queer style to commemorate SXSW's first ever queer style panel led and produced by the well-dressed QTs of DapperQ. Girls With Flair! co-hosts. 8pm-12mid. The Nook, $5 in advance, $10 at door.

Girls with Flair! Productions Presents God Made Man Wrap Party – God Made Man's creators, Kayla Olson and Nate Locklear, plus the cast and crew of the upcoming film get down and dirty in celebration of the movie's wrap. 2-5pm. The Nook, Free w/RSVP.

Meet Up for LGBTQ Filmmakers – An official SXSW meetup, this one is designed and inclined to help queer movie makers get to know one another and also get to know OutFest. 5pm, JW Marriott, Film Badge, Interactive Badge, Gold Badge, Platinum Badge.

Friends With Benefits: A Queer Vodka + Music SXSW Mixer – With their powers combined DJ Divorcée, Glastonbury’s The Spook School, UnicornBooty.com and social app, Hornet will be the bestest of Friends with Benefits. Frot Vodka will be slinging drinks. 4:30pm. The Iron Bear. Free 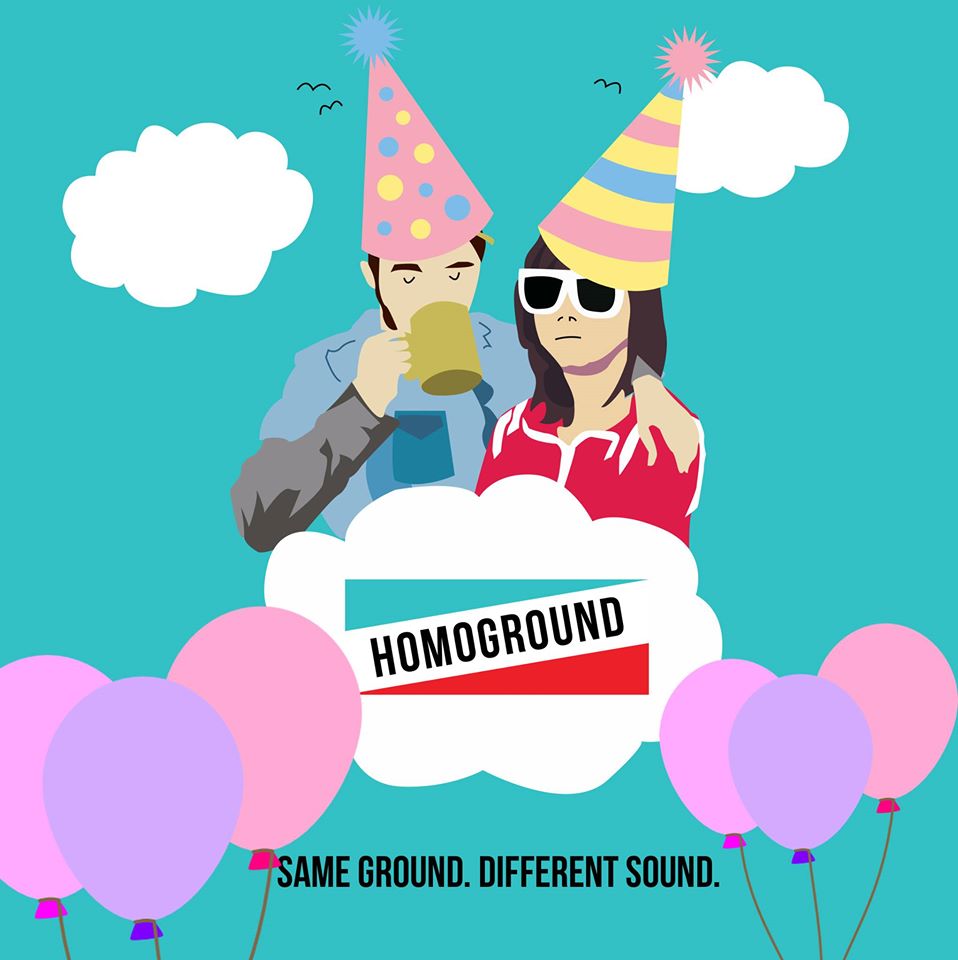 Glitterbeard Unofficial SXSW Showcase – Queer music lovers rejoice – this unofficial showcase promises a sparkly mess of facial hair. And some bands too. If you're into that. 9:30pm, Swan Dive.

Tuezgays SXSW Style – Once again, Sir Glitoris offers up a Tuesgayz served over SXSW. Complete with two rounds of drag shows and the most fabulous qweens. 9pm, Barbarella.

4th Annual Rock Your Package Music Showcase – Tapelenders is bringing the sexy back to SXSW. Catch all the bands – L.A.'s Bur Gur and Leggy, Austin's Pollen RX and Prom Threat, etc. – performing in their undies, only. Free adult beverages for the 21+. 12pm. Tapelenders Video

Stargayzer Presents: William from RuPaul’s Drag Race – Drag Race's Willam comes to SXSW for a dragtastic good time. Big Dipper DJs, with additional performances by TT The Artist, Will Sheridan, Abdu Ali, Louisianna Purchase, and more! Sabel Scities hosts, but ya gotta be 18 or old to ride this pony. 7pm. Rain on 4th.

SXSW She Shreds X Punctum Records – She shreds sea shells on the sea shore. Except these grrrls are shredding on guitars not seascapes. See Facebook for daily lineups. Sponsored by Adelbert's Brewery. Thursday, Friday, Saturday and Sunday. Studium,

Y’all Or Nothing Presented by Stargayzer, Young Creature, Mouthfeel – Y'all or Nothing returns with Big Dipper, F Virtue, Witch Hazel, Fee Lion, and Cap'n Tits queering SXSW to the Nth degree. 8pm. Rain on 4th, Free for 21+. 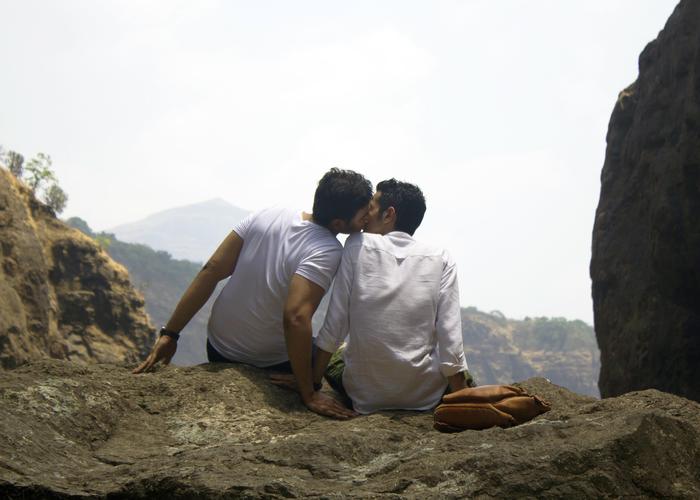 Deep Inside: Official SXSW Showcase – DJs Mouthfeel and Dylan Reese bring the return of the rush with visuals to blow yer mind by La Roncha. Cyra hosts and look for Pleasure Escape, Ariel Zetina, and Javi to be playing with tempo too. 8pm-2am. The Iron Bear.

Field Daze: Unofficial SXSW Showcase – Drop it down and wrap it up. SX that is, with good bands, a chill mood, and free Austin Beerworks. See Facebook for the lineup. 11am.

Lesbian Wedding SXSW Edition – Instead of mourning the death of GayBiGayGay, Hazey and Beth invite you to say I do to Lesbian Wedding. Performers TBD, but this party is always 100%. 2pm. The Sahara Lounge, Free.