Not Up for Debate 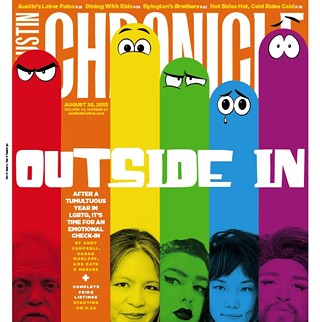 In the interest of presenting the full spectrum of feels in the conversations we had with some of our cover queers this issue, we will be presenting fuller versions of some transcripts. This is first of two posts featuring the interview with Morgan Robyn Collado.

We met with Collado at Epoch Coffee on North Loop. Our conversation lasted about 30 minutes.

Austin Chronicle: Let's talk archives and source material. One of the ways you identify is as a poet, and I’m wondering what’s your genesis as a poet? Who did you read?

Morgan Robyn Collado: When I was in college, I helped organize an open mic in Boston called “Transcriptions.” I would write poetry to perform there, because we had to fill the slots. It wasn’t until I was a senior in college, and I read Warrior Poet: A Biography of Audre Lorde by Alexis De Veaux, and that book changed my life. I know Audre Lorde’s story is not my story – because I’m not a black woman – but a lot of it deeply touched me. I’m really indebted to Lorde’s work, it inspired me to write often and to identify as a poet.

AC: Was it a particular aspect of Lorde’s biography that you connected with, or the holistic story?

MRC: Just the whole story. Damn. The ways in which she approached poetry, as a way to write our own narratives and visions for the future, was really important to me. I was in Boston, and I hated living there. I was miserable and wanted to leave.

AC: What was it about Boston?

MRC: [sighs] I grew up there. But the city is just trash. It’s a lot of really racist white people who think their shit doesn’t stink. Kind of like Austin, actually. I just didn’t want to be there, but I was finishing school. My partner at the time sent me De Veaux’s book, and he encouraged me to write poetry to help me survive. Poetry is what got me through that time, and still helps me get through. Poetry is surviving.

AC: Was it straight from Boston to Austin? What was the process of finding community here?

MRC: I started writing and putting myself out there on the Internet, going to parties, meeting people. That happened organically. I’m coming to this point where a lot of my friends are leaving now …

AC: Are you feeling that itch, too?

MRC: Yes! It’s been five years now. I feel that my time in Austin is coming to a close. I think I’ll be here for another year or two, but yeah.

AC: You mentioned being online and forming online communities, and to me one of the most notable things about you is the dedicated following you have on your Tumblr. I’m wondering how you built that up?

MRC: To be honest, I just started to talk shit on the Internet. I had a lot of feelings, a lot of thoughts, and I started to put them online. People — some people, not everyone — some people found what I had to say important. It’s not something I did intentionally, but I felt I had to express myself.

AC: I get the sense you see this as a political activity?

AC: Do you feel that’s misunderstood? Why is it that “talking shit on the Internet” is not just negative or trolling?

MRC: I’ve had lots of people get in touch with me, or message me, about how my work has really changed how they perceive the worl, or how my writing has validated other people’s experiences, and that’s really cool. But yeah, a lot of people talk shit about how Internet activism is not real. A lot of that is rooted in ideas of what activism looks like. Which is oftentimes very ableist — I don’t often have the energy to go to a rally, or to some of the spaces where demonstrations are held. Those spaces have become increasingly unsafe for me because I’ve called people out on their shit. That’s not the work I want to do. Direct actions are very important. But also, let’s remember: diversity of tactics. So talking about things on the Internet is part of that. Marginalized people have taken these technologies and used them in ways that the creators of these technologies never intended. I don’t think the creators of Twitter expected it to become an organizing tool. I think all movements take the tools they have in the moment and figure out how to do what they need to do. And the folks in power are going to do everything within their power to invalidate that.

AC: How do you conceive of your online self and your in-the-streets self – do you use different approaches?

MRC: It’s all connected. Audre Lorde said, “We do not live single-issue lives.” You know, #BlackLivesMatter is absolutely queer and trans — it should be. And again, I’m not black, so I shouldn’t have a say in what they do and what issues they organize around. It should look like however black folks want it to look like. But also, many times I’ve had white gay men tell me that trans issues are not gay issues. So, fuck off, and that isn’t true because homophobia is connected to transmisogyny. I mean, Stonewall … Sylvia Rivera.

AC: This is not a recent fad, as though trans people are only now becoming visible to themselves, but rather is it that the broader world is just seeing trans people for the first time?

MRC: And lots of folks can choose not to see that. Or can choose to only see Laverne Cox and Janet Mock, and not the black trans women who are being murdered. People can see what they want to see, and if you’re not seeing it, it’s because you’re not paying attention. Social media and the Internet has facilitated this, people can be more visible. But that visibility comes with a danger, because even now the state is tracking on social media. It’s a double-edged sword. And, still, regardless of how vocal and visible we are, if you’re in a position of power you can choose to ignore it.

AC: One of the most interesting and contentious aspects of your online personality which is your penchant for dismissal. What is that as a strategy? How does it link up to everything we’ve been talking about thusfar? Is there a political reality that this is based in?

MRC: I’m not going to argue with anyone about my community. That’s not up for debate. And if you don’t see me as a human I’m not going to waste my time on you. Because again, if you’re in a position of power (if you’re not a trans woman) – it doesn’t matter what I say, if you don’t want to listen, you’re not going to listen. I have been nice, I’ve been really sweet. And there have been times when I’ve done a lot of work, trying to really sit down and explain things. And still: people are like “I don’t get it. I don’t care.” The idea of, “You need to be polite, you need to educate,” is a tool that people in power use to perpetrate violence against folks who are marginalized. So, yeah, I don’t have time for that. And I’m more concerned about building community with folks who like me and have my back than some rando on the Internet. I don’t give a fuck about that, I don’t give a fuck about them. For me that’s another strategy for survival, because I can spend my whole life breaking my back struggling over people’s ignorance, and I’m not going to do that.

AC: Saying “I don’t have time for you,” seems to me to be a signal to someone else: This is the value I put on myself and my conversations and if you want to join me on this side of things…

Check back soon for Part 2 of our conversation with Morgan Robyn Collado as well as other interviews in the Gay Place.