Turning heads, shaking hips, and living up to the name of their 2010 single, “Amazing,” quality queer duo Hi Fashion – aka Jen DM and Rick Gradone – is one part talent, one part camp, and a whole lot of electro-pop to keep fans dancing all night long.

The LA band returns to Austin this Friday for a party that’ll hype you higher than cold-brew and tequila. But what makes Jen and Rick tick? And why are they absolutely smitten with Austin? (Hint: It's delicious…) 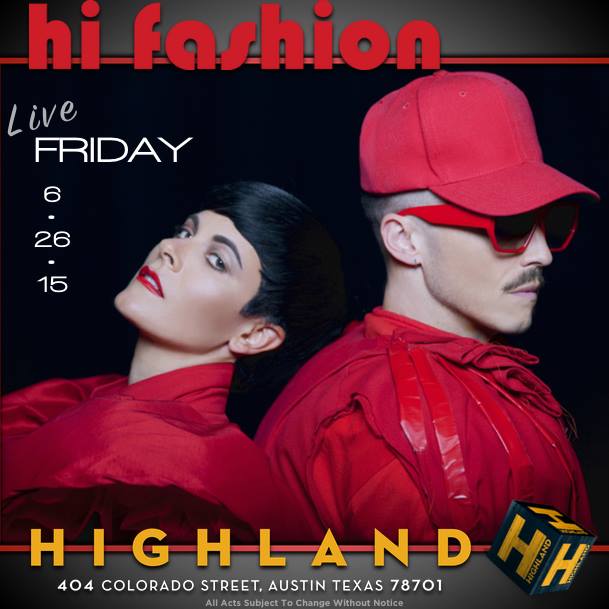 Rick Gradone: As the story goes, we met in a NYC bar, and I thought Jen was a guy and tried to pick her up. That didn’t work for obvious reasons, but a friendship developed. Years later Jen was doing a benefit night and she asked me to be a part of it. When I saw her perform, the idea immediately came to me to do a project with her so I asked her. She said no. Undaunted, I sent her three tracks I had written, one of which was the basis of “Amazing.” We’ve worked together ever since.

AC: You performed in Austin for Pride 2013 and Stargayzer 2014. What sets Austin shows apart from other cities?

RG: The way the music spills out into the streets makes this city so special. It's everywhere. All kinds. And the sexy people help that situation, too. The amazing mix of Texas and hipster is so unique to this town.

Jen DM: When we came back last year for the Stargayzer Music Festival it was a blast. Any reason to come back to Austin is a good reason – plus it’s teeming with music history that’s palpable each time we return. Totally inspiring!

AC: What's the first thing you'll eat when you arrive in ATX?

RG: Mexican food! We get real protective of our style in Southern California of course, but I love Tex-Mex just as much. If there could be hot queso in my hotel room when I arrive, I would be real happy.

AC: Are you playing any Pride Fests this year?

RG: We love playing Prides and we always do; this year for us will be Hamburg Pride in Germany – which we will play after the Yo! Sissy Festival in Berlin. We've never been to Germany, so we’re crazy excited about that.

JDM: We’d play Austin Pride again in a heartbeat. We just had the pleasure of performing at Portland Pride, and they are definitely another city that gets us. Bless them.

AC: “Amazing” was used in RuPaul’s Drag Race. How did that feel?

RG: It was such a huge honor! And when we saw the promos, which basically felt like a music video for the song, we lost our minds. It was so incredible. They were so great about crediting us, and all that, too. A lot of the drag stars from that show have performed our music, and it always makes us ecstatic to know it is loved. Having a drag queen perform your song is the highest honor. They put so much time and energy and love into their interpretation, and it means they really care about it.

JDM: Also having our song used on RPDR really spread our music much further than we could on our own. We are so grateful to have ridden the RPDR wave for that. Plus, we passed the Queen test.

AC: How has being queer affected your music and your fashion?

RG: It has everything to do with it. It’s so much a part of our sensibility, sense of humor, and the way we express ourselves. In terms of fashion, we both always have been interested in crossing the gender lines with clothing, and that has informed so much of what we do in our regular lives and as performers.

JDM: Being queer is our culture. It’s in our DNA. I don’t think there’s any other way we could approach this project. It factors into so many of our lyric decisions. And in terms of our fashion, sometimes the best thing to do is to be a walking poster child for queerness. What a relief that is.

RG: Divine in Polyester. Or Charro. It's a toss up.

JDM: I think of Grace Jones and haute couture camp. For me, she holds the torch. And Miss Piggy.

AC: As a group that's on the path to become queer icons, who are your icons?

RG: Leigh Bowery for me. His punk approach to drag/performance blended music, fashion, chaos, movement, art, and camp all into one amazing persona. Experiencing him changed my whole idea about those things. And then I will say Bronski Beat for representing powerful gay music in a totally new way, Alexander McQueen for creating fantasy and spectacle out of clothing, and John Waters for making the most insane movies ever.

AC: When can we expect a new LP or EP from you?

RG: At the moment, we are committed to doing singles with videos, so we can regularly release things, but we have enough for either. Maybe next year??