These are the people in our gayborhood: Class act 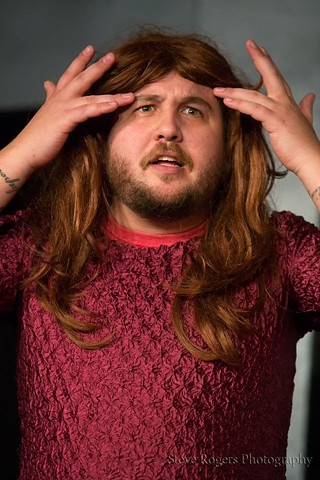 Micheal Foulk always knew he was destined for a life in the spotlight. “I’m a performer. I kind of have to be on stage.” After touring the country with his scream-metal band, Widows & Orphans, Foulk traded in the eyeliner and lip ring six years ago when a friend encouraged him to start taking classes at Austin’s improv, sketch, and stand-up theater, The New Movement. Nowadays, Foulk teaches improv and runs a weekly sketch show called Bad Example.

In an attempt to blend some Austin queerness into the city’s rich comedy scene, Foulk, alongside fellow farceur Ralphie Hardesty, also co-hosts Greetings, From Queer Mountain – a monthly storytelling anthology as told through the voices of LGBTQIA locals. Hosted by Cheer Up Charlies, the show’s repertoire focuses on the sincere and often comical experiences of being queer in a hetero world.

Referring to his work as “a labor of love,” Foulk recognizes that there’s no money in funny. But he loves what he does: “There is pretty much an infinite amount of room to do something if you put the work into it.” This year he hopes to begin working on his first short film.

Inside Scoop: Originally from Round Rock, Foulk tell us that as a kid, he and his mom shared a taste for the theatrics, particularly horror – from Hellraiser to Nightbreed. Foulk explains how he enjoys the subtle gay undertones that Clive Barker’s films embody: “I love those sorts of allegorical things that people have done, especially in the Eighties. There are so many great stories during that time that kind of talk about the plight of HIV+ people or just queer people in general.”

For more laughs, follow Foulk on Twitter @MichealFoulk or @Queer_Mountain, and be sure to come out and celebrate the second anniversary of Greetings, From Queer Mountain at Cheer Up Charlies, April 29.