These are the people in our gayborhood: Social Services Stud 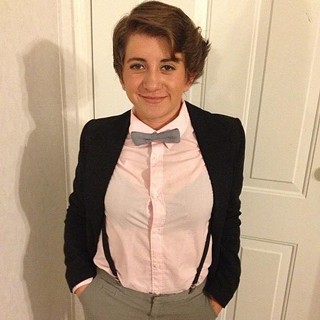 Name: Lex Keaton
Status: Arkansas transplant
ID: Lesbian
Queerly Quotable: “My goal is to accept the new things that I learn about myself every day and embrace them.”

Working at the ARCH – Austin Resource Center for the Homeless as a client service specialist, Lex Keaton helps "clients connect to resources” – from obtaining an ID or birth certificate to ensuring that appropriate provisions, such as shelter, are provided for those in need. This can be a daunting position for anyone, and Keaton admits, “There are a lot of things that are hard about working there.”

One of the hardest things, she says, is seeing other members of the LGBTQ community struggling with sexuality. “Coming out is scary if you’re on the streets. Hatred can come from anywhere,” she says. Nevertheless, Keaton wants to let her clients know that they aren't alone in their struggle.

Keaton moved here at the age of 20 with prospects of becoming a teacher, something she was told she couldn’t be. Determined to overcome the stigma that she, an out lesbian would never teach, Keaton happily reports, “My first job here was at KIPP Austin Public Schools, where about 75% of the staff was queer, including our principal." Moreover, she says, it was pretty neat to see right off the bat what Austin had to offer: "allowing people to be 100% them[selves].”

In the next five years she hopes to still be in Austin, studying American Sign Language and hiking the greenbelt with her lab/heeler Oxford, “even when it’s 100 degrees. Sometimes.”

Inside Scoop: Keaton's spirit animal is a turtle, in that she emulates the same “cool, calm, and collected” disposition and, she adds, because “I feel like I can kind of relate to them. I have a brittle bone disease, and they’re like squishy on the inside and hard on the outside.”