Out of Business and Up in Smoke

In a shocking double-whammy kick to the head, two of Austin’s frequented gay clubs go out quicker than a lit cigarette doused in a pint of lager. 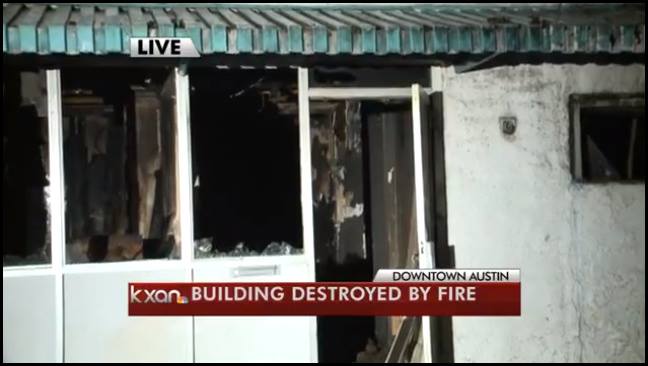 Last night before 10:30pm, firefighters were called to 502 Willow, where the iconic Chain Drive had previously been located for approximately 25 years. Having since relocated, the building had been left vacant for a period of nine months. By the time firefighters made it to the scene, the roof had already caved in, causing officials to work along the perimeter of the building to extinguish the blaze. According to KXAN, “three separate occupancy spaces” were located within the vacant building, fortunately, no one was harmed as a result of the fire.

In an interview, longtime Chain Drive bartender Mike Horton, Horton says it’s suspected that the building had recently been taken up by homeless individuals in the area. No cause for the fire has yet revealed any new information, however, Horton asserts that the building has been without power for several months. Patrons of the old and new club alike have expressed the irony of having recently been pushed out of their longstanding home to make way for the recent Waller Creek Conservancy program. Overall, Facebook comments from patrons have concurred with Horton’s statement, “I can’t think of a more fitting way for the building to go – one final flame out.”

In other news, ENVY NightClub has closed up shop with less than two days away from hosting the now-cancelled SXSW Interactive Kickoff. According to one anonymous source connected to the club, the club had recently lost their liquor license forcing them to temporarily suspend their business. Furthermore, this claim has been confirmed through the TABC. Gay Place will keep you updated on any additional news regarding the club's sudden closure.