Our road trip/conversation with Wendy Colonna continues: A few weeks ago, as she and I each headed to separate gigs in Houston, we plugged in our blue teeth and commenced to chatting.

In Part 1, we mostly talked about a song she penned called, "My Southwest Louisiana Home," for a tourism campaign for her hometown, by the Lake Charles/SW Louisiana CVB. (We also talked about kolaches.) But 2014 had been busy before the Lake Charles gig. A big break came when her relationship with Chicago song licensing firm, Music Dealers, hit pay dirt with an offer from a very, very formidable client.

If you've been in a mainstream movie theater or watched TV within the last few months, you've probably heard the catchy ditty.

The song's so catchy, there's already an adorably warm fanboy cover of it on YouTube. The ditty, written by Colonna, is called "Happy Song" and has been garnering attention from industry folks as well as earning newfound fans. Rights to the song were purchased for use in an ad called "Building" for the Coca-Cola Company.

The Austin Chronicle: So, Music Dealers had scored the Coke commercial deal before you got the Lake Charles offer, right?

Wendy Colonna: Yes, basically, Music Dealers called and said, "We need you to sign a non-disclosure agreement." [Laughs]. They sent me an explanation of what was needed. I had exactly a 30-minute window to write and send a demo of a song.

WC: Right! I thought, "What am I doing?! I've got to boil this down to a 30-second sound bite." But I was game. In 30 minutes, the first draft was in the bag, sent it to him: Me and my ukelele singing into the little mic on my Mac.

AC: That must have been maddening.

WC: And I couldn't tell anybody, because I signed the NDA. I've learned when it comes to big ad firms and clients, you have to let go of any expectations, because you can go bonkers. Basically, I was sitting on this egg, and I didn't know if was going to hatch or not.

AC: But then things started to happen…

WC: I found out it was a go in mid-March. Then I got mentioned in the Wall Street Journal South by Southwest picks, and I thought, "Whoa! Things are happening!" The ad started airing on Memorial Day weekend. I remember getting phone calls and text and Facebook messages from people saying OH MY GOD!!!

AC: Did you get any pushback or criticism from anyone?

WC: I thought maybe I'd get some criticism – I generally don't write things that sweet. But you know what? I was so nervous, and the world was so kind. That taught me a lot.

WC: I have a friend who had a miracle baby at 40. She told me she sang that song to her baby in the womb. [Laughs]. Then I got a little video on the day he was born of her singing that song. I was sitting there, just weeping in the studio. So, no, I'd say I've gotten the opposite.

AC: Well, 40-50 years later, no one seems too concerned about the Supremes, or the Beach Boys, or Nancy Sinatra, or the Who… There's a lot of nostalgia wrapped up in those ads. They represented their times well.

WC: Television, games, movies… they may want these familiar hit songs, but they're real expensive to license. Music Dealers built a business around the idea that there is this surplus of artists out there with great music. "What if we created a way to connect them with what they're looking for?"

AC: How did this deal shake out for you?

WC: Basically, before the deal, I could afford to make a whole record, but not pay for a PR campaign. Then: "Oh. look! This is the exact amount you spent on PR!" This is the universe saying: "Congratulations on your risk! It was the right choice; here's your reward."

Look, I'll be honest, I don't drink a lot of Coke. But, it's the most recognized brand in the world. What an honor. Me, a little bitty independent artist, got to do something on that scale.

AC: Well, they get to have the cachet associated with your song.

WC: Songwriting is songwriting. At the end of the day, [taking the Coke gig] helped put out a new record. What a blessing. You can't take that gamble going gig to gig.

The bottom fell out of the music business. What's a musician to do? They can go clean houses; they can go use their talent to teach in a church. I've taken every music job there is, and I think there's dignity in being open to the creative process however it shows up in your life. Anyway, where's the dignity in not owning your masters?

AC: Right. I guess I'm often baffled by the idea that working on commercials is selling out, but signing your life away to a monstrous label isn't. Not that labels, per se, even exist as they did. I used to run a tiny label. Even on the indie side, it's pretty gross. There's no purity if you want to make it your living.

WC: Also, what I didn't know was that like any actor, you get royalties. I get paid royalties for the song.

WC: So many artists are nervous to talk about money. Conversations are not being had about the value of music. Poverty is not sexy after a certain point. I'd like to think that all the sacrifice of being on the road for weeks at a time, not seeing my family for holidays, that someday I can have a roof over my head or have a child or something.

I was asked to be on a panel at SXSW about this very topic.

AC: It's a real game of balance, wouldn't you say?

WC: At the end of the day, I'm not going to work on something if I don't think I can play my heart out. Once I saw that video, I really believed that I could do something touching with it. That's how it is with life, right? You have to keep showing up to do the work, and you have to let go of the attachments to the outbound, because some other thing will sideswipe what you thought was the big thing. And there'll be an opportunity and it's a blessing and it's something you didn't work toward or ask for specifically but there it is and it's OK.

AC: Not unlike the Lake Charles video, too?

WC: It's so funny: Angie Manning at the tourist bureau called me up to do it and didn't even know about the Coke thing. She had no idea.

AC: I've always thought it was like a beach-culture melding of New Orleans with Cajun country – roux, gumbo analogies, all that.

WC: Clifton Chenier! Boozoo [Chavis]! This is Doug Kershaw Country! They all came from there. That's a long line to be proud to be a part of.

AC: Some crazy shoes to fill when you put it that way. What happened after you accepted? What was the process?

WC: I have a lot of songs about Louisiana. First I sent them samples of other people's work, other people's songs, and would ask, "Do you want it more Cajun? More zydeco?" So we could home in on the right flavor. On the flight back from the Americana conference [in Nashville in September], I wrote down a big fat list of all the things that I felt like were important to include about Lake Charles."

AC: Did that include a wish list of who you wanted on it?

WC: I usually hire producers for my work, but this time, I got to be the producer of the project," she says. "I brought in some musicians I worked with on my first record in 1990 and some new ones like Joel Savoy [son of Marc and Ann, and lifelong member of the Savoy Family Cajun Band]. We're cousins.

AC: Is it impolite to say "Everyone's cousins" over there?

WC: (laughter) Another coincidence is where we laid tracks, EMF Studios. Edwin M. Fruge. Lake Charles Music. The studio we recorded in was the same studio where my first high school rock & roll band recorded. It's a strange little circle. I came all the way back.

AC: You mentioned Doug Kershaw. Ever worked with him?

WC: No, I haven't, but it's on my bucket list. I haven't done the how-many-degrees-of-separation inquiry yet. (laughter) I have a feeling it'll be, like, one or maybe two. He grew up in the area where my family's farm is but on a houseboat, near the cove where my grandparents live.

AC: What's the dirtiest way your voice has ever been described?

WC: [A very dirty, very low laugh begins.] A woman come up to me at a show, and she said, "Your voice sounds the way sex –––––––" [She goes off the record and implores me to not print the word. I agree. It's dirty.] I guess that's a compliment.

When I was a kid, I saw Who Framed Roger Rabbit?, and I heard Kathleen Turner doing Jessica Rabbit, and I thought, OMG, I want to sound like that! (laughter) I did not know that in my mature years that I would have to answer questions like this.

But, yeah, that's the dirtiest.

WC: (pauses) I've never gone to New Orleans for Mardi Gras. I'm a little agoraphobic, and the idea of somebody, anybody, at any given time projectile vomiting onto me is not my idea of fun. I don't do well in crowds. I'm on the other side of the mic for a reason.

AC: The wild road-dogger is a little agoraphobic! (laughter)

AC: I think you might like the walking parades in the Marigny or in the Garden District. Lots of artists, glam, DIY costumes, participant parades.

WC: Yeah, I'd be into that! I think that my main issue is I can't do that crazy-tourist-debauchery-insanity thing.

AC: But you've been to Mardi Gras, right? Just not in New Orleans?

WC: Oh, yeah! I grew up with Mardi Gras in Lake Charles. It's manageable; it's fun. If I didn't always have to work, I'd do it more. I've done Lafayette Mardi Gras. I love that. I think I'd spend more time around Acadiana, because I really love all the traditions and the different costumes. It's a whole different world from any other Mardi Gras, and it's really beautiful. 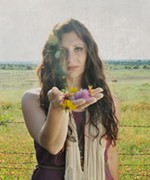 Mardi Gras 2015: Wendy Colonna to Home and Back, Pt.1
Austinite/SWLA-native proves you can go home again – and sing about it 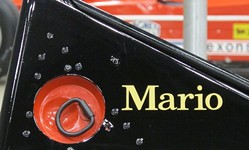