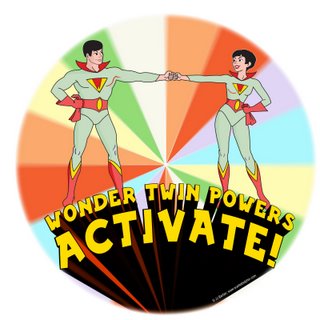 The ultimate fist bump of solidarity

After the standing-room-only meeting this past Monday, the proposal to paint crosswalks at two Fourth Street intersections rests in the hands of the Austin Arts Commission. A web portal for public input remains open at SpeakupAustin! through Sunday night at midnight.

The commission votes at their next meeting, Mon., Nov. 17.

The Gay Place's daily news "AggreGAYtor," David Estlund first wrote about the crosswalks back in September, then provided a few updates to the story, including news of city council's endorsement.

Your friendly neighborhood Gay Place remains baffled – not only at the logic-skew thrown up against these colorful pathways, but also at a packed house that could only muster a few speakers to contextualize why this is so important to many people. The meeting was, we reiterate, standing-room-only, but basically Austin Pride's Paul Huddleston, the original proposer of this project, was left out dangling on his lonesome to defend the idea himself.

A rendering of the proposed rainbow crosswalks

Pull up a chair. We'd like to tell you a li'l story (and now we careen into first-person-hood):

Back in the mid-2000s, deep in the Bush-era, I accosted Ed-in-chief Louis Black at the Chronicle mailboxes. I explained that anytime I go out of town, out of the comfortable, affirming confines of gay-friendly Austin, the quest for places that are Austin-like and gay-accepting is challenging. Finding the places where (and I cannot emphasize enough the complete lack of hyperbole in this next statement:) I would least likely encounter violence against whom I am is constantly on my mind when I travel. The most likely place to find safe places, I said, was gay media. But without knowing where to find gay media, the next best place was the gay bar. How to find one without the other presented yet another challenge. So I shared with my boss this secret: Gay bars often place ads in alternative newsweeklies.

He had an idea where I was headed, presumably. Then came the pitch: Louis, I reasoned, I already get handed so much gay subject matter at this paper. Why not consolidate this information and present it as a service to readers, especially as a beacon to out-of-towners who do not fully understand the extent of Austin's open arms? Why don't we, I suggested, roll out the rainbow welcome mat? Sure, I concurred, the Chronicle is clearly gay-affirming, but this was an opportunity to emphatically communicate to visitors and new residents, Austin's support and care for LGBTQ.

The Gay Place, as a column (cheekily named in homage to that cool book not about gay people, per se…) exists for these reasons.

So, at this point, dear reader, you presumably have an idea where I'm headed with this.

Amidst the obfuscation of rainbow crosswalk-naysayers, amidst cries of rainbow crosswalks being:
1) a danger (Prove this, please?) or
2) a distraction (Let's go ahead and paint over that pesky "I love you so much" time-waster while we're at it, shall we?),
3) a cultural divider (Clearly the multi-hued symbolism of the rainbow implying the hope/potential of many different peoples standing together, sided-by-side is lost on some people…), or
4) taxes!!!!! (Austin Pride will fund, manifest, and maintain most of this project.),
we couldn't shake one sad thought: Maybe the notion that these rainbows specifically represent open-armed welcome mats to LGBT from places like Vidor or Waco or Midland or New Braunfels or wherever, coming to Austin seeking kindred – is exactly what some folks do not want?

If you know recent Austin downtown history, you know what made the Warehouse District a viable and safe place for business and leisure in the first place. (Just ask how long OilCan Harry's has been there and how many gay bars have gravitated to that area for decades…). Is the status of the Fourth Street block between Colorado and Lavaca (the intersections in question) as the main threshold of Austin's annual Pride Parade an issue? Gosh, we sure hope not.

Oh, let's give the naysayers the benefit of the doubt: Perhaps the Barbara Jordan statue at the airport also confuses some people into thinking that they are not welcome in Austin, Texas. The large, steel Cesar Chavez silhouette at the library on the street named for him must be so disconcerting as well. Do German flags at Wurstfest freak them out? Or Mexican flags hung in bars during Cinco de Mayo or (more fittingly) Dieciséis de Septiembre?

Please, let's not mince: If you are sad when the naysayers drown out the project, get online and don't leave Paul Huddleston to shoulder this whole thing on his own. Surely, between allies, art lovers, rainbow brites, unicorns, LGBTers, and just plain fairness-and-justice supporters, there is support out there not being heard?

There are a few days left to SpeakupAustin! The commission meets Monday, and you have until Sunday night at midnight to voice your support.