Bar owners sound off on crosswalks during Arts Commission meeting

Rendering of the proposed rainbow crosswalks on Bettie Naylor Street

The proposal to install rainbow colored crosswalks on Bettie Naylor Street at the Lavaca and Colorado intersections entered one of its final stages – but not without some friction from local business owners.

Passed by City Council on Sept. 25, the plan would cement the area as a historic Austin “gayborhood” and showcase the City’s support for the LGBTQ community, mirroring rainbow crosswalks in San Francisco, Toronto, and Vancouver. (See: "What's a Little Rainbow Crosswalk Between Friends?" Sept. 18, for more.) After Council’s approval, the idea moves to the Austin Arts Commission, which will review the artwork donation proposal, submitted through the Austin Gay and Lesbian Pride Foundation with private dollars.

While the gay-friendly plan received pushback from some businesses in the community, including Péché and Truluck’s, those owners have since dialed back their criticism. However, during the Commission’s Monday afternoon specially called meeting aimed at gathering public input before a final decision, it was clear heated opposition persists from bar owners.

Oddly, despite the standing-room crowd clustered in the city of Austin meeting room on East Second Street, only five citizens signed up to share their opinion – and three of those five were vocally against the crosswalk plan. Following a brief presentation on the timeline review process from Maggie Stenz, collection manager with the city’s Art in Public Places and a presentation by Austin Pride President Paul Huddleston, the Commission opened the floor for a (surprisingly short) citizen comment period.

John Korioth and Chris Ruhling, owners of Hangar Lounge, both shared their discomfort with the plan. Ruhling, pointing to national flags of Germany and France, argued the rainbow-painted crosswalks similarly amount to a flag, not a piece of “original artwork,” and requested the Pride Foundation resubmit a “more appropriate piece of artwork,” – one that “properly” highlights LGBTQ activist Naylor’s legacy.

Both Ruhling and Korioth contend they are fully supportive of LGBT rights. (As the son of two civil rights leaders, Korioth said, “It’s in my DNA to include equal rights for everyone”) but are concerned that the colorful addition to their area would hamper business. The Pride Foundation does not have a “vested interest” in the leased-out spaces, they both said. Putting his money where his mouth is, Korioth even wagered somewhat of a bet, offering up a $10,000 check to any organization the LGBTQ-right group chooses if his business sales increase after the implementation of the rainbow crosswalks – yet if the sales drop, he challenged the gay rights group to answer to the bar’s investors and employers. Korioth said when questions about financial impact arise they are met with “silence” from the other side.

Angie Hanna, a patron of the area bars for two decades, argued the crosswalks were “problematic and divisive.” Austin is the “last place” that needs to declare a gay district, said Hanna, who recently penned an open letter to Council on the issue. “What’s next, should we paint the Mexican flag at any crosswalk where three Mexican restaurants are on the same street?,” she asked. “Please don’t segregate the warehouse district into ‘gay’ and ‘straight’ just so we can copy what other cities did — they did it because they couldn’t accomplish what we already have in Austin,” said Hanna.

In response to the backlash vocalized at the meeting, Huddleston countered the anti-inclusion arguments: “I think the people who frequent the warehouse district and attend those businesses are quite aware that they are entering a very gay-friendly neighborhood and wouldn’t stop doing so because there’s paint on the street,” he told Newsdesk following the public hearing. Huddleston says not all businesses are hostile toward the idea – Fado Irish Pub, Halycon, Rain, Oilcan Harry's and Dick Clark, welcome the plan.

As for Korioth’s $10K wager, Huddleston said wryly: “I’m happy to take him up on it.”

The Arts Commission will factor in the stakeholder input and comments posted on SpeakupAustin! and take a vote on Nov. 17. The Commission is expected to submit recommendations on the crosswalks to council for action Nov. 20, and on the donation policy Dec. 11. 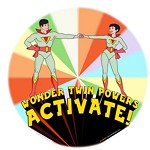 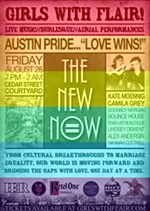