And since the Stillwell campaign ganked the photo of his District 6 rival from an interview I did with Flannigan back in 2009, it's fitting for the "Gay Place" to fill in some blanks, too.

Why would Stillwell think the out-of-context "news" that Flannigan was once ousted from the AGLCC would be valuable to a district known for conservative leanings?

"The flyer states, 'Flannigan was removed as the president of the [AGLCC] in 2009 with a vote of no confidence from the Board of Directors, resulting from his management of the Gay Pride Festival.' What the flyer fails to mention is that Flannigan was later reinstated, and served as president until recently. It's a pretty big omission, even in a flyer 'designed,' as Stillwell puts it, 'to make me look good.'" 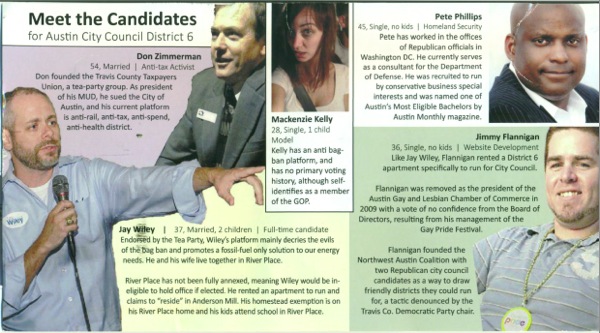 John Anderson's photo of Jimmy Flannigan (lower right corner) originally appeared in the Chronicle in 2009 and was, according to Anderson, used without permission.

The main distortion, of course, is the omission of the fact that Flannigan was reinstated to the AGLCC. In his first tenure as president (after a decade of volunteer service to the group), Flannigan presided over a period when the gay chamber's membership saw a rise to an all-time high of 325. In his two-and-a-half year absence, the regime that followed managed to drain the organization of its ability to pay 2010 Austin Pride debt and let the membership atrophy to a paltry 15 members. It wasn't until Flannigan was asked back onto the board that membership and coffers again began to grow.

"During Jimmy Flannigan's most recent tenure on the AGLCC board, from 2012 to 2014, membership rose from 15 to 350, AGLCC earned the 2013 Rising Star award from the National Gay & Lesbian Chamber of Commerce, and AGLCC named a leadership award after Jimmy. AGLCC owes a huge debt of gratitude to Jimmy for the years of work he put into helping build AGLCC into a stellar organization."

The "Gay Place" reported about the AGLCC awards in December, 2013:

"Current Vice President Amy Cook, Vice President Elect Edgar Gierbolini, and Membership Coordinator Ceci Gratias came together on stage to present a special award to Flannigan for his 'outstanding, fabulous achievement and devotion to AGLCC and service to the community.' Next year, it will be called 'The Jimmy Flannigan."'

The Chronicle is the one local news outlet which has continually covered the ongoing AGLCC story. Here are links to past reporting and commentary about Flannigan's ouster, related AGLCC schisms with respected activist Ceci Gratias and local musician Nakia, the AGLCC's ensuing years of decline, then Flannigan's reinstatement.

Do these inner dealings of a local LGBT organization really matter in a North Austin council race? Or is this just an expedient way to get the G-word front and center in a fairly conservative district? And from where did Matt Stillwell lift the specific wording "a vote of no confidence"? We have our suspicions, but to our knowledge it did not appear in any official reports and exists nowhere on the web.

As reported in today's "News Roundup," a number of local LGBT, allied, and Democratic Party players have commented on Stillwell's flyer. In a statement released over the weekend, Stonewall Democrats of Austin President Sarah Goodfriend issues the most direct and powerful sentiments:

"Once again, a candidate behind in endorsements, money, and community support attempts to denigrate his opponents through the use of incomplete and misleading information and to inflame prejudice based on differences in marital status, age, gender, family structure, and sexual orientation. This activity is all the more disappointing coming from a candidate who professes to support Democratic values.

Jimmy Flannigan has been a leader in bringing together the residents of District 6, regardless of their background, age, gender, marital status, sexual orientation, or political affiliation. Flannigan’s ability to unify and lead is exactly what our community needs as we address the challenges that face our city. The Austin Chronicle, the Austin American Statesman and over 20 community organizations have endorsed Jimmy Flannigan as the best choice for District 6.  We are proud to be among them.” 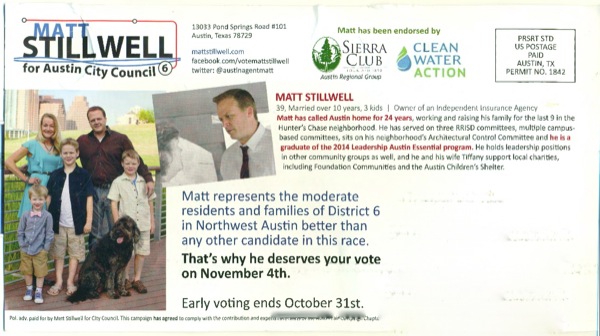 The other side of Matt

In a town with such a smart electorate, does playing the gay card at the last minute really work? Do bro tropes and anti-gay stoking implications work in Austin? Are whisper campaigns – albeit ham-fisted ones – still effective in local politics? Austin City Council candidate Matt Stillwell (and the rest of us) are about to find out.