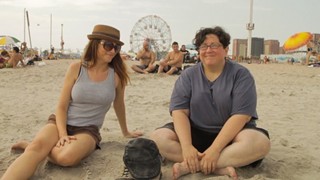 The Foxy Merkins, a quirky, lesbian comedy that premiered at the 2013 Sundance NEXT Weekend Festival and was an official selection at Sundance's 2014 fest, makes its way to Austin this Sunday.

Foxy tells the story of Margaret (Lisa Haas), a lesbian hooker-in-training, who is having some trouble in life. One day, Margaret meets Jo (Jackie Monahan), a gorgeous and confident woman, who just happens to be a lady pick-up artist extraordinaire – even though she considers herself to be hetero. They hit the town and encounter a number of eccentric characters. While navigating their journey together, the pair get a lot more then they bargained for.

Director Madeleine Olnek works with an ensemble cast. In Merkins, she uses many of the same actors from her previous feature, Codependent Lesbian Space Alien Seeks Same, including Alex Karpovsky of Girls fame. Codependent premiered at the 2011 Sundance Film Festival and played locally at the aGLIFF/Polari fest in 2012. Both lead actresses, Monahan and Haas, co-wrote the screenplay along with Olnek.

Cinema East has programmed a summer full of film festival breakouts and winners for their annual outdoor series. Foxy Merkins screens this Sunday, August 3, 9pm at the French Legation Museum. Admission is $3-5 sliding scale donation. As always, the event is BYOB, so bring a blanket and grab a cold one.

While there is no official trailer for Foxy, check out the video below for a quick clip and a few words from Olnek.