What do you get when you cross a SXSW party sponsored by Mike's Harder Lemonade and headlined by Brit pop star, Charli XCX? As the headliner on a night of lesser-known acts, Charli XCX took the Mohawk stage just after 10pm and just in time for the rain.

But that didn't stop the 90s-inspired singer from wearing her sunglasses at night and flipping her curls. And it definitely didn't stop the drunk-on-Mike's crowd from cheering, dancing, and jumping on stage. 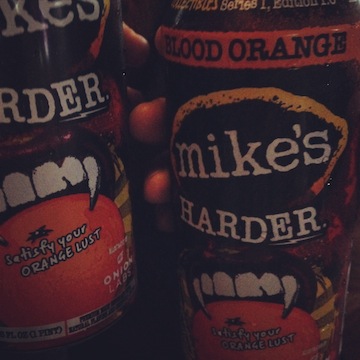 Not necessarily an endorsement… Just, you know, wanting you to see what we were getting ourselves into… (photo by Sarah Wassel)

After several songs Charli, backed by an all femme-band, broke into a cover of Bow Wow Wow's… I mean the Strangelove's 1965 hit "I Want Candy" (who knew that song was that old?!).

It seemed like pure fate that we, as an audience, would all be holding onto a can of Mike's Blood Orange (this stuff tastes like Red Bull meets cherry cough medicine), and singing along to "Candy on the beach, there's nothing better / But I like candy when it's wrapped in a sweater." A great show to kickoff the SXSW music portion, the night definitely touched upon the conference's sweet tooth.