Your AggreGAYtor strikes a pose beneath the pink ’chute

Originally a tiny trailer on the then vacant corner of Waller & E. Sixth, Cheer Up Charlie’s has since become an important hub for Austin’s queer and creative community. When proprietor Tamara Hoover then moved across the yard and took over the dive bar from which she’d been renting the trailer space, she didn’t know what to expect. “It was a gamble, but we had nothing to lose,” said Hoover.

Once the club established itself as a venue, it had the early indications of runaway success. Hoover's strong sense of curating, booking, and allowing lots of time and space to grow her wild plate of indie mish-mash resulted in a diversity of audiences that grew along with her connections to bands, artists, DJs, performance artists, and community groups. When partner Maggie Lea entered the picture, she brought along equally strong curating skills, deep knowledge of indie film and filmmakers, and her own keen sense of social networking. Add to all that the space itself, sprinkled with astroturf loungers and capped with a carpet-besampled stage, and the array of Best of Austin awards earned through the years make total sense. 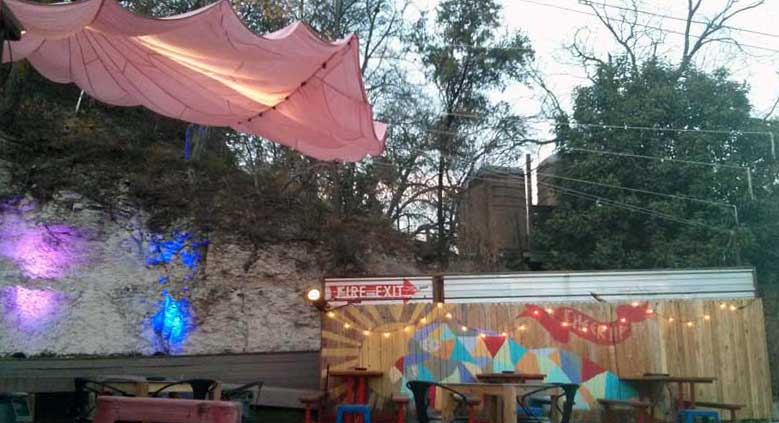 From the moment Cheer Up Charlie's opened at 1104 E. Sixth, however, there was a very real spectre of impermanence. The property owners had development dreams, and although the recession caused that deal to stall, their intentions remained clear. Nevertheless, when word came late last year that Cheer Up Charlie’s had less than a month to go, the community was stunned. It is in such moments of adversity, however, are opportunities for grace, and across Waller Creek shone a little ray of light. 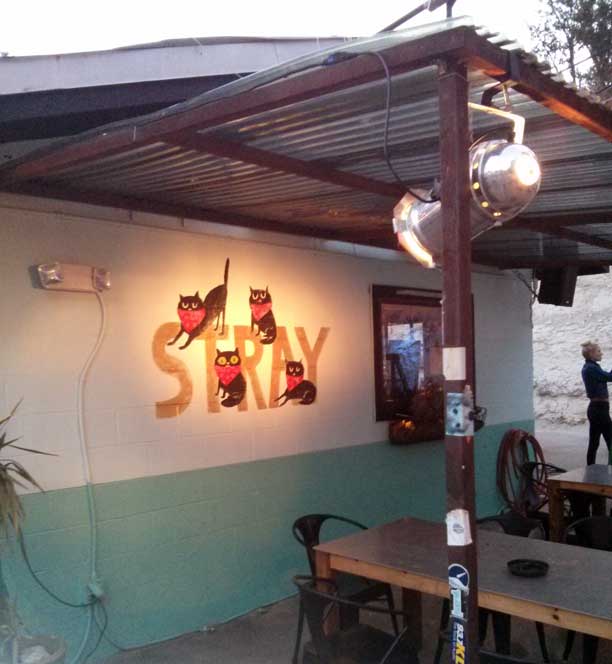 The bar formerly known as Club DeVille stood shuttered at Ninth & Red River, awaiting a tenant to give it new life and a little personality. Despite the occasionally amazing ¡Peligrosa! parties, the place was ready for an upgrade. Tamara and Maggie snapped up the opportunity and began work right away.

“The last month has been hell, but here we are. The toughest part was when we were working here all day and there all night,” said barman Bryan as he rushes across the patio carrying equipment.

“I used to come here before it was even Chances; it was already a gay bar,” said ebullient guest Santiago. Back then, “the neighborhood was really seedy, lots of prostitutes and junkies. It still is of course, but all that money makes it seem aboveboard. Austin Country was another gay bar right down the street, and the Chain Drive was originally in an alley around the corner.” 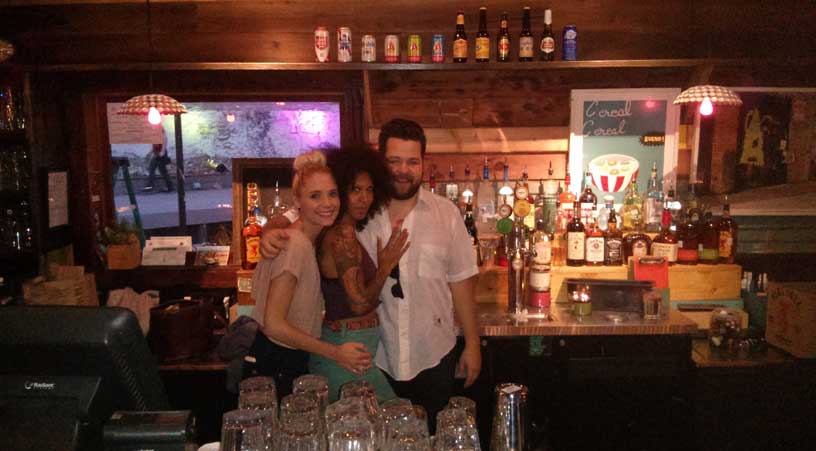 As the night wore on, people trickled in until there was a sea of familiar friends and fans. Hoover was delighted: “I feel amazing! It's been hard, but tonight, seeing everybody's faces, that's what we've been missing.” The queers, creatives, and misfits who populated those first dance parties at the Cheer Up's trailer crowded in, and the new space seemed to meet or exceed everyone’s expectations. The famous cat burglar mural, the astroturf, even the multicolored wall panels had made the transition. One standout addition is the new multicolored vintage wood floor, recovered from a middle school basketball court. 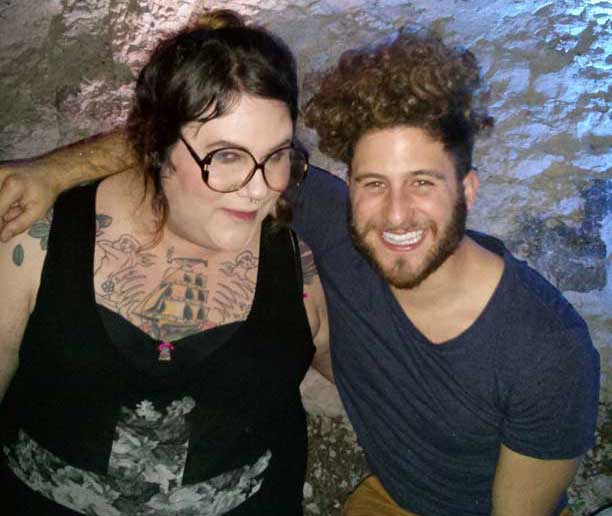 #imagineursula and her boi toi Bryan. And his fabulous hair. (photo by David Estlund)

The space itself has a bit of history to add a warm glow of nostalgia to all the bright, colorful cheer. Before it was DeVille, it was Chances, a lesbian bar that made history when it broke from the shadowy and sordid mold, opened its doors and windows, and invited all the world to join in.

Gretchen Phillips served up the tea: “I was right here when Chances opened in 1982 – against this wall right here, smoking a joint. It was kind of a lesbian bar, and back then there was no DJ culture, so there was a jukebox. Sometimes the original owner, Jill, would play the acoustic guitar and sing. Then it started becoming a live venue. Austin had three other lesbian bars at the time, which is amazing considering the city was so much smaller, and there aren't really any lesbian bars left. But Jill's music started attracting the more creative members in the community, who in turn started contributing a tremendous amount of creativity.

“One of the things that was really interesting about Chances was that it wasn't necessarily a lesbian space. We wanted a kind of lesbian centrality, starring everybody. Back in those days, things were so segregated, even with gays and lesbians, and Chances was such an awesome venue that straight bands wanted to play here. The lesbians would hang out with the straight guys, because obviously, they're all attracted to women. It was a big move forward towards a queer centrality where that one difference, the people who are different are not the only reason the space exists, but it's a safe space where everyone shares a common understanding. 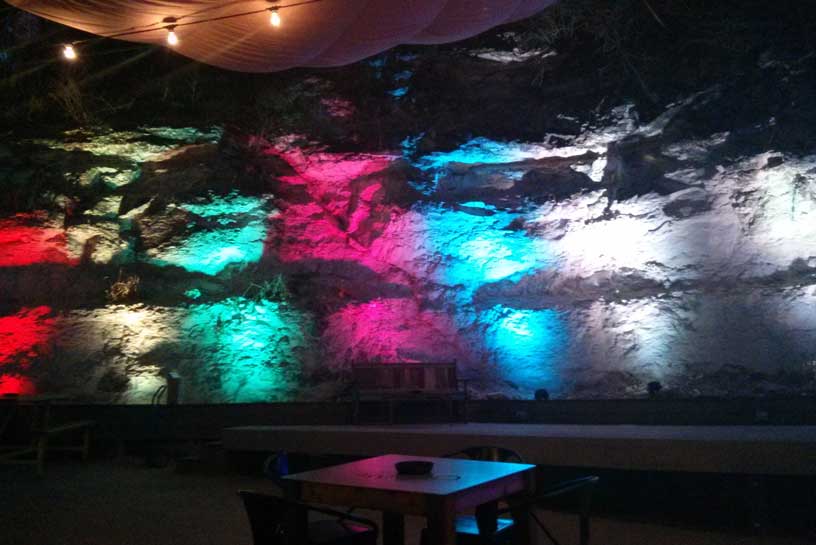 The stage where history was made 30 years ago. (photo by David Estlund)

“But remember, we're talking about AIDS, unbelievable gay-bashing… It was a different time. What I saw when I first went to Cheer Up Charlie's [a few years ago] was this beautiful baton being handed off. It was a place with a huge lesbian interest, but full of guys, mixing gay and straight, and however it happened, bringing it here into this space is very exciting to me. This is my dream. Every time I played inside the little cinderblock there, I was reminded of playing inside the little cinderblock here, so Tamara and Maggie are the only ones who could bring this place back to life.”

Cheer Up Charlie's is located at 900 Red River. The soft opening goes all week, with their grand opening weekend this Friday and Saturday, February 22 and 23. RSVP here. 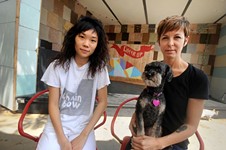 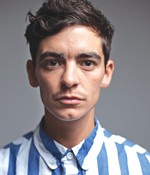 JD Samson & Saving the Noise
The girl from MEN is here to show you a good time.