Creating Change: Resting on Breasts and Peeing in Peace

Friday at the conference: Breastival Vestibule and bathroom salons

At some point in a conference with 4,000 brilliant queers, you have to lie down on the floor. I tried to describe this state to artist Rachael Shannon, and she said, "You're so inspired and so tired that you're insplitired." 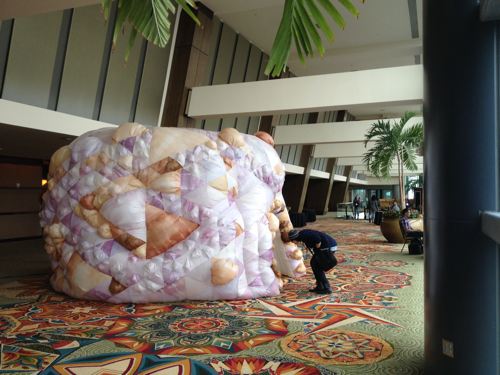 Peeking into the Breastival Vestibule (photo by Rachael Shannon)

Rachael is co-leading the Art Studio Space (ASS) at Creating Change, 2014, and has brought her trademark haven, an inflatable nylon den made of many fabric breast-shapes, upheld by air, and filled with pillows. It's a nap-space, a pause time, a refuge, and I went directly there. 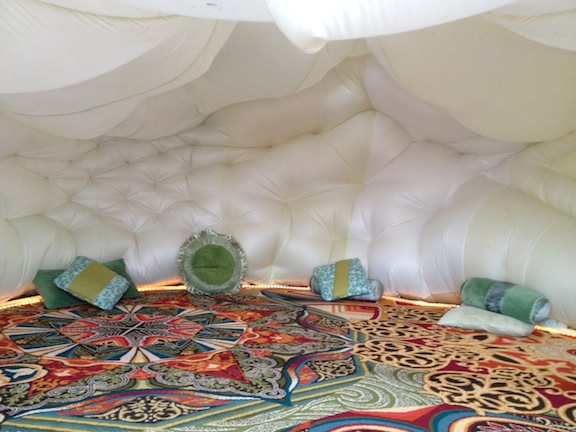 On the floor I found Omar Lopez-Jara, gay activist and HIV tester and educator from Austin. He was having some quiet time on the pillows, gazing up at the aperture in the top of the breastival. I joined him for silence, some spiritual conversation and some stretches. 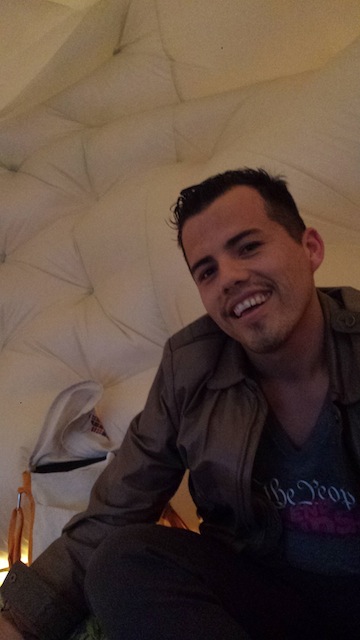 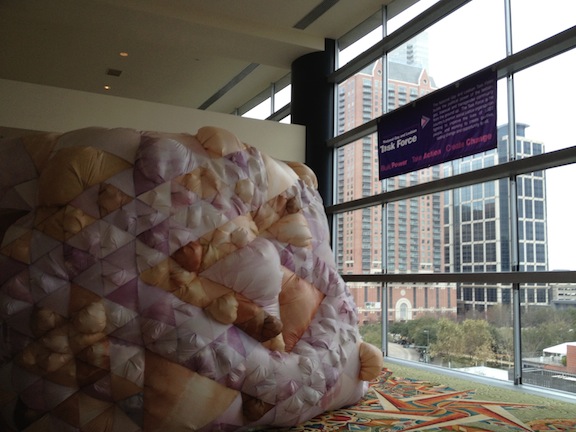 A lesbian feminist, I bask in the breast wherever possible. I try not to hurl myself toward the nearest one. But here, the breastival vestibule welcomes all who need nourishment and invites them to just to lay down on the carpet. Insplitired.

After an hour under the luminous pillowy embrace of the space, I needed a bathroom. The peeing experience at this conference is eye-opening. The Hilton's marble-tiled, brass-fixtured porcelain expanses have been transformed into gender-neutral bathrooms in the effort to end gender binaries and oppression/violence based on those boring categories.

I've been an advocate for schools to establish gender-neutral bathrooms for transgender students to use, but had never really been in a bustling one myself. I regularly storm into single-seat men's rooms whenever women's rooms are full, but never when the men's room can hold more than one pee-er at a time.

It was 5pm on a Friday afternoon. I checked my reflection and a queen behind me said, "Mmmhmm," directed at my knee high tan leather boots, I think. I washed my hands and saw, reflected in the mirror behind me, a line of brothers standing at the urinal. The melodious tinkle shocked, then warmed me. Someone giggled, and in a baritone someone else said, "All God's children." 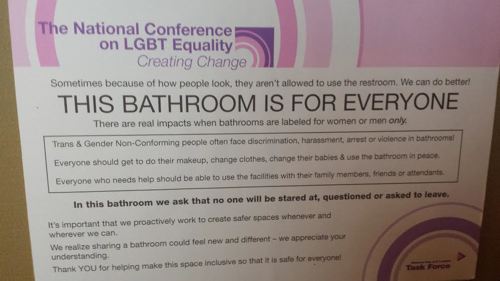 I suddenly realized I wasn't afraid of the male genitalia in the room. Here we are with human bodies! I never see people standing up to pee. It's cute. It was amazing to break down binary stereotypes in my own mind and see the dust fly. Some stand to pee, some sit down, some probably squat on the seat or do ballet. Regardless of our bodies or our pronouns, we're just sharing this space. 9 billion genders on earth. More bathrooms to go around.