Creating Change: "Take It In"

I’m at Creating Change, the National LGBT Equality Conference, swooning over 4,000 activist queers in one hotel in Houston. I'll be sending dispatches to the Chronicle through the weekend – follow along to enjoy this historic confab. 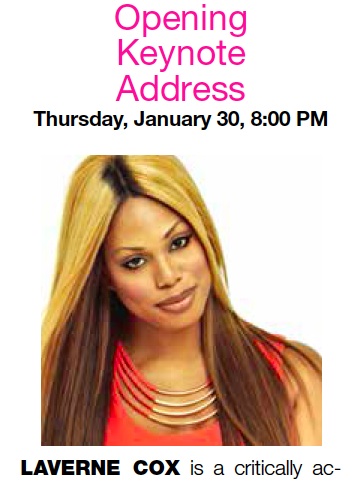 The Honorable Lesbian Mayor, Mrs. Annise Parker, welcomed the crowd to the city by lighting up City Hall in rainbow colors. She told us she loves us because we are her family, and reminded us that “Houston” was the first word spoken on the moon.

Kate Clinton emceed, a lot of people welcomed the crowd, and all of them were geniuses. But let's get right to Laverne Cox. She glided onstage in a tight orange dress the color of a prison jumpsuit, with shoulder straps made of silver seatbelts, her cascading hair parted in the middle, wearing fishnets and black patent leather heels.

It took the audience a few minutes to stop screaming and sit down.

Excerpts from her speech below, transcribed through tears.

Some days I wake up, and I am that black trans woman walking the street in NYC, and people are yelling, “That is a man!” And I’ve come to understand that when a trans woman is called a man, that is an act of violence.

Some days I wake up, and I am just a girl who wants to be loved. And I was with a man who said he loved me, but he could not appear in public with me….

Some days I wake up, and I don’t feel 'good enough,' because I’ve heard that over and over again. I’ve heard it from members of my own community, because I’m not passable enough. I should go get surgery for this and that and then I’ll be acceptable as this or that.

But. Then I think. I think we are resilient people. I think about so many people who’ve come before me who’ve made me being on this stage possible. People like Sylvia Rivera, Candace Cayne…. In the face of so much injustice, we are a resilient people, we are a fierce people. We are a beautiful people…

“Healthcare for trans people is a necessity. It is not elective, it is not cosmetic, it is lifesaving. But we are more than our bodies. The criminalization of trans people is so pervasive in this culture.”

Transwomen are criminalized, profiled, and arrested simply for having more than one condom in their purse. Or for wearing too short a skirt and going into the wrong place. The larger culture assumes that trans people are illegitimate, that we are fake.

Arizona criminalized people going into the ‘wrong’ bathroom.” (At that moment in Laverne Cox’s speech, a woman in the crowd yelled, “I stopped that!”)

She preached some words about self-love, CeCe McDonald, and violence against trans women of color that you’ll have to watch because I was crying so I couldn’t see my keyboard. (Friday I am not wearing mascara.)

"And all of you are beautiful, smart, and amazing.”

Laverne Cox teared up and the crowd screamed “We Love You.” “I love you back,” she said. “I really do. You really don’t know.”

A voice in the audience yelled, “Take it in, baby. Take it in.”