As Althea Trix whirls across the stage, she becomes a tornado of glittering fabric, oversized hair and flashy colors. Althea Trix, a play on ‘all theatrics,’ is the stage name of Jaime Romero, and she is one of the leading ladies in Austin’s burgeoning drag scene. 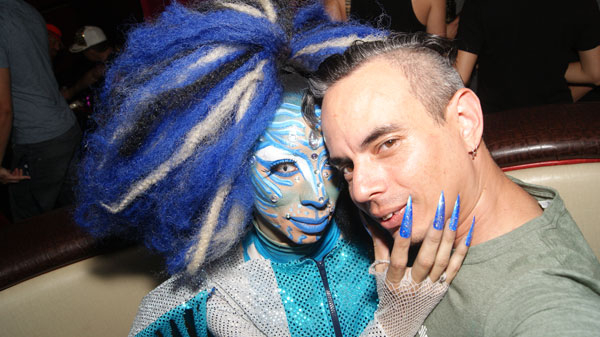 Trix calls her style ‘grotesque drag,’ but her innovative and intricately constructed costumes are more akin to fine art or haute couture. Each week, as a competitor in Drag Survivor All Stars at Oil Can Harry’s, she unveils another creation, set to that week’s theme. Her skills have earned her a spot in the final three, to be decided at the grand finale on January 1.

The show itself is so fun and effortless; it would be easy to overlook the amount of work that each performer puts in to their look. The idea, research, planning and executing of each outfit can take weeks, and is often done by hand by the performers themselves. 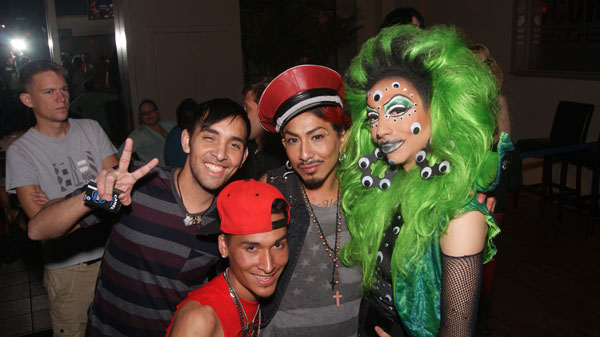 Althea and her boys (photo by Chase Martin)

“eBay is my biggest friend,” said Trix. “I’ll buy some of the weird shit there and mish-mash it with some of the stuff I’ve found somewhere else. I love making stuff. It comes down to theater, they teach you to be crafty, to sew and hot glue. You kind of have to make what you can’t find.”

The work behind the look is incredible - a recent show found Trix painted neon green, with black lipstick, white contacts, velvet elbow-length gloves with finger tentacles the same shade as her skin, a strapless dress in swirls of green, blue and black, accentuated with rhinestones and perfectly tailored to show off every curve, and wildly teased hair – and the outcome is a magnificent shift both visually and mentally. Kelly Kline, Trix’s ‘drag mother’ and longtime performer believes that drag can help a shy person become an extrovert.

“I consider drag to be a superhero costume, in a sense,” Kline said. “You can be whomever you have ever dreamt of being. I used to be a very shy person. I would get picked on and jumped in school, and that left me with no self-confidence. Drag, because I’m the person in charge and I’m the person on the microphone. It taught me to be a lot more outgoing, it taught me to love myself for who I am, and it taught me to be different.” With their powers of creativity and construction, Trix, Kline, and many other performers in Austin are broadening the drag scene, bringing in theatrical elements and working to include multiple facets of the community.

This approach hasn’t been without controversy, however. In May, Trix’s performance troupe PooPoo Platter hosted a Chola Pageant, called ‘Sequin de Mayo,’ which caused some members of the gay and Latino community to question the intent of the show. The pitch became fevered. Dialogue broke down into Internet wars. After the show, a number of the people angered by the show called a town hall meeting to air grievances about Poo Poo Platter and other local performances deemed objectionable and to allow people to speak their views.

Although the majority of the troupe is Hispanic/Latina/o, opinions expressed at the meeting said that the performers were not genuine enough to appropriate this aspect of their culture. 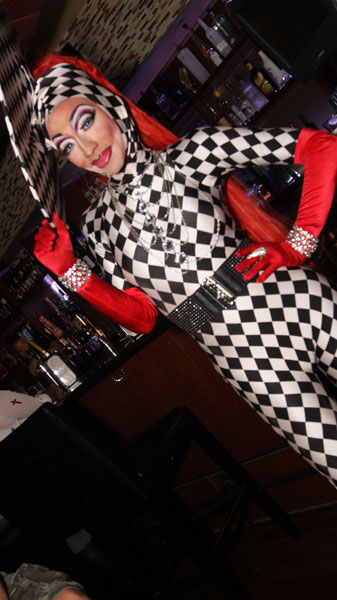 “They called us ‘white-passing’,” said Trix, “and I was like ‘I’m Hispanic!’ The controversy was an amazing moment, but when we were trying to defend ourselves to these guys that we’re Hispanic, it was really… The moment was awesome because we got to see new people, meet new people, explain our side of the story, they got to explain their side of the story.”

Regardless of objections, the show happened, but the opportunity to engage in a dialogue with the community allowed Trix and the other performers to answer their critics.

“One of the things that we kept telling people was that ‘We understand where you’re coming from, but what we’re doing is not to offend anyone, it’s just to entertain,'” said Trix. “She came out in a trashbag, and then she performed naked. I was not expecting that. I don’t think anybody was expecting that. It wasn’t like she was performing sexual or lewd acts, she was just singing and happened to be naked,” said Trix. 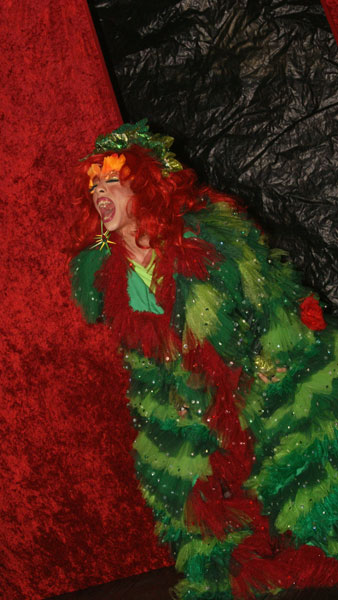 After the show, the backlash was swift and intense. Many people at the show felt that Thunderfuck was ‘trashy’ and not representative of the show, or drag in general.

“For me, it was like ‘Do y’all know Alaska?’ She gets naked all the time!'” said Trix. “Whenever she performs, it happens. She’s trashy, what were you expecting?” Although the controversies can be difficult and emotional for all involved, Trix believes that they ultimately benefit the drag scene. These performances expand the definition of drag from the narrow confines of female illusion to a much larger and more artistically free medium where performers can explore a range of themes and identities. They also spark community participation and discussions, allowing people to get involved and know their voice is being heard.

“The controversies are good, because it means that people are noticing this drag renaissance, a rebirth of drag,” Trix said.

Althea Trix can be seen Wednesdays at Oil Can Harry’s in Drag Survivor, Sunday Church at Castro's Warehouse and Friday, Jan. 10 at Elysium, where she will be performing with Poo Poo Platter.

Trix was interviewed by Claire Gordon and recently featured in an article and video in The Daily Texan.