Dan Guerrero invites you to travel back to 1950s East L.A. with ¡Gaytino! His one-man show arrives in town tomorrow for one night only at the MACC. 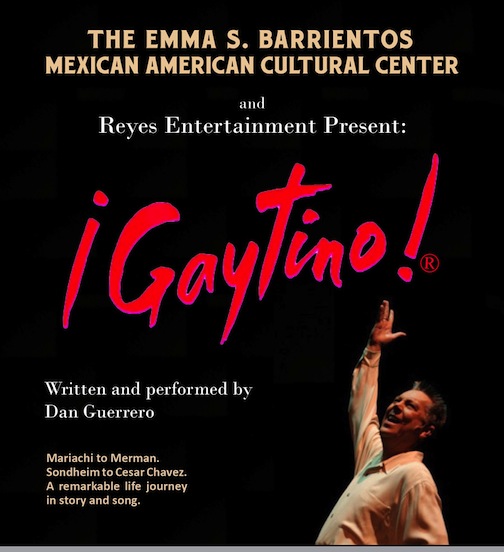 Though Guerrero’s visit is short-lived (he is squeezing in shopping and a UT Lecture) he’s betting that ¡Gaytino! will leave an impact on Austin. “I will say very equivocally is that it’s a great show,” says Guerrero, and while the 80-minute piece is autobiographical, Guerrero doesn’t necessarily think of it as his story. “It’s Latino and Chicano history, and it’s gay history.”

The show was written in what Guerrero calls a “moment of madness.” The Hollywood producer/director never expected the story to take off. Six years later he’s taken it all over the country. “People shouldn’t be fooled by the title,” he cautions. “It’s not just about being Latino. The show carries universal themes – we all have the same bloody issues.”

¡Gaytino! was created with two thoughts in mind. Guerrero wanted to educate the younger generation of the LGBTQ community. “I love our young people, I’m inspired by them – but talking to younger gays and lesbians, I realized they just don’t know," says Guerrero. Simultaneously, he wanted to celebrate his father, Lalo Guerrero, who’s been dubbed the father of Chicano music, and his childhood best friend, Carlos Almaraz, who died of AIDS in the late-Eighties but not before becoming a leading member of the Chicano art movement.

So where does 1950s East L.A. enter into the story? Guerrero single-handedly takes the audience back through the decades of his life from L.A. to the New York of the Sixties and Seventies, and back to Hollywood. According to the press release ¡Gaytino! offers a “a unique and very personal perspective” into “Mexican-American/Chicano history, and the gay experience.”

Guerrero merges music and dance to help fuel the story, including songs from both Cole Porter and his own father, but “if you hear something you don’t like it’ll be gone in three seconds anyway,” he promises. “It moves very quickly: Lump in a throat one minute, then laughing the next. It’s spiffy,” he adds. “Don’t you just love that word? Spiffy!”

The show happens Wednesday, Dec. 4 at The Emma S. Barrientos Mexican American Cultural Center, doors open at 7pm, and a Q&A follows. The event is free and open to the public. The Horror! The Horror!
The Woodlawn Theatre has cooked up a doozy. Another slice, anyone?