Texas Military Forces Back Down on Same-sex Benefits

Finally - federal benefits for all

As of late last night, the Texas National Guard will finally begin processing benefits for same sex spouses within the military. 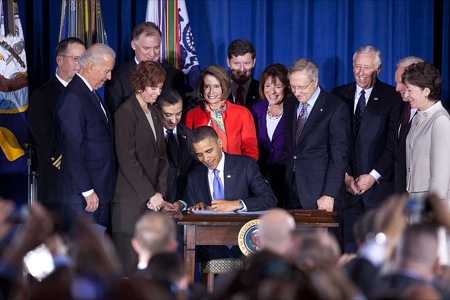 Obama signing the repeal of DADT

After several months of allowing loop halls and sending empty threats, the Department of Defense has approved a new procedure for enrolling National Guard members and their dependents for benefits.

While federal benefits were granted to same-sex partners after Section 3 of the Defense of Marriage Act was ruled unconstitutional, the Texas Military Forces argued that the Texas National Guard was a state institution. The Guard was ordered to follow state law, which does not recognize same-sex marriage. The result being that –prior to today –same-sex couples within the military have been forced to travel to federally operated bases in order to register for spousal benefits.

Starting immediately, the DOD will now provide federal personal, funding, and the federal personal systems in order to enroll all dependents in benefits programs. Overcoming a three-month standstill, this new procedure will now allow all military bases in the state of Texas, including Austin’s Camp Mabry, to process same-sex benefit requests.

In press release sent out earlier this morning, Stephen Peters, president of the American Military Partner Association applaud both the DOD and the Texas Military Forces.

"All military spouses, regardless of orientation or gender, deserve to treated with the same dignity, respect, and support for their sacrifices in support of our nation, no matter what state they serve in. We urge the remaining states who have not yet complied with Department of Defense policy to do so quickly and affirm their commitment to all military families."