Shopping for Halloween and Dia de los Muertos with Shelby Mine

Halloween, hands-down the best holiday. It's a month-long excuse to eat candy, watch scary movies ad nauseam, and get into some serious role playing (if you're into that kind of stuff). 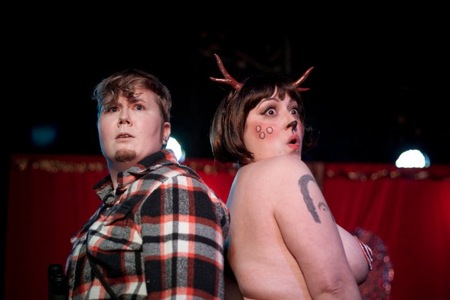 And in Texas, especially, the holiday is even more fabulous due to its proximity to Dia de los Muertos or Day of the Dead. This year, together they cover more than a weekend of celebration.

And we know that sometimes finding the perfect costume for so many occasions can cause major wardrobe fatigue. Not this year. Austin's beloved burlesque minx, Shelby Mine – one half of the Queertini Time duo, and I teamed up to help Gay Place readers figure out that perfect Halloween (or Day of the Dead or burlesque) ensemble. Last minute, natch. Our North Loop shopping extravaganza was focused on finding Shelby (known in the daytime hours as Marie Du Mond) the perfect 1960s Alien (think mod meets E.T.) costume. The outfit's inspiration and only existing accessory? A sparkly green antennae headband.

Apparently, figuring out a performance costume is more than just picking out something cute. "It's an interesting mix of creating the choreography, and designing a costume that you can take off easily," Shelby shared upon entering Room Service. Costume creation also depends on the venue, event, or length of the performance. Longer pieces require the removal of more clothing, for example, while marching in a procession or showing off on Dirty Sixth involves many other considerations.

"A lot of times you're shopping blindly," Shelby admitted. As an example, the piece she and partner Eaton Johnson are currently creating involves making Eaton a convincing astronaut who's just crash-landed on an unknown planet.

Shelby is the alien, clothing gets removed, tassels come out, they fall in love, the end. 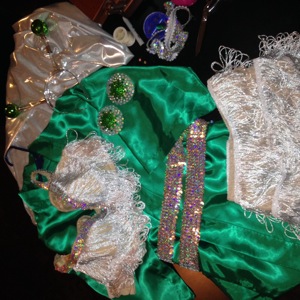 "Eaton's costume is somewhat obvious, but mine is a bit open ended," she paused to pick up a lacy green robe among other vintage lingerie-type items. "Most likely I'll be taking things off to flirt, so I'm thinking something flowy."

Shelby entered the dressing room after finding several other distracting items; despite this, we left empty-handed. The green robe didn't move the way she needed it too, and the fabric could not be easily altered. Next stop: Blue Velvet.

Partners in real life as well as on stage, Eaton (aka, ex-Chronicle intern Alexis Du Mond Puchek) and Shelby formed Queertini Time in 2004. "Originally, Alexis did drag in Kings and Things, and I joined in for group pieces," says Shelby. "We both used to perform solo more, but we have so much fun doing it together now, I haven't done a solo in years." On average, the duo tries to perform once a month. Shelby also sets the record straight: Queertini Time are burlesque performers, not dancers. 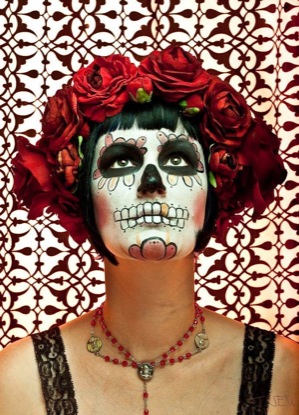 Though she loves costumes, Shelby says that Halloween can usually get lost in the midst of burlesque-life. "I'm always putting together a costume for one performance or another. I usually end up just reusing something from a performance. Or I use Halloween as an excuse to buy something I've wanted for a while and can't really afford."

So even if you're reading this today and think it too late to pull together an ensemble, fret not. There are plenty of events left this weekend. Plus, when's not a great time to shop for costumes?

Last year Shelby rediscovered her fifth-grade penguin costume. "My mother had made it for me with this pull-over mask," she explains. "It still fit, so I wore it out. I felt anonymous all night. It was very freeing and very hot," she adds humidly. Shelby's comedic timing falls into that whole 'performers not dancers' thing.

Our shopping trip came to an abrupt and unexpected end. Shelby's search had been unsuccessful, but lo and behold, mine was the bee's knees. I'd had only mentioned the possibility of doing The Great Gatsby for Halloween, and from the racks, Shelby magically extracted a teal blue flapper dress. Daisy 2013 is about to get a bit more Technicolor.

In the two weeks since we shopped, Shelby has pieced together an entire alien costume. Queertini Time will perform their Alien/Invader skit for the Danse Macbre Burlesque Show with After Dark Revue in Corpus Christi on November 2.

1. Start Online …not necessarily to purchase (buy local!) but for ideas. Look at costume websites to get those idea juices flowing. "Sometimes it's easier to recreate [or customize] an idea than it is to start from scratch," says Shelby.

2. Reduce, Recycle, and Reuse Your basic costume pieces can be crafted out of anything. While we might not all have the costume trunk of a burlesque dancer, most of us have some pieces lying around from last year, or total crap that's just dying to be made into something gorg.

3. Try on Everything Even if you think there's no way it'll work. This is Marie's number one tip: Pieces can be worn upside down or backwards. "Try to imagine new ways of using a piece of clothing," advises Marie, but also "accept that it might go wrong."

Shelby also shared some trade-secret sites: We Love Color for accessories, and Austin's Coco Coquette for wigs and make-up.

So bust out those costumes or tear into that recycle bin and craft something spectacular, cuz it's just hours from Halloween Night and there are more events happening tonight than treats in a candy basket. Feelin' hellish? Check out Christeene's Hallowe'en Ball. More into the living dead? Try the Zombie Ball. Elysium has the monopoly on Goths tonight, and Planet K thinks we should celebrate with Fireworks. Still wanting more? Check out our calendar and our Gay Place listings.

And remember, all costumes can be repurposed and retooled for this weekend's Dia De Los Muertos celebrations: , Queer Qumbia on Friday, the Día de los Muertos altar demo on Saturday and the parade to Tillery Park followed by a celebration. 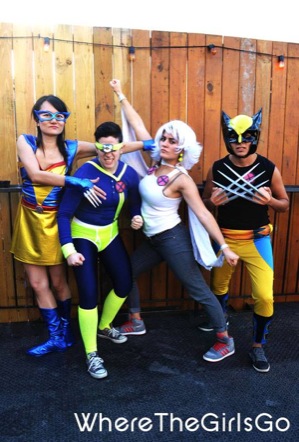