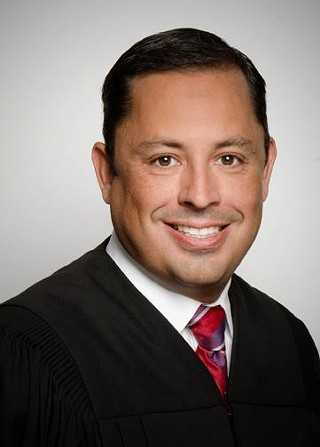 Carlo Key did not leave the Republican Party, he says, the party left him. The Bexar County judge will run for re-election under the Democratic Party.

Key made the announcement today in a pointed and poignant video in which he declares, "Justice demands fairness." Key goes on to say that justice can only be served "without prejudice towards race, color, creed, or whom you choose to love."

The party-switch comes after several months of speculation, according to MySanAntonio.com, after Key attended a Dem event featuring the beloved Wendy Davis.

The news hits amidst the recent fracas surrounding a proposal to change San Antonio's non-discrimination policies on the topics of sexual orientation and gender identity. Several times in the video, Key notes that sexual orientation (among other factors) should not "demean Texans."

San Antonio Council-member, Elisa Chan is the seeming target of much of Key's issues with the Republican Party. The video visually references her quote calling the LGBT community "disgusting" and "unfit to be parents," as reported by The Texas Observer in August. Key states that he cannot be in a party that allows "hate speech to elevate someone to higher office rather than disqualifying them" and denounces his Republican title.

Just last month, Chan announced she will be leaving her council post to run against Donna Campbell for the GOP Texas Senate seat this coming March.

"I'm proud to welcome Carlo today, because our party – the Texas Democratic Party – welcomes anyone ready to fight for a better future for all Texans."