Polari: 'Valencia' Then and Now

Valencia. The capital city of Spain. An orange. A street in San Francisco's Mission District. And Michelle Tea's memoir that tops the required reading list for recently out queers since 2000. 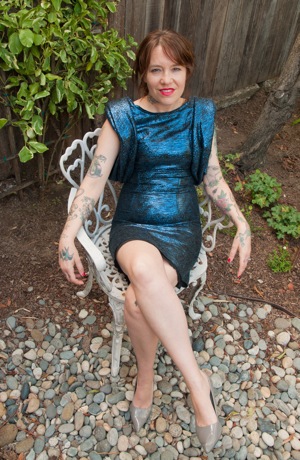 The hook? They're all playing Michelle. The episodic story was coalesced into film by 18 directors, each bringing a chapter of the book to life.

The gritty memoir about drugs, sex – knife play anyone? – writing, and, dare I say, love in young queer adulthood, helped put San Francisco on the map as not just a gay city, per se, but as a queer mecca. It could be argued that the popularity of the book might even be somewhat responsible for some of the city's Neverland effect – living off the 9-5 grid, group housing, brown-bagging it in Dolores Park, etc. Interestingly, throughout all the adventures this book reveals, nothing ever actually happens – not unlike the arc of another beloved Nineties phenom: a season of Seinfeld.

Tea considered a film version of Valencia from the start, she says. She envisioned segments, with different directors and different styles. "It seemed doable," says the writer. "I have lots of filmmaker friends, and a lot of them haven't made features because of the money and time it takes. But they've all done shorts." As her most popular book, Valencia's disjointedness made for the perfect piece to try this approach. But Tea never approached any of her filmmaker pals with the idea, "I had nothing to offer in return."

It took a film festival to get the ball rolling. One June evening, after a premiere at San Francisco's Frameline Film Festival, Tea met up with a group of friends, including directors Silas Howard, Hilary Goldberg, and Cheryl Dunye. It was there that she let the idea slip. "Everyone got really excited," she says. "They even started fighting over which chapters to direct."

The concept snowballed from there. Hilary Goldberg signed on to not only direct a chapter but to also co-produce the film with Tea. Together they set out to find the rest of the film's directors. "Every director had complete interpreter control. That's how I wanted it. And only one didn't work out – [the work] was just too avant garde it didn't fit with the rest," says Tea. In the end, only three chapters were nixed.

Tea had a difficult time making the edits required of the movie. "It felt horrible to cut them. My initial approach was to just be a total hippie about it, and let everyone do what they wanted. But when all the shorts were turned in, we had a really long film that was a lot to sit through. We were already asking a lot of our audience."

By "a lot," she means 18 different chapters, 18 different directors, 18 different Michelles (including one clay buffalo), plus a rotating cast of other characters big and small. With that in mind, they made some edits, cut some pieces, and were left with a "really great film that's true to what we wanted."

Location also rotates in Valencia. While many chapters were filmed in the book's primary locale, others were shot in Brooklyn, Portland, LA, Boston, and yes, right here in Austin. The Austin segment was shot by local artist and director, Bug Davidson.

"Bug has this John Waters vibe with their crew of vibrant actors," Tea summarizes. "I've known about them for a while through Ben McCoy, both an ex and a friend who was cast in one of Bug's films. I loved their screen tests and really wanted them to be a part of this."

"I wanted people to play with their chapters and mess things up so that it could be more reflective of the queer community today while also paying homage to the queers of the Nineties," explains a gleeful Tea. "Bug's chapter is one of my favorites. They're a visual genius, and their cast is outstanding. I love this [version of] Michelle so much; she has this innocence that's both compelling and charming.

"And I love Space. He's exactly the kinda charismatic, attractive sociopath I spent most of my life dating."

Some people might feel strange watching an actor play them – let alone 18 actors in 100 minutes – but Tea thought it was great. "I feel very affectionate for every Michelle. They all did such a great job, and I think I have little crushes on each of them." Casting was within each director's domain. "In the end I knew a lot of the cast, but I wasn't involved until after the actors were set," she explains. "I wrote the book. That was enough. If I wanted control, I would've tried to make the movie myself."

Though Tea cannot pick a favorite chapter, she does note that "Bug's piece is a standout, and Silas Howard's too." Chapter 18 director, Samuael Topiary – who's also a character in the film – shot her section of the film as a documentary on the time period to which the story is set. "It's great because you're totally immersed in this movie and then suddenly you're getting the background on where it all came from."

Valencia was released this past June onto the film festival circuit. After Austin, Valencia lands in New York for the Mix Festival and the Olympia Film Festival in Washington State. Then it goes overseas to Hamburg and Berlin. The only way to catch this film is to make it to a festival; currently there's no timeline for internet screenings. Or as Tea advises Austinites attending Polari, "You need to call in sick to work or break up with whoever is keeping you in on Saturday. Do what you can to get to the screening."

Valencia screens at Polari this Saturday at noon at the Violet Crown Cinema .

The Polari Film Festival runs through Sunday, Oct. 20 at the Stateside at the Paramount, Alamo Drafthouse at the Ritz, the Marchesa Hall & Theatre, Studio 4D at UT, and Violet Crown Cinema, plus installation screenings at the Polari offices on the weekend. See www.polarifest.com for full schedule and ticket info, and read our full Polari preview here. 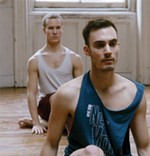 Polari: 'Five Dances'
Polari kicks off with a touching, thoughtful, and beautiful opener.