Queers, beers, but no tears: Nomi Ruiz takes gAyCL to the next level…

Hmmmmm. gAyCL in 10 words or less: Queers, kale-lime-margaritas, and one super sexy singer.

A newbie to the city, I have yet to see Cheer Up Chalie's packed as tight as Superman's junk (as I've heard it can often be), but Saturday was close: ATX queers came out in full force for the gay music festival.

Each band was on point to keep the crowd (which grew throughout the night) dancing, swaying and, even flailing a little.

It's been a while since a band literally made me LOL, but Mom Jeans with their beachy garage rock and irreverent lyrics forced the laughs right out of me. Between pleading for the audience to "Come closer, we have low self esteem! Closer! We're needy!" – which the crowd readily obliged – and their song that opens with a comparison of the spot between a girl's legs to, of all things, pizza, I was a laughing, dancing mess. And I wasn't the only one.

The sound of popping balloons and the Scissor Sisters' "Let's Have a Kiki" broke the quiet between bands, while dancers refueled with PBR and Lone Star tall boys. The event creator, GirlFriend (aka Ezra Edwards) could be seen jumping between sound systems and social groups as might be expected from any earnest, ambitious, hard-working D.I.Y. promoter.

Just after 10 o'clock, Nomi Ruiz took the gay fest to the next level. This wasn't just about her energy or the way she flipped her hair. There's something special about Ruiz. Seeing her on this intimate Texas stage was like watching a soon-to-break-out pop icon – the way I imagine some Austinites might have felt seeing Beyonce in Destiny's Child at the Travis County rodeo back in the day. Ruiz knows she's a jaw-dropper, that her moves and her music back it up, and she knew we were going to dance. Her Nu-disco beats demanded it. And just in case we didn't catch on, she told us to.

While it was the first chilly night Austin has felt in a while, the crowd, the bands, and DJ Divorcée remained drenched in sweat. The event was an overall success, even if it did start to thin out after the Twerk-off.

Still riding high from the weekend, Edwards is nothing but exclamation points and giddiness. "Nomi killed it. She loved the vibe, and was so gracious and charming. I'm already thinking about next year's gAyCL!"

It's only 363 days away. Until then, check out more photos on GirlFriend's facebook page. 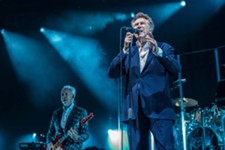