The Drink/Drank/Drunk Issue: Take You to the Gay Bar 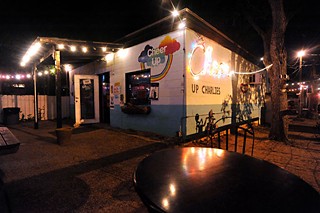 Austin's LGBTQ bar scene is and always has been vibrant and vital. We build our bars of straw, sticks, spit, and glitter. And no doubt about it: They're fabulous.

Who’s a pro at the drink, drank, drunk scene? Queers. Was there ever any doubt? Perhaps a little background might help. Picture it: New York in June, 1969. Judy Garland lay in state at Madison Square Gardens. NYPD attempted a routine raid on the Stonewall Inn, and as they did so, moved to silence the jukebox, which was playing one of Judy’s torch songs. The patrons declared “Judy stays!” A week of rioting ensued. The patrons won, and the LGBTQ civil rights movement began in earnest. We take our bar scene seriously.

So now that the scene is set, let’s talk about Austin’s gay bars. The Iron Bear (121 W 8th St) regularly packs the house with bears, cubs, otters, wolves, chubs, daddies, chasers, and everything in between, featuring an overflow crowd of gaybros and buds for Geeks Who Drink, so much so that the weekly trivia night is now biweekly. Up north, Bout Time II (6607 IH 35) provides a haven for our suburban friends, and of course, for those who like it rough, Chain Drive (504 Willow St) caters to a variety of leather, kink, and punk scenes, especially on its wildly successful monthly Gear Night, where “what it is that we do” is on proud display.

With four gay bars on the same block, our city now boasts a gayborhood, of sorts, and Austinites can enjoy more variety than ever before down in the Warehouse District. Oilcan Harry’s (211 W 4th St) is now Austin’s longest-running gay bar, with a variety of entertainments, including a Drag Survivor contest that has proven itself a proper boot camp for aspiring queens. Rain on 4th (217 W 4th St) likewise provides a number of diversions, including the uproarious Shitty Kitty Big Ball Bingo, hosted by local celebutante Rebecca Havemeyer. The new bar on the block, Red Room (219 W 4th St) promises interesting things soon to come, while Castro’s Warehouse (213 W 4th St) is starting to show its event-hosting prowess with its Sunday extravaganza, Camp Castro’s, featuring the wildest experimental drag currently found inside a gay bar in Austin.

Outside the traditional gay bars, Austin is exploding with queer culture. Elysium (705 Red River St) hosts our city’s most controversial “monthly sh*t show of drag variety,” Poo Poo Platter, whose provocative shows transgress all parameters of queer culture. Next door, TuesGays at Barbarella (615 Red River St) is easily one of Austin’s most successful current weeklies, always full to the brim of college-aged queers. Deep Inside brings top-notch dance parties all over town that venerate the hedonistic excess of gay culture before the crisis (with condoms this time around). On the East Side, Cheer Up Charlie’s (1104 E 6th St) broke the mold in creating a funky and flexible queer space that caters to the creative crowd. “We recognize the value of alcohol--it’s enabled us to keep this place open while the neighborhood gentrifies around us,” says Tamara. “We started out selling sandwiches from a trailer, hosting corner dance parties until four in the morning, and getting the bar was a dream come true, but we still specialize in fresh juices and kombucha for people like us who don’t like to drink much.”

Some of us don’t like to drink much? Sure, we’re out there, the teetotalers, the youths, and even those who might like a break from drink-centered activities and venues. The North Door (501 Brushy) hosts a number of queer events, including Shame, a periodic anarcho-queer melee, and the weekly Free and Queer Cinema, which often provides movie-themed snacks. How does an all-purpose event venue feel about hosting our community? MJ responds with an ebullient “We love it! The North Door was providing a safe space for LGBTQ events long before I joined the team, and we have no intention of stopping.” In terms of safe spaces for all ages, nobody does it like Q Austin (3408 West Ave), which hosts movie nights, town hall discussions, and other events that foster community, encourage safer sex and harm reduction, and provide HIV and STI testing in a judgment-free space.

Where are our lesbian bars? Our gay country-western bars, hip-hop bars, tejano bars? That’s a long story. Buy us a drink, and maybe we’ll tell it.