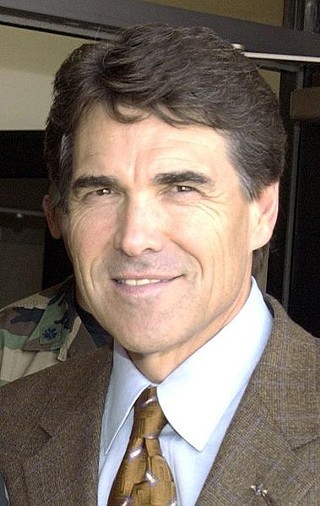 Rick Perry's believes the definition of neckwear should be one pattern, one knot (by wiki commons)

Carson Kressley tries to bring people together, Gary Bauer throws a hissy fit, and Jose Canseco really, really like us. For today's AggreGAYtor it's one, two, three strikes, you're out.

• Lawmaker Jon Kavanagh has "softened" his bill banning transgender Arizonans from using restrooms opposite of their assigned sex. Instead of a huge boulder, Kavanagh will now be only throwing large stones.

• House Republican lawyer Paul Clement's DOMA arguments before the Supreme Court are a little like a five-year old defending his decision to hit his little sister. One halfway expected him to mutter "nuh-uh" under his breath.

• Clayton Garzon will be in court today for the allegedly sexuality-motivated attack on Mikey Partida. Troublingly, the proceedings are taking place in Yolo Superior Court, known for their prosecutorial laxness. Thus your AggreGAYtor makes the world's driest YOLO joke. Drink up.

• Gary Bauer, Geppetto's aborted Pinocchio trial run, is threatening to leave the GOP if some continue to support marriage equality.

• The Kentucky House is trying to override Gov. Steve Beshear’s veto of a bill allowing godly folks to act like assholes.

• Which is just an attempt to protect those poor, poor "second class" Christian sods who make up the majority of the American electorate. It's like three quarters of our population are stuck in Les Misérables while the rest of us are hooping it up in Cabaret.

• WorldNetDaily's Susan Harris thinks that "our tiny tots are taught homosexuality before we’ve even broken them of thumb-sucking." It's as if she has never heard of a gateway drug.

• There has been considerable buzz about a possible "Queer Eye for the Straight Guy" reunion, if by "buzz" one means Carson Kressley hiring a skywriter to fly over Ted Allen's house.

• Jose Canseco's announcement in support of marriage equality trumps even Obama's evolution in watershed moments in LGBT rights. It's even bigger than Stonewall. I mean if Jesus came down and said "hey knock it off on the homophobia," it would be a letdown compared to the magnificence of having his mulletness throw us a bone.

• Although I am all for the reasons that Obsessive Compulsive Cosmetics created their new lip gloss, "lip tar" just sounds really gross.

• Several (Democratic) Texas lawmakers have taken to Twitter recently to support LGBT rights. The rest of the legislature regard Twitter as one of the signs of the coming apocalypse.

• Gov. Rick Perry wants to make it abundantly clear that when he dresses up in a Boy Scout uniform he is just trying to protect traditional values.