The return of Rachael Shannon, and her art 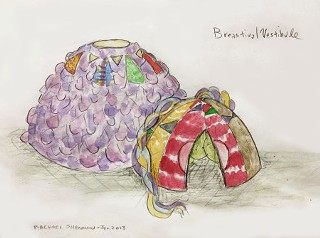 The Vestibules in 2D. (by Courtesy Rachael Shannon)

As an artist, educator, and activist Rachael Shannon places the creation of visual work at the center of a life worth living, as her online bio elegantly leads off: “Rachael Shannon is alive. Art helps with this.”

She of the H2Hos, Girls Rock Camp, Creative Action, and RedStart Design Studios is now an ex-pat Austinite, currently pursuing her MFA in Community Arts at the Maryland Institute College of Art (MICA). Attention GayBiGayGay-ers: Shannon’s back, and if you wander into two mound-like, multicolor inflatable rooms at this year’s GBGG, you’ve just found Shannon’s Breastival Vestibules. More on those in a minute, but first a word on GBGG.

Mounting GayBiGayGay has always been a manifestation of the practices of love (for more on that see Brandon Watson’s "Family Tradition", interviewing organizers Silky Shoemaker and Hazey Fairless). There’s a reason why going to GBGG feels akin to a sigh of relief – namely, it regurgitates the labors of love that go into organizing the mini-fest right back out to its attendees. There’s no question that compared to the SXBehemouth, GBGG is put on for relatively little money but to relatively greater acclaim – upending one of Capitalism’s consumer promises: the more you spend, the more you get. Community is the important synaptic disruptor here, because of the affinities and low-stakes obligations people feel towards each other, incredible change can be enacted quickly. But while picnickers pet each other, painting faces; and musicians stomp on-stage, rabbling the rousers; part of GBGG is resolutely visual. Not so long ago these stage creations were the brainchild of Shannon - multicolored trees and shipping palettes junk-sembled together like a jankity rainbow. Since then, the stage sets have gotten ever more baroque, requiring the efforts of designers and artists such as Aaron Flynn, Billy Beasty, Cindy Haws and Jimmie D. Martin Henshaw, each putting in innumerable volunteer hours. There is a strong visual signature to the one-day festival – but unlike a visual brand identity which relies on constancy, the blip-then-gone ephemerality of GBGG acts as a rejoinder, giving life to a festival of brief encounters.

But back to Shannon! On the occasion of Shannon’s brief return to Austin, we met for coffee, hours after Shannon had arrived in town, to talk school/inflatables/urbanism. Nearby, the vestibules were packed tightly in tiny duffle bags, waiting… waiting…

Rachael Shannon: It’s my second year at MICA, I’m graduating in May. Basically my thesis goes up in a week! [laughs] So it’s kind of crazy that I’m here. But I thought, if I go for GayBiGayGay, it has to be part of my thesis.

Austin Chronicle: So is the Breastival Vestibule part of your thesis then?

RS: I had an instructor I was assisting at MICA asked me what I was interested in. I told her, “Well, sculpture referencing the body… I’ve done lot of costuming… I’m interested in overflowing forms.” And she said, “I think inflatables.” And I thought, “Really?” My friend had been talking about inflatables all year and I dismissed it. I mean, inflatables sounded awesome, but not my thing. On the first day of class with this professor, we built rooms, inflatable rooms, and got inside of them. Constructed out of sheet plastic in two hours.

AC: A quick construction, then…

RS: The way she, and now I, talk about it is that working with inflatables is literally breathing life into a form.

AC: So what material do you use now – probably not plastic sheeting. Is it parachute fabric?

AC: Durable? Are you worried GayBiGayGay revelers will put a hole in it? I am!

RS: [laughs] Yeah! No smoking, people! I’m anxious as to what’s going to happen? What if my thesis gets totally fucked?

AC: But it’s meant to be used… so what do you think about that?

RS: Awesome. I’ve always been more interested in what happens outside, I’m not that interested about what happens in a gallery. This is my thesis, so it’s both, really. But the Vestibules are relic of what happens in the outside world. It has the markers of being involved. And it’s only going to continue, this summer I’m taking it to Michigan [Womyn’s Music Festival].

AC: I wish I could see that.

RS: Yeah! And what I love about the work is it can hit the road. It fits easily in a bag, and can go in a car or airplane anywhere.

AC: Do you see your work as connected to other artists – Allyson Mitchell or Faith Wilding? Do you see yourself in line with a feminist queer tradition or communities?

RS: Yeah, I do. I love Allyson’s work – she does the menstrual huts – and she’s someone from Michigan and similar queer communities, and I’ve been lucky enough to work with her. Like her, I’ve always been someone creating space. That’s what I did at RedStart. I’m creating architecture and spaces, and so in that way yes, in creating environments. Thinking about how we interact with our environments and how our environments affect us. I want to think about what kind of initiative we can take in that. I have so many different communities that I’m a part of. It’s been a process, in Austin, now in Baltimore, to balance my queer identities, and the other hands-on work I do with youth. Interesting to me where they do or don’t intersect, and trying to navigate that. But in art school I have time and space to indulge, and that’s nice. Actually, inflatables seemed right, I had all the skills already – I was a sewer! It provided me with the opportunity for growth, but based on a number of skills I already had.

AC: Are you going to stick around Baltimore after you’re done with school?

RS: I really like Baltimore. And you know, there’s not 120 people moving there every day. That’s a profound difference.

RS: I mean, I’m a native Texan, and Austin will always be my home to some degree… in some ways Baltimore and Austin have a lot in common. I can feel in Baltimore now, some of what Austin has been. At the same time, I don’t know if I can stick around and watch Baltimore go through the same set of changes that Austin has been through – and that’s starting, and the growth is slower in Baltimore for any number of reasons. It’ll always be different, the demographics, the history of the town… Already, I see it, though.

AC: I’ve found that SXSW throws that growth and change into violent relief.

RS: Because of my time in Austin I have to hold my tongue a little in Baltimore, I want to say, “…but you know what that means…? Oh, our inner-city thrift store just closed? That means they’re going to tear down that housing development, people are going to be kicked out of town and the area will become unaffordable to the people who once lived here.” Once I saw that happen in Austin, it made me suspicious all the time.

AC: Is that something that comes into your own practice, a discussion of urban structures (d)evolve/develop?

RS: Of course, art is where it starts. People get really excited about art, but then that’s riddled with all these complications. I have twenty stories about that right now, because this one area around MICA is being developed – Station North. Now it’s known as Station North, when for years it was just… the neighborhood around the station. That’s step one. They had a plan, a long term plan, that some artists were a part of! The curatorial program at my school is very involved in collaborating what’s going on there. It’s a great opportunity for them, and they can affect positive change. They’ve done some interesting projects, for example, trying to highlight local businesses by putting art inside of those businesses. It’s neither totally good nor totally bad. Baltimore’s kind of one of the last cities to go through that because it’s been stuck in a negative growth pattern, and that’s not good either. If this change goes slowly enough, and knowing how urbanism has taken place across the US – my question really is can this change happen gracefully? And can positive change be enacted? And that’s where I have to check my hopelessness… which doesn’t feel good to me either. 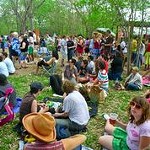 Family Tradition
The fall and rise of Gaybigaygay

GayBiGayGay Line-Up Announced!
Here's what we know about the line-up at the annual free post-SX gay fest