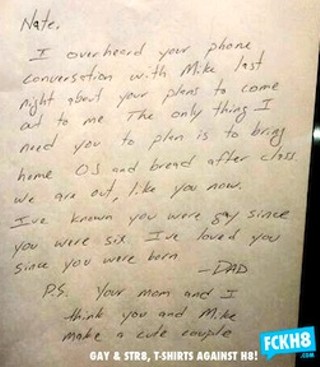 Rob Portman does an about face, Robert Jefress goves some safety tips. and Rachel Maddow only answers some things. Today's AggreGAYtor will not go gentle into that good night.

• GLAAD is excluding the New York Post from its annual media awards, but I'm sure if they say "journalism is for fags" all will be forgiven.

• Marco Rubio, the precocious student body president of Roy Cohn Elementary, wants you to know that even though he doesn't want to share his toys with gays; that doesn't make him mean. In an interview by the monkey bars, he added "get off my case, toilet face!"

• GOP Sen. Rob Portman has come out for marriage equality after his son came out as, well, unequal. If we can just get all lawmakers a queer child, maybe we'll win this thing! I am nominating Angelina Jolie for the task.

• Some readers of the Denver Post got their sweaters in a bunch after the paper ran a photo of (gasp) Colorado House Speaker Mark Ferrandino kissing his husband.

• Why does NOM's "March for Marriage" even have musical acts? I mean there can't be that many clever rhymes for "abomination."

• We love you Rachel Maddow, really we do. But you did know beforehand that the Reddit section is called "ask me anything," right? If not, I'm gonna kick Chris Matthews ass.

• Sometimes people are just too adorbs!

• Pastor Robert Jeffress warns his flock that plugging into the wrong outlet could get them blown to "smithereens." That's all well and good, I just don't understand what electrical safety has to do with homosexuality. Is Louie the Lightning Bug family? You be the judge.

We called it! It really IS the queerest SXSW ever! Everybody thinks so.