And not 'weird' in a 'Keep Austin Weird' good way 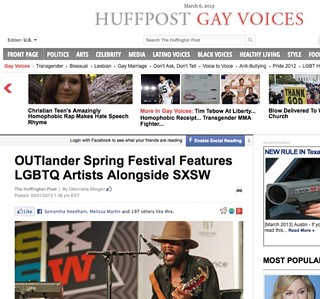 Austin's sweet, LGBTQ music/multimedia fest has gotten some national blog love this week; too bad Autostraddle and HuffPo totally screwed it up.

There is so much wrong with the recent posts on both Autostraddle and HuffPo (both rightfully praise OUTlander, Austin's beloved off-SXSW-property alt-gay music fest) that I don't know where to begin.

Awwww, gee whiz, Kate X, why dwell on the negative? I mean, love is love. Any press is good press. What's a few details among friends, right?

Unfortunately, both posts are very misleading.

Autostraddle botches it up right out the gate: "After noticing a surprising lack of LGBTQ media at Austin's annual South by Southwest Festival," they imply, OUTlander was born. But that's not true. The OUTlander Project, as clearly stated at the first click of their website, "...works to promote artists of all creative classes and their works to the LGBTQ community," a mission they have nobly carried on since they premiered in 2010, not, as posited by the blogger as compensation for being ignored by SXSW.

It took one click of the OUTlander website and one phone call to founder Chase Martin to clear that up.

"No, I don't know where that came from. That wasn't us," says Chase. "In fact, I called [co-founder] Melissa and asked her if she'd signed off on that. She hadn't."

Chase was quick to clarify that OUTlander brings in talent across the spectrum, not just LGBT, and that the main goal is to entertain an LGBTQ crowd.

What else is wrong with the post? Welp, in that one call to Chase, we also learned that the Autostaddle blogger is connected to One More Lesbian, one of OUTlander's co-promoters for their video/film component of the fest. Girl. Advocacy journalism is fine. So is PR. But state your bias and your involvement.

In shifting focus, we see the same misleading tripe over at HuffPo. Their lede, "As an answer to the lack of lesbian, gay, bisexual, transgender and questioning (LGBTQ) artists at Texas... annual South By Southwest (SXSW) music festival, The OUTlander Spring Festival has emerged," pretty much takes Autostaddle's lead/lede and dials in one more round of a confusing telephone game.

Part of what tweaked me about these erroneous conclusions is that HuffPo and AutoStraddle get hits. Lots of hits. They are gay bibles to folks outside of places with active LGBTQ media; they also enjoy clout in saturated media realms as well. Additionally, there is an implied authority of journalistic standard in both of their missions. As a result of their global reach, now this frame, this angle, this total bullshit is part of the narrative of the LGBTQ and SXSW relationship. And, in actuality, that relationship has a warm history that goes deeper than either of these blogger-lites give credit or will ever know.

If you are a "Gay Place" regular, you know a few things about us:

1. Our paper shares owners with SXSW, yet the two are separate entities.

2. I have been going to and covering SXSW for over 20 years.

3. I was invited three years ago by SXSW to host the annual official LGBTQ Meet Up and have been doing so ever since.

4. The Gay Place has covered the LGBTQ beat -- been critical of it when we felt necessary, and have given credit when due -- during SXSW for years. We'd be so bold as to suggest, neigh, boast that it may even be that our focus -- on the impressive LGBTQ programming and the fact that so many queers come in official capacity every year -- may have something to do with national outlets picking up on the LGBTQ/SXSW connection in the first place (years ago, kids, sorry if this pre-dates you).

These two limp posts also imply that other LGBTQ offshoots have never impacted the degree of gay visibility at SXSW. Tell this to the internationally beloved GayBiGayGay (our blog just released its line-up this afternoon).

And HuffPo: What is up with that picture of Gary Clark, Jr.? (Wait, is he gay? Let's ask his Swedish model GF.) That shot is from an official SXSW show. This leads me to believe that both of these bloggers do not fully grasp the variety of offshoot festivals that occur across the date span of official SXSW, which, still, let us not forget, dear readers, is at its heart, an industry conference.

The HuffPo puff also ends with some mind-boggling parallels/assertions:

"Although LGBTQ artists won't be highlighted too much at SXSW, Latinos will be front-and-center. The popular music festival has devoted an entire section of its website to Latin Rock and one of the most highly discussed lectures will be 'Latinos y Mobile.' " Um, HuffPo, why don't you ask the Grammys why there is a Latin Grammys? While you're at it, ask them why there is no gay Grammy.

Sure, the array of "Latino"-focused official SXSW is impressive. Yet, had the author simply plugged a few key words into the SXSW search engine or just asked, she might have learned that the LGBTQ programming this year is on par with, if not exceeding that list.

Seriously, my young friends, this dressing down is nothing personal. But to gloss over details in favor of a clever angle risks losing the importance of those details. There is a huge story here and no one has yet told it nationally. (HINT!!!!!) And in the case of an unprecedented showing at SXSW of LGBTQIAllied talent, you ignore history, deny what progress has been made, and potentially insult our allies. And, on top of all this, your cluelessness implies that my job is por nada. Welcome to Austin. Welcome to SXSW. If you have any questions, just ask.

OUTlander: We love you. We love what you do. We love that some national love has landed on you. But, geeez, we wish those national bloggers had stepped up to their forum and taken the time to really understand why what you do is so important and that there is some context to this story beyond inaccurate soundbites and grasp for an angle.

Also, Chase, our blogger Liz is calling you right now to file our story on ya. We've been a little busy over here. Maybe our version could get out there in the ether, too? We promise to ask you questions and check our facts.